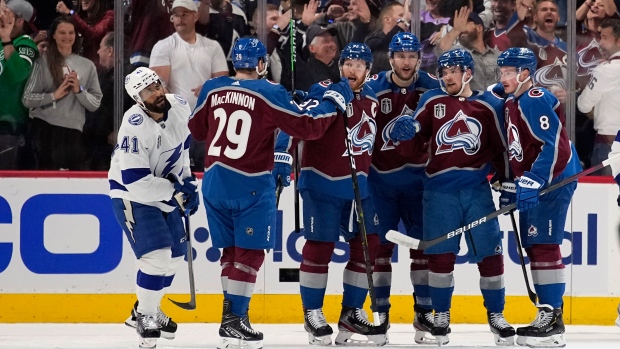 The Colorado Avalanche have gone wire-to-wire as the Stanley Cup favourite this season.

In Game 1 of the Stanley Cup Final, they showed the entire hockey world that they deserve that distinction.

Each of the previous eight went on to win it all.

The Avalanche also became just the fifth team in NHL history to win 13 of their first 15 games in a single postseason.

Each of the previous four won the Stanley Cup.

Nobody is going to write off Tampa Bay after one loss.

However, after a dominant performance from Colorado in Game 1, the Lightning are getting just a 30.3 per cent implied Stanley Cup win probability based on the updated odds at FanDuel Sportsbook.

Burakovsky The OT Hero For Avalanche In Game 1

Andre Burakovsky was the hero for the Avalanche with the overtime winner in Game 1.

Colorado closed as a -146 home favourite at FanDuel.

Late money pushed the total to 6.5 just before puck drop, and the over hit despite a scoreless third period.

The over hit on both team totals with the Avalanche at 3.5 and the Lightning at 2.5.

Game 1 in OT. Right in the feels for @Avalanche fans.

This #StanleyCup Final is going to be fun. pic.twitter.com/Mzi2uyGPKo

Mikko Rantanen, Gabriel Landeskog and Valeri Nichushkin led the way for Colorado with two points each.

Landeskog to score and Colorado to win was +285.

—@andreburakovsky after scoring the game-winning goal in Game 1 of the #StanleyCup Final pic.twitter.com/m3KXYcKILu

If it wasn’t for the glaring goaltending disparity, the opener might have very well been a lot more lopsided.

Andrei Vasilevskiy turned aside 34 of the 37 shots he faced, including several outstanding saves.

Anybody that bet Vasilevskiy over 32.5 saves early on Wednesday cashed late in the third period.

Anybody that bet Vasilevskiy over 33.5 saves later in the afternoon and evening needed overtime to get there.

Meanwhile, Darcy Kuemper got the win despite making just 20 saves on 23 shots.

The over/under on his saves prop at FanDuel was 28.5.

#Avs Darcy Kuemper on Vasilevskiy: "He's the best goalie in the world. I can't worry about trying to outplay him I just need to go out and play my game." pic.twitter.com/f9fnmx8e0c

Looking ahead to Game 2 on Saturday night, FanDuel has Colorado at -144 on the money line.

Tampa Bay is currently +122 to earn the split on the road.

The total currently sits at six goals, but it’s juiced to the over at -120.

As for the adjusted Stanley Cup winner odds, the Avalanche went from -175 to -270 after taking a 1-0 series lead.

Tampa Bay lost Game 1 in the first round against both the Toronto Maple Leafs and Game 1 in the Eastern Conference Finals against the New York Rangers, then went on to win the series.

In fact, they went down 2-0 to the Rangers and then won four straight to advance to the Stanley Cup Final.

As I mentioned off the top, nobody is going to write off the two-time defending champs following a Game 1 loss.

However, according to ESPN Stats & Info, no team in NHL history has ever trailed 2-0 in both the Conference Finals and the Stanley Cup Final in the same postseason and gone on to win the Stanley Cup.

All eyes will be on the Lightning to see how they respond in a highly anticipated Game 2 on Saturday night.

Can Celtics Avoid Elimination In Game 6?

The Boston Celtics are undefeated when facing elimination so far this postseason.

They’ll need another win tonight in order to keep their season alive.

sharpening up for Game 6 pic.twitter.com/DpAzwVMW5f

FanDuel has Boston as a 3.5-point favourite for Game 6 of the NBA Finals tonight.

The Golden State Warriors are +136 to close out the series tonight on the road.

Seven years ago today, the Dubs brought a title to The Bay for the first time in 40 years 🏆 pic.twitter.com/H1og0iZskn

Only one team in NBA history has gone 5-0 when facing elimination in a single postseason.

The Celtics will need to match that record in order to win the title.

As for the adjusted NBA championship winner odds, the Warriors are now -400 at FanDuel.

The last team to blow a 3-2 lead in the NBA Finals was the Warriors in 2015-16 against LeBron James and the Cleveland Cavaliers.

Boston is +300 to win the championship at FanDuel.

Coming off consecutive losses for the first time since late March, it will be very interesting to see how the Celtics respond on their home floor.

Jayson Tatum can't wait to see the @celtics fans in the arena tomorrow in Game 6. #AllAbout18

Jayson Tatum and company have been at their best when their backs are against the wall, but in order to have a chance tonight they will need to hit their shots and cut down on the turnovers that have plagued them in this series.

While I lean Boston -3.5 for Game 6, I’ve run it back with the exact FanDuel Same Game Parlays I cashed with in Game 5 as my first two bets for tonight’s game.

Everyone is talking about Andrew Wiggins' unheralded impact on the defensive end. @chengwesley highlights two sets of stats which translate to the optimal ‘Wiggins Island Same Game Parlay’ if you’re all-in on the 2014 No.1 draft pick.

Next, the “Andrew Wiggins please send Steph some help SGP” was easy money in Game 5.

Andrew Wiggins had 26 points and 13 rebounds in the Warriors' Game 5 win.

It is the first time all season and the first time in his playoff career he led his team outright in both points and rebounds. h/t @EliasSports pic.twitter.com/OqeIpnubPX

I’ll run it back with Wiggins 15+ points and 6+ rebounds.

The Toronto Argonauts will open their 2022 season against the Montreal Alouettes at BMO Field tonight.

FanDuel has Toronto as a 3.5-point favourite, which is a slight tick up from -3 on Wednesday.

BOUT TO BE A MOVIE TONIGHT 🍿 pic.twitter.com/sLx3o8LOCo

That number could continue to climb as it’s currently juiced to the over at -115.

We've got some early leans to consider for Week 2 of the CFL season! 🍁🏈 pic.twitter.com/FgFIUNCK4H

We’ll be back with our CFL Week 2 preview on Twitter spaces at 12:30 ET today.

Make sure you give us a follow @TSN_EDGE and tune in for our best bets for Week 2 in the CFL.