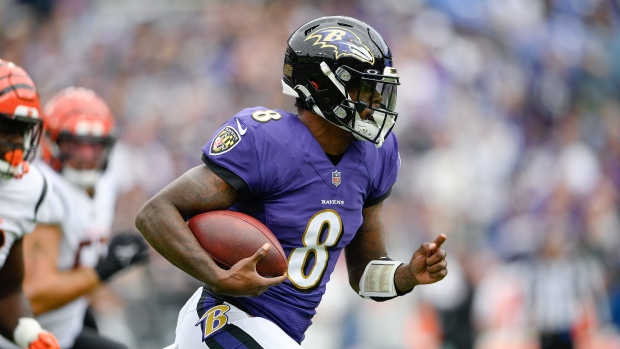 Remembrance Day has always been an important day for my family.

With two grandparents who served and lived to share their experiences with me, I’ve always felt an overwhelming sense of gratitude and debt towards those who served, and it has always been amplified on November 11.

Today, on the 100th anniversary of the Remembrance Day poppy in Canada, I’ll start with a sincere thank you to every soldier who has made the ultimate sacrifice so that we could enjoy the rights and freedoms in this country that could be so easily taken for granted.

Today, we remember them.

After a wild Week 9 in the NFL, it’s time to officially turn the page to Week 10, beginning with Thursday Night Football on TSN.

The Baltimore Ravens will visit the Miami Dolphins in a prime-time showdown.

The Ravens opened as a seven-point favourite, but that number has inched up to -7.5 and I wouldn’t be surprised if we see it reach -8 and -8.5 at some spots before kickoff.

Baltimore is 9-0 against the spread versus Miami under John Harbaugh.

Per ESPN Stats & Info, that’s the most games any coach has coached versus a single opponent while covering the spread in every single game, in the Super Bowl era.

The Ravens are 5-1 against the spread in their past six contests heading into tonight’s game, and even coming off a week in which underdogs went 10-4 ATS, I’m not willing to take the points with the Dolphins in this spot.

Tua Tagovailoa’s fractured middle finger is not expected to keep him out long-term. However, with a quick turnaround for Thursday Night Football this week, his status for Week 10 against the Ravens now also is in question. https://t.co/6gTeQCZ6rZ

Miami has been competitive against some of the worst teams on its schedule but suffered double-digit losses in three games against the Buffalo Bills and Tampa Bay Buccaneers.

The Ravens have scored 31 points or more in each of their last three wins, and I’m not counting on Jacoby Brissett and a Dolphins’ offence that ranks 30th in the NFL in points per possession to keep up with them.

I bet Baltimore -6.5 earlier in the week, but that number is long gone at this point.

Now that the spread is up over a touchdown, I think the best bet is to use the Ravens as a teaser option to start the week.

Flight to Miami is packed with Ravens fans. The #RavensFlock always shows up, home or away!

I’ll offer up Baltimore with another AFC North team in the Cleveland Browns, currently a 1.5-point underdog against the New England Patriots.

I’ll tweet out some player props I like later in the day, but I’ll lock in Baltimore and Cleveland on a two-team tease as my best bet for this column.

Jack Campbell made 36 saves as the Toronto Maple Leafs (-135) beat the Philadelphia Flyers 3-0 on Wednesday night.

Campbell improved to 7-3-1 with a 1.90 goals-against average and a .936 save percentage this season.

The Maple Leafs have held their opponents under their team total in five of Campbell’s past six starts overall.

From @JayOnSC: Jack Campbell made 36 saves for his second shutout of the season... @mike_p_johnson & @JayOnrait take a closer look at Campbell's game and if his hot play can get him in the conversation for Team USA's Olympic team: https://t.co/nrAYmywtBZ#TSNHockey pic.twitter.com/aETHDsljmW

With John Tavares sidelined by an injury, William Nylander stepped up with two goals. Auston Matthews assisted on both of them.

The Nashville Predators (+130) beat the Dallas Stars 4-2 in the lone upset of the night.

The Boston Celtics (-3.5) handed the Toronto Raptors their first road loss of the season with a 104-88 win on Wednesday night.

Scrap it and move on. pic.twitter.com/RD0qzcbFAp

The Raptors entered last night 4-0 straight up and against the spread on the road.

Per the Elias Sports Bureau, only two Eastern Conference teams have opened a season 5-0 on the road over the past 12 years.

It will be a quick turnaround for the Raptors as they visit the Philadelphia 76ers tonight.

Despite Joel Embiid being out, the 76ers are currently a three-point favourite.

The Hamilton Tiger-Cats (-0.5) and Toronto Argonauts are set for a massive showdown this Friday on TSN.

The stakes will be high when the Tiger-Cats (-0.5) visit the Argonauts in an East Division showdown this Friday night at BMO Field. @MattDuniganTSN breaks down what's on the line in this week's CFL Spotlight. https://t.co/sKqg0tS46W pic.twitter.com/p3kiX4DLpV

The Argonauts can clinch top spot in the East with a win at BMO Field.

Hamilton can clinch the tiebreaker versus Toronto, which would set up an important home game against the Saskatchewan Roughriders in Week 16.

Meanwhile, the number for this week’s game between the Montreal Alouettes and the Winnipeg Blue Bombers has garnered some attention after it was confirmed that Zach Collaros would not start.

Sean McGuire will make his first career start for Winnipeg on Saturday night.

The Blue Bombers opened as an 8.5-point favourite, but that number is already down to Winnipeg -7.5 as of this morning.