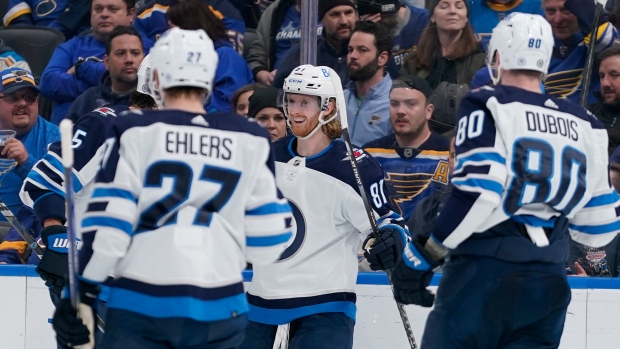 The Winnipeg Jets are four points out of a playoff spot with 22 games remaining.

If the Jets are going to make a serious push in a tight Western Conference playoff race, they are going to need to pick up some crucial points over the next eight days.

Winnipeg, which has won three of its past four to close the gap on the final wild-card spot, will play six of its next seven games on home ice, including two games against the team that they are chasing for eighth in the West in the Vegas Golden Knights.

With the Golden Knights really struggling over the past couple of weeks, can the Jets take advantage tonight as a small favourite?

Winnipeg will play Vegas twice over the next eight days.

If they can win both of those games against the Golden Knights, it could go a long way towards improving their playoff chances.

As of this morning, six teams are separated by just four points in the standings in the race for that final Wild Card spot.

The Jets are currently four points back of Vegas and the Edmonton Oilers, which are which are tied for third in the Pacific Division with 68 points, with the Oilers holding two games in hand on the Golden Knights.

In addition to playing the Golden Knights twice, the Jets will get the Boston Bruins, Ottawa Senators, Columbus Blue Jackets and Arizona Coyotes on home ice between now and March 30.

For what it’s worth, only three of those next eight games are against opponents that are currently in a playoff spot, with two of them against a Vegas side that has lost four straight and is 3-7-0 over its last 10 games.

The Jets are currently a -125 favourite for tonight’s game against the Golden Knights.

With a favourable schedule, how Winnipeg performs over the next seven days should have a significant impact on how the team approaches the NHL trade deadline.

If they can begin this crucial stretch with a win over Vegas tonight, it should lead to another major adjustment to their playoff odds.

Lawson Crouse became the eighth player in franchise history to score at even strength, on the powerplay and shorthanded as the Arizona Coyotes beat the Ottawa Senators 5-3 in the lone NHL game on the schedule Monday night.

Despite being held to just 15 shots, Arizona scored five goals.

The Coyotes have now scored five or more goals in four of their last five games and are 5-1-0 in the month of March.

Meanwhile, the Senators have now scored three goals or more in four straight games, going over on their team total for the fourth game in a row.

However, Ottawa has also allowed five or more goals in back-to-back losses to Arizona and the Chicago Blackhawks.

The Senators are back in action on Wednesday against the Columbus Blue Jackets.

Steph Curry and Trae Young went off for 47 points and 46 points, respectively to lead their teams to wins on Monday night.

Karl-Anthony Towns topped both, becoming just the fifth centre in NBA history to score 60 points in a game.

Towns, who finished with 60 points and 17 rebounds in a 149-139 win over the San Antonio Spurs, became the first centre to hit that point total since Shaquille O’Neal did it on his birthday in 2000.

Curry celebrated his 34th birthday with 47 points, six assists and six rebounds to lead the Golden State Warriors (-12) to a 126-112 win over the Washington Wizards.

Steph Curry celebrated his 34th birthday with a game-high 47 points against the Wizards! 🎂 🥳

Shout out to the entire TSN EDGE club for riding Curry’s alternate points props with me, including our guy Christian Marin who also pointed out Curry’s combined points, rebounds and assists prop at 33.5, and “The Big E” Eric Cohen, who gives the TSN EDGE club every night of the week and still shouts us out when we give him one winning angle.

Young, who scored 47 against the Indiana Pacers on Sunday, became the first Hawks’ player to register consecutive 45-point games since Dominique Wilkins in 1988.

Scottie Barnes cashed the over on his points prop early in the second quarter as the Toronto Raptors (-5) cruised to a 114-103 win over the Los Angeles Lakers.

🚨 Scottie Barnes over 15.5 points has already cashed early in the 2nd quarter in LA!💰🔥 pic.twitter.com/XTiaLXVcak

Raptors -5 was never in doubt! 💰😅 pic.twitter.com/JvqUE5JR7a

Suddenly, the Raptors are just one game back of the Cleveland Cavaliers for sixth place in the Eastern Conference.

Jokic gets win in battle of MVP favourites

Joel Embiid scored a game-high 34 points, but it wasn’t enough as Nikola Jokic scored a team-high 22 points with 13 rebounds and eight assists to lead the Denver Nuggets (+3) to a 114-110 win over the Philadelphia 76ers.

The final head-to-head meeting between the top two choices to win NBA MVP didn’t have any impact on the betting odds, either.

Embiid remains the favourite to win that award at -130, while Jokic is a close second choice at +140.

Aye jokic. That was a DIME. pic.twitter.com/KuxwwPYeAv

No other player has shorter odds than Giannis Antetokounmpo at +950.

The March Madness is about to get underway with two “First Four” games tonight and two tomorrow.

"Legends are made in March." 🐐

Relive some of these ICONIC moments in #MarchMadness pic.twitter.com/ZuBsnLOUyZ

As of this morning, Texas Southern is a 3.5-point favourite versus Texas A&M-CC, with the total at 136.

Indiana is a four-point favourite versus Wyoming, with the total at 133.

The Jacksonville Jaguars were the biggest spenders on the opening day of NFL free agency on Monday.

While a lot was made about the number that Kirk received, Jacksonville’s free agent haul led to some slight adjustments in NFL futures markets.

Thank you Steelers! I know Pittsburgh fans are going freak out, but I think Mitch Trubisky is a good bridge situation. Tough division, can't go into this season with Rudolph and Haskins.

The Steelers, which were rumoured to be in the market for Deshaun Watson among others this off-season, went from 55-to-1 to 70-to-1 to win the Super Bowl following the deal.