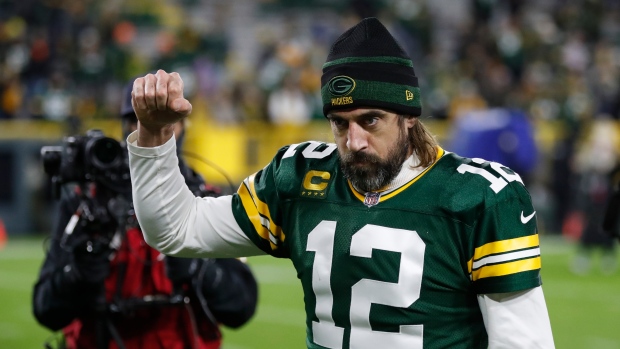 Aaron Rodgers is the consensus favourite to win NFL regular-season MVP among oddsmakers.

As of Monday morning, Rodgers could be found at -400 to win that award – an 80 per cent implied win probability.

For perspective, Tom Brady is the consensus second choice at +550 – just a 15 per cent implied probability. That’s a significant disparity.

However, despite Rodgers being the overwhelming favourite to win MVP, we learned on Tuesday that at least one voter does not intend to choose Rodgers as MVP.

And based on his comments, the decision not to vote for Rodgers has nothing to do with the Packers quarterback’s performance on the field.

Just when it seemed like Rodgers had solidified his status as the obvious favourite to win MVP, one voter offered up a different perspective on Tuesday.

Hub Arkush, who is a member of the Associated press and one of 50 voters who will decide the NFL regular-season MVP winner, made his feelings about Rodgers clear in a radio show appearance on Tuesday.

“I don’t think you can be the biggest jerk in the league and punish your team, and your organization and your fan base the way he did and be the Most Valuable Player,” Arkush said during the segment.

“Has he been the most valuable player on the field? Yea, you could make that argument,” Arkush continued.

“I don’t think he is clearly that much more valuable than Jonathan Taylor or Cooper Kupp, maybe even Tom Brady. So, from where I sit, the rest of it is why he’s not going to be my choice.”

“He’s a bad guy, you know? And I don’t think a bad guy can be the most valuable guy at the same time.”

So, while Rodgers is the top choice to win MVP entering Week 18, we now know that at least one voter won’t select Rodgers to win MVP.

We also learned that other voters might approach the MVP vote with the same perspective.

“A lot of voters don’t approach it the way I do, but others do, who I’ve spoken to,” Arkush continued.

It didn’t take long for the segment to go viral and reaction to pour in from around the football world.

And we let guys like @Hub_Arkush vote for awards and all-pros. Real flaw system. Trash stystem of picking who votes. https://t.co/CJsNEYxK57

I’m certainly not implying that this has anything to do with Arkush’s perspective, but the fact that he is based in Chicago certainly seemed to fuel even more negative reaction from Packers fans.

In terms of what he’s done on the field, it’s clear that Rodgers deserves to be the frontrunner.

I thought the award was for the best player in the NFL not who’s on your diner guest list. This is so bad. But one of the flaws with the Hall of Fame voting as well. https://t.co/sTtEECULVi

Rodgers leads the league in QBR and passer rating, touchdown percentage and interception percentage, and Green Bay owns the best record in the NFL.

I have come to dislike Aaron Rodgers this season because he spews misinformation about the COVID-19 pandemic and the vaccines. I also think he is a great quarterback. And I also think Hub Arkush should be stripped of his MVP vote for this. https://t.co/pheUvQEgnn

However, now that we know that at least one voter - and potentially more - won’t be choosing the Green Bay QB to win MVP, can we justify the fact that he is -400 to win the award?

Despite the comments, I still find it hard to believe that voters would take either Taylor or Brady over Rodgers to win MVP, so I’m not going to bet on either one of them.

The betting favourites continued to shine on the ice on Tuesday night.

NHL favourites went a combined 7-1, with the lone upset by the Nashville Predators, which were just +100 to beat the Vegas Golden Knights.

A self-pass and a backhand finish?

I’m sure we will eventually see the underdogs make a push, but I’m not betting on it happening this week.

The best teams in the NHL for the most part tend to be the deepest, and I think that depth will continue to shine with so many clubs missing key players.

Fred VanVleet went off for a game-high 33 points with seven assists as the Toronto Raptors (-7) beat the San Antonio Spurs 129-104 on Tuesday night.

Toronto has won three in a row outright. The Raptors have also covered four straight and are 8-1 against the spread over their past nine games.

Justin Champagnie on Fred VanVleet: "All-Star. What he's doing is incredible... He's been putting on a show for everybody to see that he deserves to be an all-star. Me, personally, not being biassed, I think he deserves it. He's been doing his thing and it's fun to watch, man."

They’ll be back in action on Wednesday night against the Milwaukee Bucks. The defending champs should be motivated after they lost outright to the Detroit Pistons as a 17-point favourite on Monday night.

NBA favourites went 4-1 straight up and ATS on Tuesday night. The totals also went 4-1 to the over.