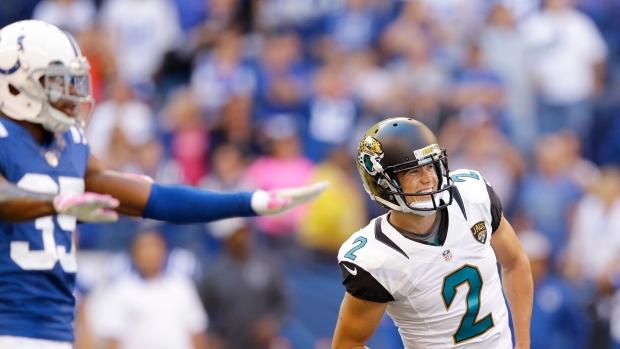 With a right shoulder injury keeping Luck out of an NFL game for the first time, the Colts quarterback pumped his fist repeatedly as 40-year-old quarterback Matt Hasselbeck and 42-year-old kicker Adam Vinatieri celebrated their personal throwback day. Hasselbeck led the Colts on a 53-yard drive in overtime Sunday and Vinatieri finished it with a 27-yard field goal for a 16-13 victory over Jacksonville.

"We kind of hugged it out for a second," Vinatieri said. "He (Hasselbeck) does a great job. Watching him have the opportunity to go out there — hate saying 'at his age' because he's younger than I am — but I know he wanted that."

Not bad for a couple of guys who some thought were already on borrowed time.

Hasselbeck deftly managed his first start in nearly three years, going 30 of 47 for 282 yards with one TD, no interceptions and fooling the Jaguars' defence with a late bootleg that put the Colts (2-2) easily in field-goal range.

Vinatieri broke Mike Vanderjagt's franchise scoring record with his first field goal, a 54-yarder, then became the first player in NFL history to top 1,000 points with two different teams on his second field goal, a 32-yarder. He won it with this third kick.

Thirty-two-year-old running back Frank Gore, who finished with 17 carries for 53 yards, ripped off a 22-yarder on his final run to get the ball to the Jacksonville 7-yard line.

All Hasselbeck had to do then was position the ball in the middle of the field and watch Vinatieri make the chip shot to put Indianapolis back on top of the AFC South. It also allowed Indy to tie the NFL record for consecutive wins against one division (15), which was set by the 1972-73 Miami Dolphins.

The Colts can break the record Thursday night at Houston — with or without Luck, who remains day to day.

"I cherish it," Hasselbeck said. "I never get emotional over anything, really. I got a little emotional running off the field. It was really special. I didn't even expect to play."

For the Jags (1-3), it was another frustrating finish.

Blake Bortles played well enough to win, going 28 of 50 for 298 yards with one touchdown. Rookie T.J. Yeldon ran 22 times for 105 yards. Allen Hurns caught a career high 11 passes for a season-high 116 yards and one TD.

He missed a 53-yarder wide right with 6 seconds left, then got a do-over because the Colts called timeout. The next one sailed wide right, too.

Myers' next chance came with 8:13 left in overtime — pushing that one wide left.

Hasselbeck took advantage of the field position to drive Indy for the winning score.

"It's hard, because if you make one of those field goals, we're in the locker room talking about the tremendous effort, the competitiveness, getting turnovers, scoring off the sudden change," coach Gus Bradley said. "We're talking about all these things that led to that. They're still there. But we're not quite there yet. We're close."

Luck spent most of the day coaching. Dressed in street clothes and a grey baseball hat, he clapped his hands, counselled teammates after plays and even handed water to Hasselbeck. And when Myers missed the 48-yarder, Luck pumped his fist.

That was all he could do.

Without him, some of Indy's previous problems resurfaced.

Gore fumbled near the goal line. Three times, the Colts reached the red zone and settled for field goals, and there were times the defence struggled to get off the field.

But after Myers' made it 13-10 with 4 seconds left in the first half, the Colts' defence didn't allow another point.

And the old guys delivered the win.

"Hey, great win," coach Chuck Pagano shouted to Hasselbeck while he was standing at the podium. "Love you. I'm so glad you're a Colt."

NOTES: Vinatieri also made his 479th field goal, breaking a tie for fourth place with John Carney. ... Indy lost Inside linebacker Jerrell Freeman and cornerback Jalil Brown in the first half with groin injuries. Both will be evaluated Sunday night. ... Hurns had eight receptions in the first half, surpassing his previous career best in just two quarters. ... Three Jacksonville players did not finish the game — middle linebacker Paul Posluszny (sprained ankle), cornerback Aaron Colvin (shoulder) and safety James Sample (shoulder).