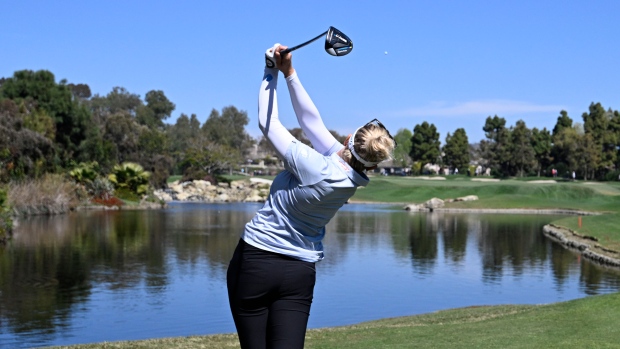 CARLSBAD, Calif. (AP) — Nanna Koerstz Madsen was tied for the lead in the JTBC Classic when she teed off Saturday on the par-4 18th. She two-putted for par and a 3-under 69 — and walked off with an unexpected three-stroke lead over Na Rin An.

Coming off a breakthrough victory two weeks ago in Thailand that made her the LPGA Tour’s first Danish champion, Koerstz Madsen took advantage of An's closing triple bogey to pull away at Aviara Golf Club.

“I do think it’ll be easier going into tomorrow with a lead than it was in Thailand,” Koerstz Madsen said. “You still have all excitement in your body that you got control tomorrow. ... Three can change over two holes. ... I still have to do my stuff, and then we’ll see what happens tomorrow.”

Maude-Aimee Leblanc of Sherbrooke, Que., racked up four birdies and two bogeys for a 2-under 70 round. The Canadian is four strokes back of Koerstz Madsen in a three-way tie for third.

An, the South Korean rookie who earned tour membership as the LPGA Q-Series medalist, eagled the short par-4 16th and birdied the par-5 17th to tie Koerstz Madsen for the lead.

But on the 18th, trying to hit off the cart path near the green, An fired the ball low into the path curb, sending it bounding down the path. She was able to hit her next shot off the path onto the edge of the green and made a 7 for a 69.

“It is what it is,” An said. “I was thinking of how best to finish the hole with the lowest score possible.”

Said Koerstz Madsen: “I've been there many times.”

Koerstz Madsen rebounded after a three-stroke meltdown of her own when she bogeyed the par-4 seventh and made a double bogey on the par-5 eighth. She steadied herself quickly, making a birdie on the par-4 ninth and par-5 10th.

“It does tell me that I’ve come a long way,” Koerstz Madsen said. “Normally, I probably would’ve freaked out after that 8. I was not happy with my double bogey on 8, but I knew there was a lot of chances out there.”

Koerstz Madsen had a 14-under 202 total in the final event before the first major of the season next week at Mission Hills in Rancho Mirage.

Top-ranked Jin Young Ko, playing alongside An, hit into the water on 18 en route to a bogey and a 70 that left her tied for third at 10 under with Pajaree Anannarukarn (69) and Leblanc.

“Today, was tough round for me,” Ko said. “I had a lot of chance for birdie. I missed a lot of putts today. The greens are really, really, really tricky. ... I’m trying to be patient on the course.”

Coming off a victory three weeks ago in Singapore, Ko extended her tour record for consecutive sub-par rounds to 33. She's won six of her last 10 tournaments.

Lydia Ko, the 2016 winner, had a 74 to drop seven shots back. She won the Gainbridge LPGA in January. Defending champion Inbee Park also was seven strokes behind after a 70.