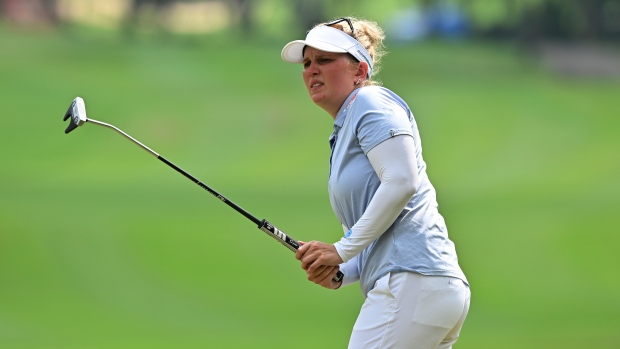 The 55th-ranked Dane's error-free 6-under 66 gave her a 54-hole total of 21-under 195 in humid conditions after lightning and rain disrupted play for 90 minutes in the afternoon at the Siam Country Club Pattaya Old Course.

“I didn’t make many mistakes. I hit a lot of greens," the 27-year-old Madsen said. "I would love to make a couple more putts but I’m happy with the round in overall.”

Lin Xiyu (66) of China and Celine Boutier (67) of France trail by one stroke.

Henderson of Smiths Falls, Ont., had seven birdies and one bogey.

Madsen is searching for her first LPGA title after two top five major finishes in 2021 — she tied for third in the ANA Inspiration and had a share of fifth in the Women’s British Open. Her best result on the LPGA was second at the 2019 Indy Women in Tech Championship.

“I don’t think I have been in the lead before. I have to be patient and make a lot of birdies,” she said. “It will be amazing if I win my first LPGA title. That’s what I play for.”

The 22nd-ranked Boutier, with six birdies against one bogey, is eyeing her third LPGA title following wins in the 2019 VIC Open in Australia and 2021 Shoplite LPGA Classic in New Jersey.

“My parents and my sister are here this week. They don’t have many chances to watch me play," said Boutier, who is of Thai heritage. “It’s very nice to have them support me and pray for me to have birdies. I hope to hit the fairways more in the final. That will help me play more aggressive on the approach shots.”

The 45th-ranked Lin, after securing just one birdie on the front, reeled off four straight birdies from holes 12-15 before adding one more on the 18th for her second straight 66.

“A lot of players are going to attack on the final day. As for me, I have to hit some fairways and when there’s s a chance, I have to go for it,” said Lin, who is also looking for her maiden victory.