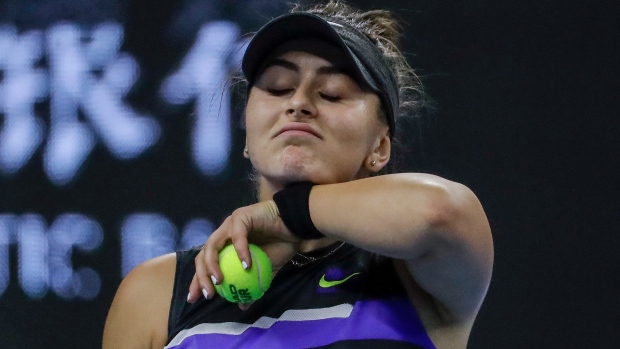 BEIJING — After a thrilling quarterfinal at the China Open, Bianca Andreescu and Naomi Osaka embraced at the net and exchanged compliments.

It could be the first of many similar moments between two of the top players in women's tennis.

Canada's Andreescu finally saw her WTA Tour season-high win streak of 17 matches come to an end with a 5-7, 6-3, 6-4 loss to Japan's Osaka on Friday.

"I just told her that she was an amazing player. She said 'same' and that we'll play again multiple times, which I hope doesn't happen," Osaka said with a chuckle when asked about her chat with Andreescu at the net after their first career meeting.

Osaka, ranked fourth in the world, fought back from a break down in both the second and third sets to end three streaks for the sixth-ranked Andreescu, a 19-year-old from Mississauga, Ont.

Along with the win run ending, Andreescu suffered her first loss in nine matches this season against a top-10 opponent and saw her streak of 13 consecutive wins in three-set matches halted.

"For me, it was really stressful," Osaka, 21, said of a match that lasted almost two hours 15 minutes.

"I'm glad it was entertaining for everyone. Playing against her for the first time was really special. I think that it kind of lived up to the hype."

Osaka, 21, had her 10th and final ace on her third match point to prevail.

The Andreescu-Osaka match featured the winners of the past three hard-court Grand Slams — the 19-year-old from Mississauga, Ont., won this year's U.S. Open, while Osaka won the 2019 Australian Open and the 2018 U.S. Open.

"For me I just kept telling myself to fight and I'll have the opportunities," Osaka said. "Thankfully, that's what happened."

Osaka will face No. 16 seed/defending champion Caroline Wozniacki of Denmark in the semifinals of the US$8.285 million China Open on Saturday.

The other semifinal of the WTA Premier-Mandatory event pits top-ranked Ash Barty of Australia against No. 8 seed Kiki Bertens of the Netherlands.

"From my opinion, that was one of the highest quality matches I played all year," said Barty, the French Open champion. "Petra always has a way of bringing out the best in me, she really does."

Barty converted three of her six break points while Kvitova, a two-time Wimbledon champion, was two for seven.

"I think this week I played some better tennis again," said Bertens, who amassed 36 winners to Svitolina's 16. "I think then with some pressure and playing better all the time, it's good for me. It says for myself that I was growing a lot over the last few years."

Andreescu's ranking could be fourth (which would be an all-time high for a Canadian woman), fifth or sixth next week, depending on how the tournament plays out.

On the men's side, Andy Murray's run at the China Open is over.

The former No. 1, who had won consecutive singles matches for the first time since undergoing hip surgery in January, lost to top-seeded Dominic Thiem 6-2, 7-6 (3) Friday in the quarterfinals.

Thiem broke the 32-year-old Murray in the first game of the match, but the British player made things more difficult in the second set, testing his younger opponent's nerve in finishing out the match.