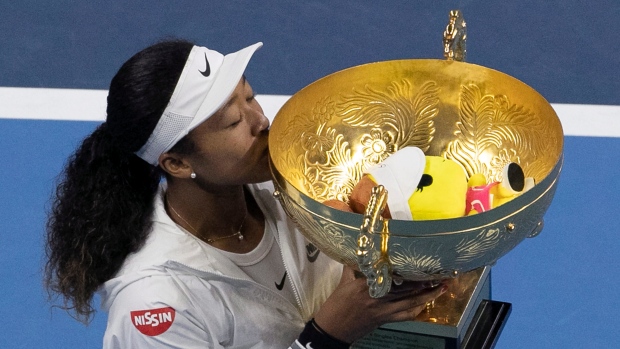 BEIJING — A surging Naomi Osaka found further redemption for a string of disappointing performances over the summer with her second consecutive title in Asia at the China Open on Sunday.

Osaka bounced back from a set down to top-seeded Ash Barty, cruising through the final two sets to defeat the top-seeded Australian 3-6, 6-3, 6-2 and accomplish her goal of returning to winning form on the tour's Asian leg.

Osaka's win follows the two-time Grand Slam winner's victory last month at the Toray Pan Pacific Open in her birthplace of Osaka, Japan, her first singles title since the Australian Open in January.

"Honestly, all I was thinking about was how much I wanted to win so that made me very emotional," Osaka said after the match. "In the second set I just tried to rationalize everything and then in the third set just continue what I was doing."

Japan's most dominant player came into the tour's swing through Asia determined to make a statement following what she has called an on-and-off year that included a string of dismal performances in Europe and America.

"For me, this was my goal. After I lost in the U.S. Open ... I really meditated on it. It just feels like I accomplished what I set out to do," Osaka said.

The mid-year "dip" in her performance "really humbled me, and it made me very motivated to be here right now," she said.

Osaka's shaky start on Sunday included a trio of double-faults midway through the first set that helped put the French Open champion in the driver's seat.

The second and third sets were an entirely different story, however, with Osaka bringing her service game under control and pounding her returns down the line. After breaking Barty in the seventh game, victory was all but assured, despite an attempted comeback by the Queensland native in match's final minutes.

Known as a big-hitter, fourth-seeded Osaka seemed to benefit particularly from the cool, dry nighttime conditions, with temperatures hovering around 15 Celsius (59 F). Barty said the "sterile" conditions nullified the zippiness of her slice and reduced the variety of shots she was able to deploy.

"I was trying to belt it and I couldn't crack an egg out there," said top-ranked Barty, who last month reached the semifinals of the Wuhan Open in central China.

"Little half-chances that I wasn't able to grab tonight, but I think all-in-all I think it was a solid performance and I'm just proud of the way we were able to fight and kind of grow through the week," she told reporters.

Osaka, who has described her game as instinctual, said she didn't know whether the conditions benefited her style of play, saying she paid little attention to such matters, an attitude that extends to her view of statistics and rankings.

"I'm not really too much of an analyst, so I can't say whether the colder conditions helped me," she said.

She also said she was grateful for the low-key presence of her stand-in coach, her father Leonard Francois, but said that arrangement wasn't permanent.

"He annoys me so much that it makes me angry and I use the anger as a tool to win," Osaka said. Watching her matches "stresses him out," she added. "I don't think it's a long term thing."

The victory evens the record between the pair to two-a-piece in their four meetings on tour.

Fifth-ranked Thiem recorded his fourth title in a season where the 26-year-old has defeated both Roger Federer and top-ranked Novak Djokovic.

He called the match against the third-seeded Tsitsipas one of the best of his career and said his early departure from the U.S. Open had left him "fresher than ever" for the later part of the season.