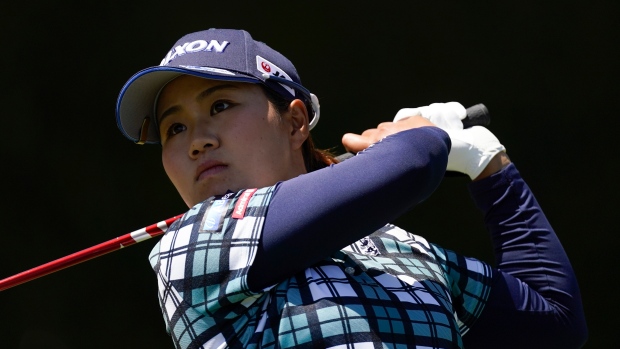 Tied for the lead with Hataoka after a birdie on the par-5 15th, the top-ranked Ko bogeyed the par-4 16th and made a quadruple-bogey 8 on the 17th after failing twice to get the ball out of the deep barranca.

Hataoka birdied the 16th and parred the final two holes for a 4-under 67 and 11-under 202 total at breezy Wilshire Country Club. The 23-year-old from Japan has five LPGA Tour victories, winning twice last season.

“During yesterday’s round something clicked inside me and I was able to bring that to today’s round, too,” Hataoka said. “I think that really helped me today.”

Hannah Green of Australia was second after a 69.

Maude-Aimee Leblanc of Sherbrooke, Que., is the lone Canadian who made the weekend cut. She shot a 69 Saturday and is tied for 41st at 1 over for the championship.

On the 16th, Ko's chip from in front of the green rolled back to her feet and she made a 20-footer to salvage bogey.

“This course is tough one, so I’m trying to focus on my game,” Ko said. “And I have one more round to go, so I will use the all energy from my body.”

Hatoaka had five birdies and a bogey Saturday in diminished wind.

Green had three birdies and a bogey playing in the final group with Hataoka and Ko.

“I feel like I haven’t played my entire best,” Green said. “I’m hoping tomorrow I can kind of get everything to go my way and try and put as much pressure on Nasa as possible.”

Park had four birdies and a bogey.

“This golf course, anything can happen,” Park said. “Especially, if you have a bad-putting day, it’s just a disaster on this golf course.”

The tournament is part of a two-week run in the Los Angeles area, with the Palos Verdes Championship next week.