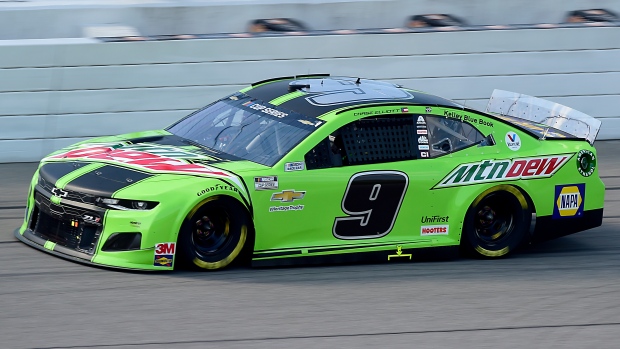 You don’t have to pay close attention to realize that Kevin Harvick is in the midst of an absolutely remarkable season.

All you have to do is look at the results.

As has been the case so often this year, he was even better than expected.

He extended his streak with back-to-back wins.

Harvick took the checkered flag in the FireKeepers Casino 400 on Saturday, and then doubled down in the Consumers Energy 400 on Sunday for his sixth win of the season.

In the process, he became the first driver to win consecutive races on consecutive days since Richard Petty back in 1971.

Ironically, Harvick will not be the betting favourite to win a Cup Series race this week for the first time since late June.

That’s because NASCAR is headed to Daytona for the first road course race of the season.

Here is a closer look at the betting odds for the Go Bowling 235.

Elliott has really struggled since cashing in the $1 million prize that he earned with a NASCAR All-Star Race win back on July 15th.

The driver of the No. 9 Chevrolet for Hendrick Motorsports hasn’t finished better than seventh in any of his last five starts since then.

However, Elliott’s road course record indicates there is a very good chance he will get back on track this weekend.

Elliott has won each of the last two Cup Series road course races.

Will Elliott join that list at Daytona this weekend?

At the very least, he should be in the mix among the legitimate contenders to win.

Truex Jr. is another driver with a strong reputation on road courses.

He also came very close to winning another last year at the Roval in Charlotte before Jimmie Johnson wrecked him on the final turn.

Overall, Truex has produced a 4.0 Average Finish Position in his last seven starts on road courses.

After four straight third-place finishes, Truex is another legitimate contender to consider for Daytona this weekend.

The defending Cup Series champion is still looking for his first Cup Series win of the season through 22 starts.

Still, Busch is comfortably ahead of the playoff cutoff and should race with some confidence following a pair of strong performances at Michigan.

The driver of the No. 18 Toyota for Joe Gibbs Racing has top-five finishes in four of his last six starts overall.

While it’s going to be difficult to trust him in outright markets until he finally breaks through, it makes sense that Busch features among the drivers with the shortest odds to win the Go Bowling 235.

It’s been 22 years since a driver ended a season with an Average Finish Position better than 6.0.

Kevin Harvick has produced an extraordinary 5.9 AFP through 22 starts.

He’s on pace to produce the best single-season AFP since Jeff Gordon recorded a 5.7 AFP in 1998.

While a trip to a road course makes this race a bit of a wild card, Harvick performed well at The Roval last year where he led the second most laps of any driver.

For as hot as Harvick is right now, he can’t win every race.

Still, at 7-to-1 odds the value is good enough that some will be tempted to roll the dice on Harvick to extend his win streak to three.

So it’s no surprise that Elliott, Truex and Busch have the shortest odds on the board this week.

However, that could work in favour of anybody that takes a chance on him this weekend.

Despite the lack of victories, Keselowski has posted the seventh-best AFP on road courses of any driver set to compete in Sunday’s race.

He is also one of three drivers with three or more wins this year, behind only Harvick (6) and Denny Hamlin (5).

The lack of outright victories on road courses is a big reason Keselowski is listed at +1000, even if he proved he could compete with the best on those tracks.

At the very least, Keselowski should be on the radar to contend for a top-five finish at decent value for the Go Bowling 235.

Sticking with the theme of value, the elder Busch brother stands out for a few reasons heading into the first road course race of the season.

First, Busch is one of a handful of drivers in the field with significant road course racing experience.

Second, he’s been fairly consistent on road courses with 11 top-10 results in his last 15 starts on this type of track.

Finally, 22-to-1 is pretty good odds for a driver that has the potential to surprise even if he is far from a lock to win.

Busch should definitely be a popular pick in alternate specials markets for Sunday’s race at Daytona.

*All Betting Information appears as listed by Bodog on Friday, Aug. 14, 2020.