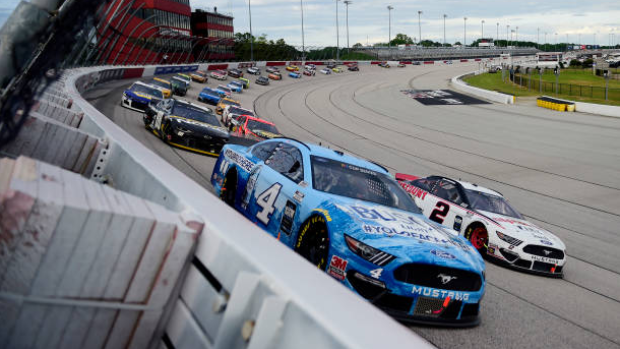 If the past two weeks are any indication, NASCAR fans could be in for a thrilling and unpredictable second half to the Cup Series season.

Ten days ago, rookie Cole Custer delivered the biggest surprise of the year so far when he won at Kentucky Speedway at 300-to-1 odds.

Seven days later, it was Austin Dillon’s turn to surprise with a victory at Texas Motor Speedway at 125-to-1.

Custer and Dillon joined the eight other drivers that have clinched a playoff berth with at least one victory this season.

Right now, that list doesn’t include the defending Cup Series champion Kyle Busch, who is still looking for his first win of the season with eight races to go.

Busch will get another opportunity to end his drought at Kansas Speedway on Thursday night - 7:30pm et/4:30pm pt (TSN1, TSN3, TSN Direct).

Will Busch take the checkered flag for the first time in 2020?

Or will we see another surprise long shot make it to Victory Lane?

Here is a closer look at the latest odds for the Super Start Batteries 400 Presented By O’Reilly Auto Parts.

After stops at Kentucky and Texas, the Cup Series heads to another 1.5-mile track in Kansas Speedway this week.

It will mark the first time in Cup Series history that three straight races will be held on a 1.5-mile track.

That’s good news for the current points leader, who has led 991 laps more than any other driver on 1.5-mile tracks over the last decade.

He’s also tied with Brad Keselowski for the most Cup Series wins at 1.5-mile courses over that span.

Harvick is in the midst of his most impressive stretch of the season with six straight top-five results, including wins at Pocono and Indianapolis.

He also has top-five finishes in four of his last eight starts at Kansas, including wins in both 2016 and 2018.

Eventually, the No. 4 Ford is going to run into some trouble.

However, his current hot streak and overall track history make Harvick an obvious pick as the consensus favourite to win at Kansas.

Elliott followed up his million-dollar performance in the NASCAR All-Star Race with a 12th-place finish at Texas on Sunday.

Despite the inconsistency, Elliott is still the second choice on the board thanks to his excellent numbers at Kansas Speedway in recent years.

Elliott won at this track in October of 2018.

Last season, he placed fourth in the May race here and then was the runner-up when the Cup Series returned to Kansas in October.

With a series-best 2.33 Average Finish Position in his last three Cup Series starts at this course, it’s understandable that Elliott would have such short odds.

However, the fact that the driver of the No. 9 Chevrolet has been so inconsistent of late makes it hard to back him at that price this week.

The defending Cup Series champ is still looking for his first win through 18 races this season.

While he’s registered eight top-five finishes, there are some obvious reasons for concern.

This season, Busch is still looking for his first win with just 150 laps led – his fewest through the first 18 races of a season since 2006.

If there is a silver lining, it’s that Busch has finished in the top-six in three of his last four starts if we include the NASCAR All-Star Race.

He’s also performed at a high level at Kansas with top-10 finishes in nine of his last 10 starts at this track, including a victory here in 2016 and seven top-five results over that span.

Perhaps this is the week that Busch finally does end his drought.

The one thing we do know for sure at this point is that he is starting to run out of time.

Truex also has a strong track record at Kansas.

He’s placed in the top-six in five of his last six starts at this track, including winning both Cup Series races here in 2017.

However, as is the case with Elliott, Truex has really struggled with consistency of late.

In fact, the veteran Joe Gibbs Racing driver has just one top-five finish in his last eight starts – he was the runner-up at Kentucky.

Even with his recent history at this course, it might not be worth it to back Truex at such short odds.

If you think we could see another surprise at Kansas on Thursday night, then Busch might be worth taking a look at as a sleeper pick.

The veteran driver for Chip Ganassi Racing has placed in the top-10 in seven of his last 10 starts at this course, including a runner-up here in 2017 and a fourth-place finish at this track last year.

After hitting a bit of a rough patch, Busch has flashed his potential of late with a fifth-place finish at Kentucky and another top-10 at Texas this past Sunday.

At the very least, Busch will be worth a look to finish in the top-10 again at Kansas.

As for picking him to win this race outright, well, we have certainly seen much stranger outcomes in the Cup Series of late.

Jones finds himself 24 points out of a playoff spot with eight races to go.

Last week, I wrote that Jones was a good bet to finish in the top-10 – he placed sixth.

This week, Jones should be a good option to bet on to place in the top-10 once again.

After all, he’s finished seventh or better in each of his last four Cup Series starts at Kansas.

While he might be a long shot to win outright, it isn’t unrealistic to expect another top-10 from Jones in Thursday’s Super Start Batteries 400 Presented By O’Reilly Auto Parts.

*All Betting Information appears as listed by Bodog on Wednesday, July 22, 2020.