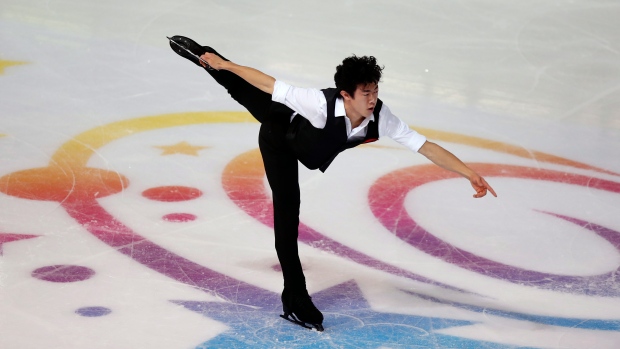 "Overall, it was a good start for my senior competitions," Kostornaia said.

Mariah Bell was third on 70.25, one place ahead of fellow American Starr Andrews.

The fight for the lead pits Zagitova, who is still only 17, against Kostornaia, 16, among Russian skaters with strong jumping skills who have moved up from juniors this season.

An under rotation from Zagitova on her triple lutz-triple loop combination and a deduction for a time violation left her behind Kostornaia going into Saturday's free skate.

Chen, the two-time reigning men's world champion, landed two quadruple jumps and scored 102.48 points to lead but put both hands down on his triple axel.

"Work has to be done, but it's exciting to be in this position," he said.

The American leads the French round of the series by four points after what he called a "shaky" program. Alexander Samarin of Russia, who landed a high-scoring quad lutz but had errors on other elements, was second.

Kevin Aymoz of France was third with 82.50, while Shoma Uno of Japan was fourth with 79.05 after falling on his quad toeloop and triple axel.

After his win at Skate America last month, Chen is on course to qualify for next month's finals in Italy.

World junior champion Tomoki Hiwatashi of the U.S. placed just 10th in his first senior Grand Prix skate after pulling out of a triple axel.

French ice dancers Gabriella Papadakis and Guillaume Cizeron beat their own record score for the rhythm dance with 88.69, taking an eight-point lead over Americans Madison Chock and Evan Bates.

Charlene Guignard and Marco Fabbri were third for Italy.

Russia is on track for a second victory on Saturday after Daria Pavliuchenko and Denis Khodykin led the pairs short program with 76.59.

Nearly three points back in second place was the other Russian pair of Anastasia Mishina and Alexander Galliamov, the world junior champions, with Haven Denney and Brandon Frazier third.