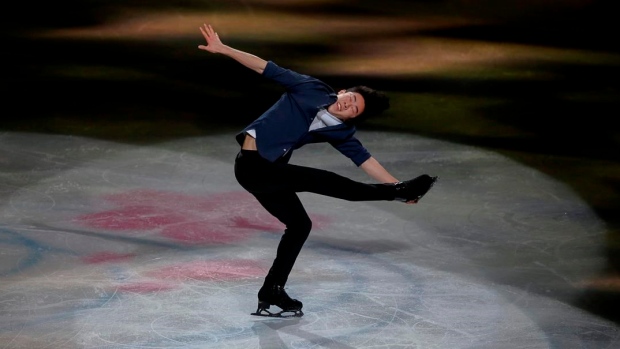 GREENSBORO, N.C. — Coming off illness and spending much of his days as a full-time college student, Nathan Chen shouldn't have been capable of setting a personal best Saturday at the U.S. Figure Skating Championships.

Then again, maybe it's wise to expect only greatness from the three-time defending champion and winner of the last two world championships.

Chen, who hasn't lost an event since he struggled in the 2018 Olympics short program, soared far above the ice — and the competition — to win the short at nationals. His margin is so massive, 114.13 points to 100.99 for second-place Jason Brown, that Chen probably could power skate through Sunday's free program and still win.

“It was one of my best," the always understated Chen said, “really calm and paced. I felt in control of everything I was doing in the program."

That's how it tends to go for Chen, who is on target to become the first man to win four consecutive U.S. titles since Brian Boitano in 1988. Not even flu-like symptoms that curtailed his training earlier this month, nor the heavy class load at Yale, nor being separated by a continent from his coach, Rafael Arutunian, slows him.

In pairs, Aleza and Chris Knierim won their third U.S. crown even though they finished second in the free skate to Jessica Calalang and Brian Johnson. Ice dance went to Madison Chock and Evan Bates.

Chen set the U.S. championships high in last year's short program at 113.42. His free skate and overall totals from 2019 clearly are in reach. It sometimes seems even the ceiling of the arena is within reach as he takes off on quads or triple axels.

“It's the way Raf teaches us,” Chen said of being on his own in Connecticut, with Arutunian in California. “When we're young he wants us to be productive and learn to be self-sufficient as kids. By the time we're at this level, we still need him and he is a great guiding force ... but we know what we've got to get done that day and how to fix things on your own."

It didn't look like Chen had much that needs fixing in his program to “La Boheme.” It was graceful, lyrical, almost relaxing to watch, but also as difficult as any men's short routine gets. He nailed a quad flip, quad toe loop-triple toe loop combination and a triple axel.

Brown, the 2015 national champ who won team bronze at the 2014 Sochi Games, has massively improved his technical skills since moving to Canada to train with renowned coach Brian Orser. Slowed by a concussion and what he calls “struggles" over the last year, the highly entertaining Brown has begun mastering the more difficult jumps.

“The rockiness I dealt with definitely made me stronger," Brown said.

He credits training with "the best skaters in the world" who work with Orser, including two-time Olympic gold medallist Yuzuru Hanyu of Japan, as being “uplifting and inspiring."

The husband-wife Knierims, team bronze medallists at the 2018 Olympics, also won nationals in 2015 here in Greensboro, and in 2018. But they struggled mightily last season and wound up seventh after coaching changes.

“Redemption always feels good," she said. “It was hard last year to come so low but we worked really hard. We're just elated to reclaim our title again and hope this pushes us forward."

But the stars of the evening were Calalang and Johnson in just their second year together. They leaped from fifth in last year's nationals with a technically difficult yet gentle looking program that was clean, smooth and, at times, majestic. Their triple twist to start proceedings was almost stratospheric, and their lifts were complex.

Their U.S. record 146.01 points in the free skate beat the Knierims by nearly seven points. But the Knierims entered with a large enough cushion after winning the short program, in which Calalang and Johnson were fourth.

“I don't think either of us have had that kind of performance," Calalang said.

Recalling the lengthy standing ovation it drew, Johnson added: “The amount of audience support I felt at that end of the program was overwhelming. It was the most amazing thing I've felt on the ice."

The United States has two teams for pairs at the world championships in March in Montreal and those couples figure to get the nod.

Chock and Bates, who also won in 2015 in Greensboro, took the ice dance by adding the free dance victory to their top standing in the rhythm dance. The exotic and intricate routine placed them ahead of training partners Madison Hubbell and Zach Donohue, who earned the last two ice dance championships.

“It was a very special time," Chock said of the program, which helped them to second place at the Grand Prix Final. “We were really having so much fun ... really enjoyed the dance and thought the audience was really into it.''

Third were Kaitlin Hawayek and Jean-Luc Baker. All three duos are expected to fill the Americans' berths at worlds.