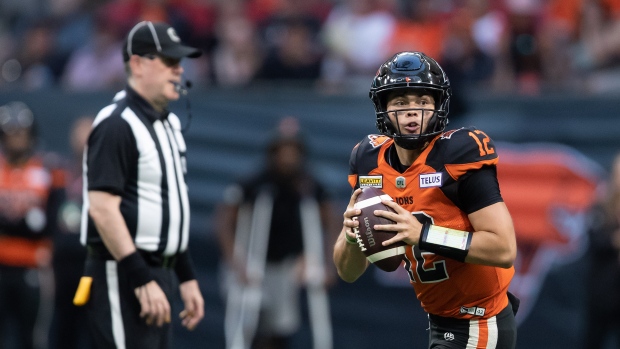 VANCOUVER — Nathan Rourke threw for an eye-popping 477 yards Saturday, leading the B.C. Lions to a 46-14 dismantling of the Edmonton Elks.

Michael O'Connor came in under centre for the Lions (6-1) late in the fourth quarter but did not record a single throw as B.C. opted to rush to close out the game.

Edmonton (2-6) slotted Taylor Cornelius back in at QB after Tre Ford was added to the six-game injured list Friday, but once again struggled against a B.C. side that took a 59-15 win in Week 1 action.

Cornelius threw for 183 yards on Saturday, connecting on 15 of 26 attempts with one touchdown pass and an interception. He was sacked five times.

Maleek Irons added a rushing major for the Elks, who were coming off a bye week.

Both sides stuttered to start the game, with the Elks turning the ball over on their first two possessions.

The Lions capitalized on the second error. Rourke connected with Dominique Rhymes on a two-yard touchdown pass, capping a six-play, 49-yard scoring drive that put B.C. up 7-0 midway through the first quarter.

Edmonton responded, steadily working its way down the field before Cornelius escaped the pocket and fired a 19-yard bullet to Kenny Lawler in the end zone. The seven-play, 69-yard drive marked the Elks' only points of the first half.

B.C. was far from through.

The Lions started their next possession with a 49-yard pass from Rourke to Lucky Whitehead, who sprinted into Edmonton territory. The young QB followed up with a 16-yard toss to Keon Hatcher, then tacked on a 14-yard run. Before the end of the opening frame, he sailed another ball to Rhymes for a major.

The pair connected once again midway through the second when Rhymes, under pressure, leapt up to reel in a 15-yard toss for his third TD of the game, a play that boosted B.C.'s cushion to 20-7.

B.C. then scored on its fifth straight possession when Whyte hit a 47-yard field goal.

Rourke ended the half with yet another TD, finding Bryan Burnham along the sideline in the end zone with six seconds left in the half. The veteran receiver made sure to get a foot down for the major.

Saturday's game marked Burnham's return to the lineup after suffering broken ribs and a collapsed lung in a crushing hit by Toronto Argonauts defensive back Shaq Richardson on June 25.

Rourke finished the first half with 386 passing yards and five touchdown passes and B.C. went into the locker room up 37-7.

The club still had more to give.

Early in the third, Lions defensive lineman Mathieu Betts sacked Cornelius for the second time in the game. Edmonton recorded a four-yard loss and B.C. added two points for a safety.

Rourke showed he has more than just a good arm midway through the frame. Seeing a hole, the 24-year-old Canadian sprinted seven yards and shook off a hit by Duron Carter to add a seven-yard rushing TD to pad his score line.

The Elks appeared poised to end the scoring drought before the close of the quarter but Sione Teuhema spoiled the party with a sack. It was the fifth time the Lions took down Cornelius on the night.

Irons finally chalked up some points for the visitors early in the fourth, sprinting six yards into the end zone. The touchdown cut Edmonton's deficit to 46-14.

The Lions will be back in action next Saturday when they take on the Stampeders in Calgary. The Elks will host the Saskatchewan Roughriders later that night.

FOOTNOTES: Rourke broke his own record for passing yards by a Canadian quarterback in a single game. He hit the historic mark earlier this season. … Burnham hauled in six catches for 82 yards and moved into fourth spot on the Lions' all-time receiving yards list. … Elks kicker Ryan Meskell made his CFL debut. … B.C. lineback Ben Hladik recorded his first career interception late in the fourth quarter.

This report by The Canadian Press was first published Aug. 6, 2022.