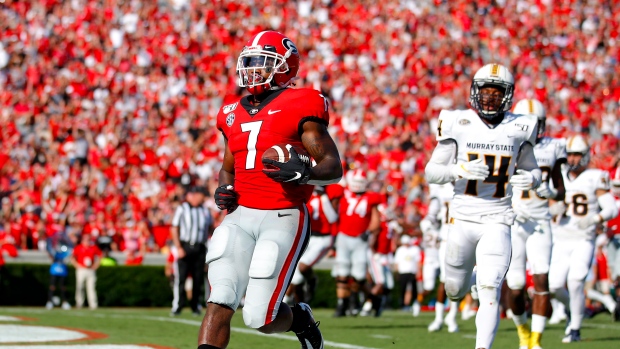 You would forgive the No. 3 Georgia Bulldogs if the SEC powerhouse was thinking beyond Saturday’s game against a 33-point underdog.

If Kirby Smart’s team wants to return to the College Football Playoffs for the second time in three years, they’re going to have to beat title hopefuls No. 7 Notre Dame in a week’s time in one of the premier clashes of the NCAA season. But first, there is the matter of Arkansas State and the Bulldogs are smart enough not to look past them.

You can catch Arkansas State vs. No. 3 Georgia LIVE on Saturday at 12pm et/9am pt on TSN3/5, on TSN Direct and streaming on TSN.ca.

“This is a really, really good football team,” Smart said of Arkansas State in his weekly press conference. “They do a tremendous job offensively and defensively, and you could see that last night right when we flipped the page to look at them. They've got some really good defensive players — explosive, quick.

The Bulldogs head into Saturday’s game 2-0 after a pair of dominant wins over Vanderbilt and Murray State, scoring a combined 93 points through the two games. While Georgia still has Heisman-contending quarterback Jake Fromm at their disposal, it’s been the ground game that’s powered the offence. The Bulldogs have rushed for 592 yards through the first two games of the season, good for 10th in the FBS.

Leading the way is junior D’Andre Swift, who has 214 yards rushing and two touchdowns this season on 22 carries. Swift rushed for a team-leading 1,049 yards last season and is expected to be the first running back off the board at the 2020 NFL Draft, but Smart is even more impressed with how the 21-year-old carries himself as a team leader.

“I think he understands that he's one of the inspirational players on the team; he inspires others to do more by the way he competes on the field, the way he runs the ball, the energy he attacks practice with,” Smart said of Swift. “He tries to set a good example for the young players. When [freshman wide reciever] George [Pickens] has a bonehead penalty, Swift was one of the first guys to visit with him and talk to him about it because he knows he can help him with that and he knows George is going to be a good player so here's an opportunity for him to impart some of his wisdom and knowledge on George, and I think Swift does that really well."

It would be one thing to be able to contain Swift, but even if the Red Wolves were able, they would still have to contend with freshman Zamir White (123 yards through two games) and senior Brian Herrien (96 yards).

Receiver Tyler Simmons says it’s his teammates’ commitment to grunt work that is allowing for a multifacted offence to fluorish.

“We let [players] know as soon as they walk in the door, if you want to play, this is not just an Air Raid offence,” Simmons told Jed May of the Macon Telegraph. “We run the ball too, and that requires us to block. For those short runs to become long runs downfield, we’ve got to block those safeties, block those corners.”

On the other sidelines are the 1-1 Red Wolves, who are taking to the field this season with heavy hearts. Head coach Blake Anderson will coach the team for the first time this season, returning from a leave of absence following the death of his wife this past August from breast cancer.

"I can't even begin to fathom or understand what he's gone through,” Smart said of his counterpart. “When I first heard the news, I was crushed for him, his family, his kids. I can never imagine what he's having to go through because that's really tough. Obviously, he loves family because he made the choice to step away and was able to go be with them and now, he's come back. I've met Blake a couple times and I've got a lot of respect for him as a person and a coach. I can't imagine what he's had to go through as far as his family, all his family, his kids and everything."

And while the Red Wolves might be the opposition on Saturday, Bulldogs fans haven’t forgotten about Anderson and his family. Some Georgia fans have launched a “Wear Pink for Wendy” movement, encouraging those attending the game to wear pink in memory of Anderson’s late wife.

“When I got the message yesterday, somebody sent it to me, I’ll be honest, I was overwhelmed with it,” Anderson said. “It brought me to tears yesterday. I can’t tell you — I just know right now everything’s really raw and it’s very fresh and just the show of support has been overwhelming at times.”

Anderson, in his fifth season at the helm of the team, acknowledges how overwhelming and new the grieving process has been, and how genuinely touched his is by the Georgia fans’ gesture.

“We’re doing everything for the first time, “ Anderson said. “Me and my kids are doing everything for the first time without her that we’ve been doing for so long ... I’m so grateful for the show of the support from the fans and whoever came up with the idea and it will be one of those things that we’ll just kind of have to see how we react. But I’m appreciative. I do, think it’s a really cool, really classy gesture by somebody that really didn’t have anything to gain from it.”

OTHER NCAA ACTION ON TSN THIS WEEKEND