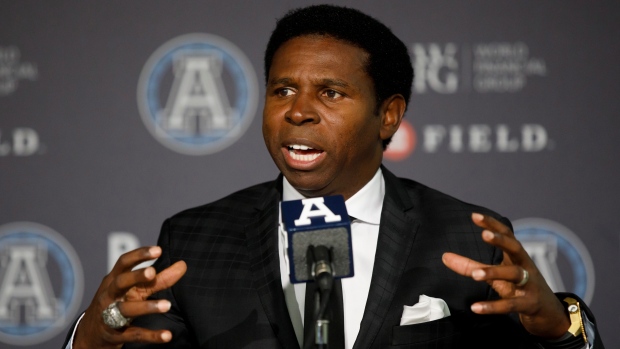 No one has been more closely associated with the Toronto Argonauts over the past 30 years than Michael ‘Pinball’ Clemons.

He was a star player, a Grey Cup-winning head coach and, for a short time, team president.

Now, a decade removed from last working in the CFL, he’s giving the general manager role a whirl, trying to right the ship for a team that has won just six games since an unlikely Grey Cup victory after a 9-9 regular season in 2017.

Though his team’s popularity may never have been lower, Clemons remains as recognizable a face as there is in Toronto – someone who is respected and highly thought of among sports fans and beyond. So it’s no real surprise a team that enjoys so little currency with the public would turn once again to someone who has a lot.

How that translates into winning more games or filling more seats, however, remain critical questions.

Clemons’ time away from football is extremely unusual. Most general managers are neck-deep in their sport when they ascend to the role. Clemons has never held a full-time scouting or player recruitment job, so this would seem to be, on the surface, a significant challenge.

That’s why the Argos are teaming him with John Murphy, a player personnel grinder who worked for Winnipeg, Calgary and Saskatchewan before joining Toronto last off-season.

Murphy is a bull-in-a-china-shop type who is a sharp contrast to Clemons in almost every way. He doesn’t lack experience when it comes to finding players and negotiating contracts, although he hasn’t held this much authority since he worked with former Blue Bomber head coach Mike Kelly in Winnipeg back in 2009.

Within the CFL, Murphy has his supporters and his detractors.

In the best-case scenario, the arranged marriage of Clemons and Murphy could fall into the so-crazy-it-just-might-work category. Or at least that’s what the Argos have to hope for, or it could be another difficult few years ahead.

Tuesday’s moves also marked the end of the Jim Popp era in Toronto, with a regular-season record of 15-34, two head coaches, a Grey Cup win and two seasons out of the playoffs.

Popp’s Argo legacy will be remembered for the 2017 Grey Cup win and  for acquiring quarterback James Franklin in a trade with Edmonton a few months later, just a few weeks before he would have become the hottest free agent on the free-agent market.

The move was hailed as brilliant at the time, since Franklin was widely considered to have all the makings of a future CFL star during limited duty in three years as a backup with the Eskimos. But he struggled in both seasons in Toronto, replaced in each by McLeod Bethel-Thompson, who put up better stats but couldn’t produce many wins.

The changes in Toronto have brought out more than a few skeptics around the CFL. For the sake of the franchise and the good of the CFL, Maple Leaf Sports and Entertainment has to hope they’re wrong.

Clemons didn’t want to discuss any specific matters of importance at his introduction this week, but there are two at the top of the list:

Head coach - Corey Chamblin’s first season as Argo coach has been characterized by some suspect in-game decision making and a defence that lacks much game-changing impact. Although Chamblin has two years remaining on his contract, there’s reason to believe the Argos may wish to go in a different direction. There is already buzz that former Argo Mike O’Shea, who played with and for Clemons, could move back to his home province at the end of this season – speculation fuelled by the fact that the Bombers head coach doesn’t have a contract next season in Winnipeg. But it’s also possible the Argos next head coach could be Clemons, in a role he held twice previously. Clemons could coach and retain the GM title while Murphy runs the front office. It would give the Argos some identity, put Clemons’ face in front of the cameras, and put him back in a role where he’s had success and can put his motivational tools to best use. Don’t bet against it.

Quarterback - Last weekend, Popp worked out a contract extension with Zach Collaros that was never approved before he was fired. A few days later, Collaros was traded to Winnipeg. That apparently doesn’t mean his Argos days are over, as Clemons professed a desire for him to return to Toronto via free agency this winter. It’s an idea that might appeal to the quarterback, who just bought a home in the GTA with his Canadian wife. But that’s a risky proposition at best, given Collaros’ history with injuries and so-so play since his best days in Hamilton. Beyond that, the Argos are expected to let Franklin and Bethel-Thompson walk when their contracts expire at the end of this season. That means they’re going to have to acquire quarterbacks via trade or free agency this winter. A lot of names could be in play, including Jeremiah Masoli and Nick Arbuckle at the top of the list. After two seasons of subpar play at the game’s most important position, Toronto needs to get this right.

Collaros is now with his fourth team in less than 24 months, having moved via trade from Hamilton to Saskatchewan to Toronto and now to Winnipeg. All the while he has struggled to find his footing and the form that once made him the CFL’s highest-paid player.

He’s expected to be cleared to return to the active roster by Winnipeg as soon as next week. Where things go from there will depend on how much Chris Streveler struggles in the Bombers’ remaining three games.

Streveler’s struggles aside, the Blue Bombers were playing with fire having no experience behind their starting quarterback the rest of the way. At least they’re not in that boat any longer.

The point must be made that the CFL plays an 18-game schedule, plus two preseason games, while the XFL will play no preseason games and have a 10-game regular season. So the XFL comes out ahead when the average salaries are worked out on a per-game basis.

Quarterback Nathan Rourke of the University of Ohio Bobcats is the most accomplished NCAA passer from Canada since Jesse Palmer.

While Rourke, a senior from Oakville, Ont., isn’t likely to be as highly recruited by NFL scouts as Palmer was when he became a fourth-round pick of the New York Giants in 2001 out of the University of Florida, he’s at least on the radar of NFL scouts.

Turning that into a true opportunity in the NFL will be difficult, given the conference in which he plays and the fact that Ohio’s style of offence often requires him to use his running ability to sustain drives.

Coming off consecutive nine-win seasons that ended in bowl victories under Rourke, Ohio is 2-3 so far this year after scrapping out an overtime win over the University of Buffalo last week. Rourke was good on 12-of-19 passes for 155 yards and an interception in the game.

Most see him as a player whose NFL high side coming out of college will be as free agent or mini-camp invitee, depending on how the rest of the season plays out.

But he will absolutely get more than his share of attention from CFL teams, who are already intrigued with his leadership, physical skills, presence on the field and athleticism.

It doesn’t hurt that, for the first time next spring, there will be an incentive for CFL teams to recruit Canadian quarterbacks, based on them counting towards the quota when they’re on the field.​