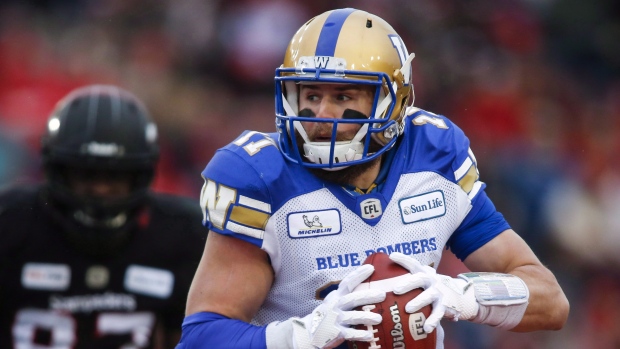 Since he debuted as the first rookie quarterback to start a season-opening game in more than 20 years last season, Winnipeg’s Chris Streveler has been one of the most intriguing players in the Canadian Football League.

A freak athlete, Streveler had begun his college career playing receiver at the University of Minnesota before transferring to South Dakota for his final two college seasons and being named a runner-up for the Walter Payton Award as the top player at the FBS level of NCAA football. (An award won by, among others, Dave Dickenson and Tony Romo.)

From the outset of his first training camp with Winnipeg, he appeared poised and confident, never looking overwhelmed at what was put before him. So there was no doubt to whom the Bombers would turn to when Nichols suffered a knee injury at training camp last season, forcing him to miss the season’s first three games.

In three starts, Streveler completed nearly 63 per cent of his passes, throwing six touchdown passes and rushing for two more while displaying his unique set of physical skills and carrying the ball 22 times for 193 yards.

And thus began the debate around the CFL about Streveler’s potential and just how ready he might be starting at quarterback.

Though Nichols returned four weeks into the season and remained healthy throughout, Blue Bombers offensive co-ordinator Paul LaPolice found ways to insert Streveler into games, whether gutting out tough yards with his legs or forcing teams to defend his ability to throw the ball as well.

But the question has always been, could Streveler handle being a starter week-in and week-out, throwing the ball 25 times a game and demonstrate the ability to rally his team from behind? Well, we’re about to find out, as the Bombers will turn to Streveler for at least the next four to six weeks while Nichols nurses an injury to his throwing arm.

While the Bombers have plenty on the line as they hope to maintain their spot atop the CFL’s West Division, there is lots on the line for Streveler as well.

As a pending free agent at the end of this season, Streveler has been under the watchful eye of teams across the CFL, especially those that might be in the market for a quarterback this coming off-season. By the time this season is over, every team in the CFL – including the Blue Bombers – will have a very good idea of what Streveler is and what he isn’t.

It’s already been assumed that Winnipeg won’t be able to keep both Streveler and Nichols beyond this season, as both players are on expiring contracts. It's been assumed that means parting with Streveler, as Nichols has been playing the best football of his life this season, throwing the ball efficiently while finding a touch for deep throws that has given the Blue Bombers' offence an added dimension this season. But is it possible that Streveler, who at age 24 is eight years younger than Nichols, could play well enough to make the Bombers think hard about which quarterback they should be hitching their wagon to?

That would seem like a stretch, but let’s just say it would be a very good problem for Winnipeg to be facing this off-season. At the very least, Streveler has a chance to end the debate over whether he’s ready to be a starting quarterback in 2020 and boost his value on the open market this off-season.

Meanwhile, in other Blue Bombers news, the hunt for a third-string quarterback continues. The fact is there just aren’t a lot of options out there for quarterbacks with recent CFL experience who could step-in and provide some depth. Brandon Bridge and Jeff Matthews were both in the league earlier this season but the most likely candidate may be Drew Willy, who was traded out of town to make room for Nichols in 2016. Willy played four games last season with Montreal, in a year beset by injuries. But with nearly 10,000 yards passing in his seven-year CFL career, he might be a preferable backup to Streveler over current No. 2 Sean McGuire, who has never thrown a pass in a CFL regular season game.

David Braley is finally ready to sell the B.C. Lions.

This is according to Lions president Rick Lelacheur, who revealed this week on TSN Radio 1040 Vancouver that the process of exploring potential buyers for the Lions has been underway since January.

Where it sits right now and what the timeline is for a sale, Lelacheur won’t say. But the fact he’s managed to get some of the interested parties an audience with commissioner Randy Ambrosie suggests we’re well down the path on this route.

All of which should be welcome news to everyone around the CFL.

Braley has long been recognized as an owner who has helped stabilize the CFL, going so far as to take a silent share in the Toronto Argonauts when the league was trying to convince Howard Sokolowski and David Cynamon to buy the team out of bankruptcy in 2003.

And his love for the league knows no bounds.

But as someone who openly suggests the league should go back to having television blackouts, Braley has never been considered a visionary in the modern age of sports entertainment. And it’s been clear for a while that the Lions have needed a refresh in the Vancouver market, a point driven home when they failed to draw 20,000 fans for their season-opener and the debut of new quarterback Mike Reilly.

Back to the future in Ottawa

Everyone knew this would be a season of adjustment for the Ottawa Redblacks, who bid farewell to their starting quarterback, a primary receiver, left tackle, starting running back and offensive co-ordinator this past off-season.

On the coaching front, Ottawa opted to go with an offence by committee approach with receivers coach, Winston October, calling the plays. That seemed to work well early in the season, but with the Redblacks just 1-6 in their past seven games, something had to change.

Which brings us to Joe Paopao, the former CFL quarterback who has been a lifer as a coach in this country, working at both the CFL and university levels. This also includes a four-year stint as head coach of the Ottawa Renegades from 2002-05, during which the team never made the playoffs.

The hope is that having a former quarterback on the headset can improve things.

Montreal Alouettes receiver DeVier Posey had a spectacular game Saturday against the Calgary Stampeders, hauling in 10 passes for 181 yards.

But that was nothing compared to the action that followed after he returned Sunday, the same day his wife, Kierra, was due to deliver their child.

Upon his return, Kierra told DeVier she believed it might be time for the delivery, and went to see the doctor, before being sent back home.

It was his best catch of the weekend.

After an off-season contract dispute, Wilder showed up in 2018 happy and highly motivated to continue the success he’d established the previous year. Unfortunately, it hasn’t worked out that way. In fact, Wilder has fewer yards along the ground since the start of the 2018 season than he did during that half-season as the feature back in 2017.

Not all of that is on him, as Toronto has made a consistent habit of falling behind during the first halves of games both this season and last, forcing the Argos to abandon the run-game and play catch-up.

However, a rib injury suffered last month, combined with missing two practices because he was late coming back from the bye week appears to have been enough for him to lose his starting job to Brandon Burks.

The Argos practised Wilder on special teams last week but scratched him, according to the team, when he said he didn’t feel ready to play.

Since the Argos use Chris Rainey as a returner and running back, they don’t need Wilder on the roster as a third running back. So getting on the game-day roster may require a return to the role in which he began his CFL career in 2017. ​