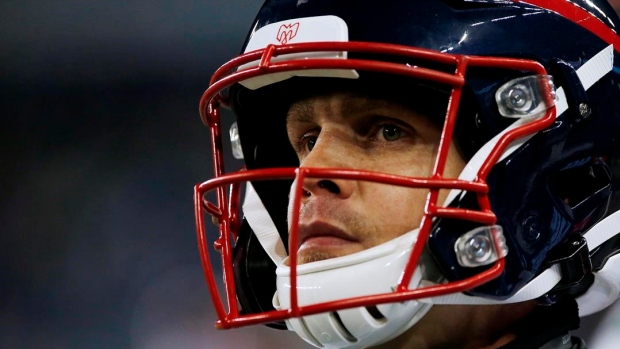 Even by the sometimes-unpredictable standards of the Canadian Football League, Trevor Harris has had quite a season.

He’s gone from franchise quarterback in Edmonton to rental quarterback in Montreal, carrying the Als’ hopes on his shoulders as they face Hamilton Sunday in one of two division semifinals.

The Tiger-Cats are used to seeing Harris at playoff time. This is the third consecutive season they’ve come up against him in a postseason game. Curiously, Harris has played for a different team in each of those matchups.

Now, a little more than 24 months later, here he is back at Tim Hortons Field with the Alouettes.

A quarterback facing the same team in the playoffs three years in a row, each time with a different team, might be a CFL first. The unique situation speaks to the sharp turns in Harris’ career over that period, beginning with his exit via free agency from Ottawa to Edmonton.

Harris was entrenched as Edmonton’s franchise quarterback at the beginning of this season, with no sign that his tenure there was in danger. However, things turned sour quickly. Mere weeks after throwing for nearly 400 yards and four touchdowns in a game on Labour Day, he lost his job to an unproven and raw rookie in Taylor Cornelius.

The Elks managed to win just a single game the rest of the season, while Harris was shipped to Montreal in a move that seemed mostly about getting him and his salary out of town.

Montreal general manager Danny Maciocia wanted Harris simply as an insurance policy after Vernon Adams suffered a season-ending injury, leaving the Als with Matthew Shiltz as their only experienced quarterback.

Shiltz played well until he was injured but having Harris on the roster as the league’s most overqualified backup has saved Montreal’s season.

For Harris, this opportunity is a chance to prove he is still worthy of being a starting quarterback after Edmonton said his demotion and subsequent trade were strictly football decisions.

During his short time in Montreal, he’s outplayed his replacement in Edmonton, and given Montreal the presence of a veteran quarterback who’s been able to pick things up quickly. He’s thrown eight touchdown passes against just two interceptions while still learning the offence.

How might his performance Sunday impact the 35-year-old veteran pivot’s future?

Harris has two years remaining on a contract that makes him one of the highest-paid players in the CFL at more than $500,000 per season. It’s unlikely any team would want him at that price for next season.

But like every off-season, there are going to be teams making evaluations and decisions at the quarterback position. A strong playoff performance or two would solidify Harris’ place in that mix.

And playoff performances have always been Harris’s strength. In his past five postseason games he’s averaged more than 370 yards passing

It’s not even out of the question that the guy who created the quarterback problem in Ottawa by leaving might help solve it by going back.

Or, if Harris somehow leads Montreal to a Grey Cup win, does his label as rental get a re-evaluation? Stranger things have happened.

Harris said when he arrived in Montreal that he was still at the top of his game. He’s got the opportunity to try and prove that this weekend.

It was not a complete shock on Monday when the Edmonton Elks announced the dismissal of team president Chris Presson, general manager Brock Sunderland and head coach Jaime Elizondo.

The Elks board clearly wanted a clean slate and the chance to remake the team’s relationship with a completely new cast.

The question is, how did it come to that?

Presson was dealt an incredibly difficult hand, taking the job in 2019 after working as president of the Arizona Rattlers in the Indoor Football League, and then having to steer the team through the pandemic in a market where he had no previous experience.

Hiring a team president with no background in Alberta, or Canada for that matter, seemed like an odd decision at the time.

And though Presson appears to have been respected by his peers internally and around the league, he may simply have had the wrong background for the job.

Sunderland took over the team before the 2017 season, winning 12, nine, eight and three games in his four seasons, the most recent one coming in a 14-game schedule.

He was aggressive when it came to free agency and making trades, and his rosters always seemed better on paper than their record. He had his chance to try and improve that with a head coaching change (the Elks hired Scott Milanovich after the 2019 season, who took a job in the NFL when the CFL didn’t play in 2020). When that didn’t work, the board got rid of both Sunderland and Elizondo.

Sunderland had recruited Harris as the replacement for Mike Reilly after the 2018 season, a move that allowed the team a fairly smooth transition from one franchise quarterback to another. Trading Harris without a proven replacement was a risky move, and one that didn’t make the team better.

Elizondo was a successful assistant with several teams and coached under Marc Trestman in the XFL. The fact that he had worked with Harris in Ottawa should have been a huge plus for the Elks. In the end, it wasn’t, and he paid the price for a season everyone would like to forget.

Two other factors can’t be ignored as well in this chapter.

One is the team’s August COVID-19 outbreak, which highlighted an environment in which many players didn’t appear to be taking preventative measures seriously. One player even lied his way to circulating among vaccinated teammates.

Fair or not, the team’s upper brass wore some of that.

And then there is the matter of the team’s former trainer, Dwayne Mandrusiak, who was terminated by the team during 2020 after 49 seasons.

The reason for Mandrusiak’s dismissal has never been made clear. But the emotional reaction to his dismissal from alumni and long-time fans never went away.

Every player who’s ever worn the green and gold appears to have shared some kind of friendship or bond with Mandrusiak. Firing him without explanation put the administration in the role of villain.

In the end, it became a situation the Elks board simply wanted to leave completely behind – on and off the field.

Also, during the Elks news conference…

Elks board chair Ian Murray had a lot to say on Monday.

Especially about what appears to be a true crisis over the team’s falling position in the community at the same time as the NHL’s Oilers show signs of reaching their potential.

Murray talked about fan attrition going back a decade, calling its fan demographics “brutal,” made up mostly of those old, white, and male.

Murray later clarified his comments, so as not to sound unappreciative of the team’s current and long-time fans.

Bu the issue Murray raised is not a new problem in the CFL. And the fact that the narrow demographic of the Elks is the source of serious concern in Edmonton is telling.

The CFL must find a way to appeal to younger, more diverse audiences. That’s not a new idea, but there obviously has to be new strategies if things are going to change.

The CFL’s fan base is aging out, and anyone who has been to a game lately can testify this problem is going to get worse in the not-too-distant future.

As for diversity of background, football fandom is always going to be a hard sell to recent immigrants who don’t recognize the game.

But Canada’s population has been diverse for a long time and virtually none of that diversity is showing up at CFL stadiums. It’s on the field among the players, but not in the stands.

Fan demographics are a league problem, not an Edmonton problem. The fact that a bedrock franchise is sounding alarms should be a call to action for everyone.

There has been no official edict from the CFL about teams not being allowed to pay out signing bonus money in 2022, but the prevailing wisdom is that it will be discouraged when the new football fiscal year begins the day after the Grey Cup.

Three years ago, that last time the league had an expiring CBA, teams were ordered not to pay signing bonus money, a position opposed by the CFLPA.

As a result, teams that have unspent salary budget from this season can apply that to signing bonuses for 2022 up until the day after the Grey Cup.

Montreal, which re-signed four of its offensive linemen this week, and Ottawa, which signed its kicker, punter, and returner, have both taken advantage.

With a tough CBA negotiation expected and the threat of COVID-19 not completely out of the picture, don’t look for players to be cashing a lot of cheques in the new fiscal year for simply signing their names.