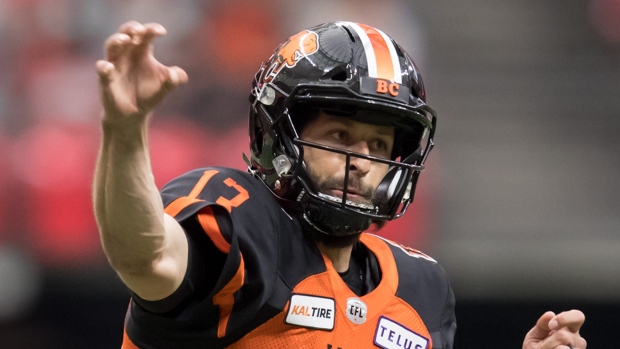 Sometimes the stars align at just the right time.

That’s how Mike Reilly is feeling these days – proud of what he gave to the Edmonton Eskimos for six seasons but also overjoyed to be a BC Lion under a new head coach and familiar general manager, and ready to help reignite a franchise.

It’s hard to imagine a better situation for Reilly, living close to his home in Seattle and signed not so much as a saviour but as someone to launch a new era of Lions football following the departure of Wally Buono and several veteran players.

“When I left B.C. and went to Edmonton [in 2013] there was a lot of excitement but also some nervous energy, maybe some anxiety, because are you going into something that is completely unknown,” said Reilly, whose team opens its regular season Saturday night hosting Winnipeg.

“This experience has been a little different because there’s still been that excitement but I didn’t really feel that nervous energy, that anxiety…I kind of knew lay of the land, the facilities, the game-day operations and a lot of the non-football ops people in the building.”

Reilly became the highest-profile CFL free agent to change teams in years, signing a four-year, $3-million deal with the Lions in February. The move reunited him with Ed Hervey, the general manager who’d given him the opportunity to start in Edmonton, and returned the quarterback to the city where his CFL career began.

With so many other changes around him, including the departure of longtime veterans like Solomon Elimimian, Rolly Lumbala and Manny Arceneaux, Reilly was able to quickly assume a leadership position both on the field and in the locker room.

“It didn’t feel like I was the new kid in the room,” he said. “I think just by the nature of our situation, with Ed bringing in a lot of different pieces in, with coach [DeVone] Claybrooks and his staff being new, I kind of felt like I had more of a background with this organization than most of the people on the team. It’s kind of a unique situation.”

While adding a player of Reilly’s status was first and foremost a football decision, the Lions also knew the potential Reilly represented in terms of invigorating the fan base and rebuilding the Lions’ presence in Vancouver. That’s not something every player gets, but Reilly wants to be part of building something larger than just wins and stats.

“What makes our league great and makes fans interested in it is that [players] are more accessible and we do feel like there’s a responsibility for that,” Reilly said. “There are a lot of expectations that come when you’re a franchise player; that your job is to try keep this league healthy and keep your particular team healthy financially. There are a lot of other things you have to do to achieve that.

“We had those discussions when I decided to come here, and that was the expectation – that I wasn’t just going to be a football player, that I was going to help in all those other areas as best as I could.”

Reilly will make his return to Edmonton in Week 2, the city where he established himself as a marquee quarterback and led the Eskimos to a Grey Cup win in 2015. Fans may be disappointed that he chose not to re-sign with Edmonton, but are they angry?

“In terms of the reception and all of that, I expect it to be an emotional experience prior to the game,” Reilly said. “I gave everything that I had to that city and to that team and to that fan base. I don’t think anyone who’s watched me play could question that … I still have a tremendous amount of respect for that franchise and the history behind it … I think the majority of people know that and I expect for the most part it will be a good reception.”

Which schools produce the most CFL players?

Where do CFL players come from? Which schools consistently turn out the most CFL talent?

Well, this being Week 1 of the season, I did some roster analysis to try to answer that question.

There is undoubtedly more randomness among the U.S. list of schools opposed to those in Canada, where the biggest suppliers of players are more predictable and consistent.

The biggest surprise is not that the University of Calgary is the largest producer of CFL talent in Canada, but by how wide a margin. There are 22 former Dinos players on opening-week rosters, 57 per cent more than the next closest school, Laval. It’s interesting to note the contribution of the French-language Quebec schools – Laval, Montreal and Sherbrooke – none of which had football programs 25 years ago, contributing 28 players to this season’s rosters.

Geographically, there is pretty good balance, aside from Atlantic Canada, where the five schools that make up the Atlantic conference – St. F.X., Mount Allison, Acadia, Bishop’s and Saint Mary’s – produced only 11 players on opening-week rosters.

There have been a lot of great players from the University of Oregon to play in the CFL and that continues to this day, with the Ducks – one of the NCAA’s consistently elite programs – contributing eight players to Week 1 rosters.

The Ducks aren’t only good, but they play an exciting, fast and creative brand of football, so perhaps it’s no coincidence they turn out such strong numbers of CFL players.

Consider that during training camps, there were four former Duck quarterbacks participating – Brian Bennett in Winnipeg (since released), Dakota Prukop in Toronto, Vernon Adams in Montreal and Jeremiah Masoli in Hamilton (although Masoli’s bio lists him as the University of Mississippi, where he transferred to complete his college career. Count him as Oregon and there are nine former Ducks in the CFL this season.) A fifth former Oregon quarterback is Edmonton head coach Jason Maas.

Here is the complete list of schools in Canada and the U.S. that have at least three players on CFL rosters to begin this season:

The mess in Montreal

These are frightening times for die-hard Montreal Alouettes fans who’ve watched their teams’ epic fall from grace continue this off-season with the departure of quarterback Johnny Manziel, the firing of head coach Mike Sherman and the franchise put on the market under a distress sale sign.

There have been too many mistakes made on the football operations side to count. But what’s really come under scrutiny of late is the Alouettes as a business and the extra incentives that may be necessary to entice new ownership.

It’s believed the league is willing to provide the buyers with funds for necessary severance payments, to make contributions against sure losses this season and perhaps even grant preferred status for hosting a future Grey Cup.

The latest potential suitors are the Lenkov brothers, Peter and Jeffrey, Montreal natives who have called California home for the past three decades. Peter, a successful television writer and producer, and Jeffrey, an attorney with a focus on entertainment and sports, would make a dynamic ownership duo on paper in terms of resources and creativity.

The question is: Could they do it from Los Angeles? And who exactly is going to run the team while they’re on the other side of the continent? Presumably, those are the kinds of questions the league is sorting through right now.

But have no doubt, when commissioner Randy Ambrosie last week cited an unidentified group as the league’s choice of buyers, it was the Lenkovs to whom he was referring.

Eric Lapointe, the former Alouettes running back who’d assembled a potential ownership group, says he’s not involved with the Lenkovs and doesn’t plan to be.

It’s believed that one or both brothers will be in Edmonton for the Alouettes’ season opener on Friday.

As for the firing of Sherman, it’s officially an in-house football move approved by the league, although there are whispers the league may have been more horse than cart on this one. Regardless, there had to be obvious problems to create enough momentum to make this happen, as embarrassing as is to an organization already suffering a serious image problem.

Sherman always seemed like a fish out of water in the CFL, which should be no surprise. His hiring tremendously impressed the team’s owners at his introductory news conference. But now those owners are nowhere to be seen, and the Alouettes are a mess.

The CFL hasn’t had this kind of situation on its hands in a long time. Unfortunately, it’s being worn by the entire league this season, in more ways than one.

The CFL announced a TV deal with MVS of Mexico this week, a toe-in-the-water arrangement that will serve to test the appetite of viewers in that country with a game of the week, plus playoffs and the Grey Cup.

The deal will net the league only about $100,000 ($20,000 of which goes to the players under terms of the recently agreed upon CBA), but there’s a lot more at stake for the CFL than that.

Ambrosie believes the league can create audiences in foreign markets by making global players part of the game, a bold and unproven theory he calls CFL 2.0. If the league can show potential on Mexican TV, it will make it a lot easier for Ambrosie to continue pushing his vision to the owners who employ him and the players he needs as partners.

There was legitimate interest when the CFL held its draft of Mexican players back in January in Mexico City. But whether that can translate into respectable audiences among a nation of 130 million people, well, we’re about to get some clues.