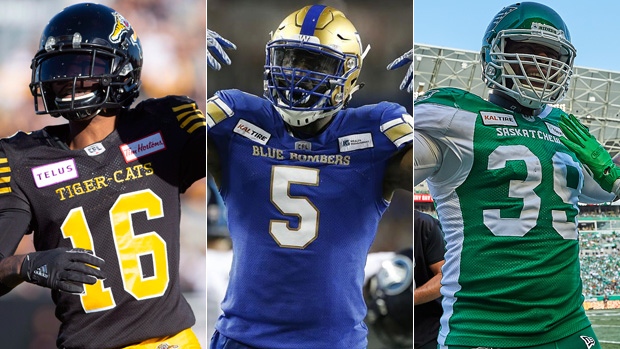 It’s the time of year when the top candidates for the CFL’s Most Outstanding Player start to come into focus.

But this season, the picture is as fuzzy as can be.

Rarely in the long history of Canadian football has pinning down the player deserving of the league’s top regular-season honour been more difficult.

- With eight of nine starting quarterbacks missing time due to injury, it’s hard to make the case for a player who has been out of the lineup for a quarter of the season or more. That instantly disqualifies Bo Levi Mitchell, Jeremiah Masoli, Matt Nichols and Dane Evans. Two quarterbacks who began the year as backups – Montreal’s Vernon Adams and Saskatchewan’s Cody Fajardo – have had impressive seasons but don’t feel MOP worthy just yet.

- No receiver is blowing away the field. The top nine receivers are separated by roughly 250 yards, so it’s by no means clear who the league’s top wideout will be. It’s the same thing with the touchdown race, where there are two receivers with eight, two with seven, and two with six.

- The best offensive player in the league has a positive PED test on his resume. There’s no consensus on whether Andrew Harris is worthy of consideration for the league’s top award, but there may be enough dissent among voters from the Football Reporters of Canada to keep him out. It’s quite possible he won’t even get the votes from the Winnipeg chapter to be the Bombers’ MOP nominee.

- An award that almost always goes to the league’s top offensive player is getting some serious challenges from the defensive side of the ball. In fact, it can be argued that several defensive players have had more MOP-worthy seasons than anyone on offence.

It says something when my three favourites for MOP include two defensive players and no quarterbacks. It's been that kind of year.

With all that said, here are 11 candidates for the CFL’s Most Outstanding Player award, divided into favourites, hopefuls and long shots.

Speedy B is three yards short of the league lead, has scored eight touchdowns and produced seven plays of 30 yards or more. His 489 yards after catch tell the story of his dynamic shiftiness and how much he helps his team by being able to turn short passes into big gains. He also contributes on returns and has two missed field goal returns for scores this season and a rushing TD.

Jefferson has been a one-man wrecking crew along the defensive line for the Bombers, knocking down passes or obstructing throwing lanes with his monstrous arms and physical presence. He’s tied for second in the league with 11 sacks, and leads the league with six forced fumbles and two fumble recoveries. He even has an interception. There have been games this season where he’s been the best player on the field for either team.

He is the CFL sack leader with 15, while adding 41 tackles and four forced fumbles and two recoveries. At age 35, Hughes is one of the CFL’s all-time pass rushing greats and showing no signs of slowing down.

He’s completed just 65 per cent of his passes this season, which ranks near the bottom of the league, but his overall performance is certainly trending upward. Over his first five starts, he averaged 203 yards per game and 0.8 touchdown passes. Over his last five starts, Adams is averaging 361 yards and two passing touchdowns. He’s become one of the league’s most exciting players and should garner some merit for lifting a Montreal team well beyond expectations heading into this season.

Fajardo had never finished a season in anything but a third-string role, so the odds of him getting into the MOP conversation, much less winning it, were stacked pretty high at the outset of the year. His last performance against Toronto (23 of 27 for 278 yards and three touchdown passes) was certainly MOP worthy, and he’s been the feel-good story of the league so far this season. But there have also been times where he’s struggled to find his way – likely too many for him to win an MOP this season.

Addison is one of those players who always seem to be making plays for Hamilton. He’s a versatile receiver who can make all kinds of catches and run the ball as well. He leads the CFL in YAC yards, is third in receptions and receiving yards, and has carried the ball 31 times to boot. With 497 yards receiving and four touchdowns in his past four games, he’s on a pace that could move him near the top of the debate.

He’s had a breakout season, but there’s no one area where Begelton stands above all other receivers – catches, yards, touchdowns or YAC yards. He’s been among the league’s top receivers all season and was heating up before missing Calgary’s last game with an injury, amassing 505 yards and six touchdowns in his four most recent performances.

Harris is the CFL’s leading passer with 15 touchdown passes against just four interceptions this season, which on the surface should make him a favourite. But it’s possible his season could be over, even though the Eskimos remain hopeful he can make a return from an arm injury before the end of the regular season. That aside, the quarterback of a .500 team with a poor record in the red zone could be a tough sell as the league’s top player.

Burnham leads the CFL with 1,155 yards, which includes a healthy 330 YAC yards, six touchdowns and 10 gains of 30 or more yards. He’s demonstrated that he’s one of the most talented and dependable receivers in the CFL, and is a bright spot in a disappointing Lions’ season. But the MOP isn’t going to be a receiver on a last-place team.

He’d be the runaway favourite were it not for serving a two-game suspension for a positive PED test last month. But it’s in the hands of the voters now, and unless Harris can change minds with the passage of time or by being absolutely dominant down the stretch, it appears his road to the MOP may be blocked.

Stanback is third in the CFL with 895 yards rushing – just 126 yards behind Harris while playing in one less game. He’s got the best yards-per-carry average in the league and the most carries of 20 yards or more to go with five touchdowns. His 26 receptions for 276 yards mean he’s already hit the 1,000-total-yards mark. While he’ll need some big games down the stretch to get into real MOP contention, last week’s 147-yard rushing performance is a reminder that he’s certainly capable.

Unless Harris gets the Winnipeg nomination for this award, the competition for MOC is going to be awfully thin.

In fact, it’s hard to think of another season where there have been fewer impactful Canadians in the league.

This award has been dominated by running backs and receivers, with players from one of those two positions winning it in each of the last nine seasons.

Last year’s winner, Redblacks receiver Brad Sinopoli, is currently ranked 26th in receiving yards, thanks mostly to Ottawa’s woeful play at the quarterback position. The top Canadian receiver is BC’s Lemar Durant, who is currently 10th in receiving with 809 yards and five touchdowns, which may be tough to beat in the MOP race, Harris aside.

That’s because there isn’t really another Canadian receiver who is close, as next on the list is Durant’s B.C. teammate Shaq Johnson, who ranks 22nd in receiving yards with 500.

Behind Harris at running back, the second-leading Canadian rusher is his backup, Johnny Augustine, whose 242 yards came mostly during the two games Harris was suspended.

So let’s move to the defensive side of the ball, where this award has landed just six times in the last 30 years – to Rickey Foley, Brent Johnson (twice), Doug Brown, Mike O’Shea and Leroy Blugh.

Calgary linebacker Cory Greenwood leads the CFL in tackles in what has been a bounce-back year for the 34-year-old who’d mostly battled injuries since returning from the NFL in 2014. But he went on the six-game injured list this week, so who knows when he'll play again?

Montreal linebacker Henoc Muamba and a pair of Saskatchewan Roughriders – safety Mike Edem and linebacker Cameron Judge – have had good seasons but seem like long shots to enter the MOC race.

On the defensive line, Edmonton’s Kwaku Boateng has six sacks and Hamilton’s Ted Laurent has had yet another solid season, minus the stats to prove it, playing in the interior of one of the CFL’s best front fours.

Of course many of the best (and highest-paid) Canadian players play at the one position that is almost never recognized with this award – offensive line.

A Canadian offensive lineman hasn’t won the MOC since Calgary’s Tony Pajaczkowski in 1961.

While we’re talking about awards…

It’s time the CFL did away with its antiquated system of every major award having one finalist from the East and one from the West.

There’s a reason no other league does this.

East versus West is a fine concept for the Grey Cup that I hope never goes away. But it makes no sense for awards since there are so many instances in which the two best players from a category come from the same division. But only one of them can be a finalist. Why?

The problems with this seem especially acute in a league as small as the CFL, where one division is 20 per cent bigger than the other.

It’s time to let the voters pick the best two players and leave it at that.