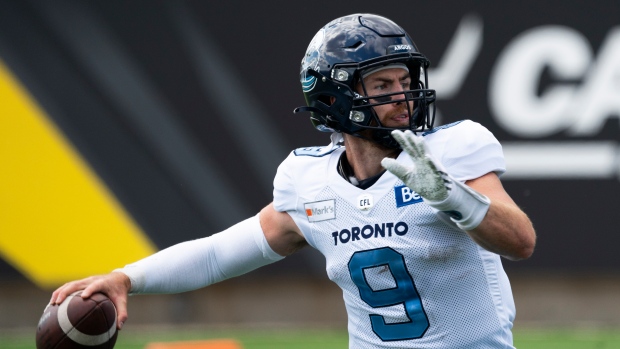 It’s not unusual for the jury to remain out on CFL quarterbacks throughout their first few years in the league, given the adjustments players must make and the steep learning curve they face no matter where they’ve played.

But it’s rare to see a player whose stock has bounced up and down as much as that of Nick Arbuckle, the 28-year-old quarterback the Toronto Argonauts dealt to the Edmonton Elks this week.

Arbuckle has been released or traded four times in the four years since he first joined the CFL with the Calgary Stampeders late in the 2017 season, the latest coming this Tuesday when the Argos dealt him to Edmonton for a draft pick and the rights to a quarterback prospect from their negotiation list.

Arbuckle won the backup job with Calgary in 2018, and then started seven games the next season while Bo Levi Mitchell was out with a shoulder injury, completing more than 73 per cent of his passes and putting up a touchdown-to-interception ratio of 11:5.

Almost overnight he’d been tabbed as a future CFL starter. So, it was no real surprise when the Ottawa Redblacks traded for his rights in January of 2020, eventually signing him to two-year contract worth more $400,000 per season that included a $200,000 signing bonus. It was a significant financial commitment to a player with less than half a season of starts on his resume, one Arbuckle answered by committing year-round to Ottawa.

Had there never been a pandemic, Arbuckle would undoubtedly have opened the 2020 season as Ottawa’s starting quarterback.

But when COVID-19 hit, resulting in the cancellation of the entire 2020 CFL season and forcing a renegotiation of Arbuckle’s contract, the Redblacks pivoted and hitched their wagon to Matt Nichols, the veteran who’d been released by Toronto.

Ottawa believed the circumstances surrounding the 2021 CFL season – the league cut the 18-game schedule to 14 games and delayed its start until Aug. 5 due to the pandemic – dictated the need for a veteran quarterback. So Arbuckle ended up on the street briefly before moving down the highway to Toronto, where his former Calgary quarterback coach, Ryan Dinwiddie, had become the head coach.

Given the lukewarm endorsement the team had given to McLeod Bethel-Thompson during three seasons, it appeared the job was his for the taking.

Instead, Bethel-Thompson is now the unqualified starter and Arbuckle is in Edmonton.

How he could have worn out his welcome so quickly in Toronto is a matter of much debate around the CFL.

Arbuckle began the season dealing with a reported hamstring injury, although he stated on the record that he was healthy from the start of the season.

After coming off the bench in relief during Toronto’s Week 2 loss at Winnipeg, Arbuckle earned the next start over the defending Grey Cup champions, throwing for 310 yards and helping hand the Blue Bombers their only defeat of the season thus far.

There seemed, at that point, little doubt who would win the No. 1 job.

Arbuckle started a three-game stretch over 12 days, throwing five interceptions as the Argos split with Hamilton and lost at Saskatchewan.

He never threw another pass as an Argonaut.

The question is why. While ball security was an issue, it’s also Bethel-Thompson who threw four interceptions in last week’s loss to the Alouettes in Montreal, just days before Arbuckle was traded.

So now he’s back in Alberta, the same province where it all began for him in the CFL nearly four years ago.

Talks are expected to begin shortly on making sure he stays in green and gold, and there’s no doubt he welcomes the feeling of being wanted, of believing that his opportunity to earn his place in the CFL won’t be so fleeting in Edmonton.

Seven seasons is an enormous length of time for a general manager hired by an expansion team.

So, by that measure alone, you have to say Ottawa hired the right man for the job in Marcel Desjardins when they re-entered the CFL in 2014.

Desjardins’ teams earned the right to play in three Grey Cups in four seasons, winning in 2016 to end a 40-year championship drought.

By that measure alone he was successful, able to do what no others had done over four decades.

By the end of his tenure, the state of the team had changed for the worse. And while the 55-year-old Desjardins may have felt he got more than his share of the blame for what took place in Ottawa after 2018, two hopeless seasons in a row is going to get any GM in the CFL fired.

All of which turns our attention to the person the Redblacks will hire to replace him.

At certain times in recent CFL history, the pool of potential candidates for vacant general manager positions has been very thin.

But right now, there are a strong number of up-and-coming candidates, as well as those who’ve won Grey Cups.

Plus, among those who will get serious consideration is interim general manager Jeremy Snyder, who was Desjardins’ assistant GM.

The one caveat every candidate will have to accept is the retention of the coaching staff, led by Paul LaPolice, who has two years remaining on his contract.

That’s going to be a dynamic the front office will have to manage carefully as they make their selection.

The Redblacks brass is spending this week preparing its list of key criteria for GM candidates, and developing a timeline for making a hire, given that this year’s Grey Cup is not until Dec. 12.

It’s going to be as important as any decision in the young history of this franchise.

It’s often said there are some players you don’t truly appreciate until they are absent.

BC Lions receiver Lucky Whitehead appears to be one of those players.

After eight weeks of this CFL season, the Lions were 4-2 and Whitehead was the league’s leading receiver, having blossomed in his role as a full-time receiver in Vancouver.

But when Whitehead broke his hand early in a game against Winnipeg the next week, so too went the direction of the Lions season. Or so it seems.

BC scored nine points that game, 10 the next week against Calgary and none the following week against Winnipeg. Scoring just 19 points in three consecutive losses has them at 4-6 and out of the current playoff picture.

There are trades in the CFL that are impossible to evaluate because not all the assets are made public.

For instance, in 1996 the Argonauts traded “the rights to a player from their negotiation list” to Calgary in exchange for receiver Tyrone Williams, a Canadian and former Dallas Cowboy.

It seemed like a steal for Toronto. That is until we get to look back and see that the player whose rights were sent to Calgary was 2006 Grey Cup MVP Dave Dickenson!

This week, the Argonauts chose to release the name of the player whose rights they acquired from Edmonton on Tuesday in the Arbuckle deal – Chad Kelly.

Kelly is the nephew of Buffalo Bills great Jim Kelly, a former Denver draft pick who has been on the active roster both in Denver and Indianapolis.

The sense is that while Edmonton wasn’t his preferred CFL destination, Toronto is a much different story. It’s an assertion from the backup quarterback when he tweeted the reporting of his rights being traded.

The Argonauts have apparently not yet reached out to the 27-year-old Kelly, who was drafted in the seventh round of the 2017 NFL Draft by the Denver Broncos, and it’s doubtful he would have been here before the end of the season anyway.

But he’s a player who could certainly be part of the Argonauts' future.

The CFL has taken a step in the right direction by bi-annually having teams release 10 names of their 45-player negotiation lists to the public.

And credit goes to the Argos for identifying Kelly as the player whose rights they acquired this week.

But in this day and age, with the league fighting against so much noise for attention, it needs to go further.

It needs to have every team’s negotiation list posted on its website, so that fans can see additions and deletions in real time.

The CFL needs talking points. It needs intrigue. It needs names with which it can associate, even speculatively.

And there’s simply no reason to keep the negotiation lists under wraps.

Coaches and GMs may say they don’t want the pressure to sign someone just because they own their rights.

That simply doesn’t fly in today’s world where leagues have to be aware of what gets them noticed, what creates anticipation or buzz.

Publish the negotiation lists for every team on their websites in real time.