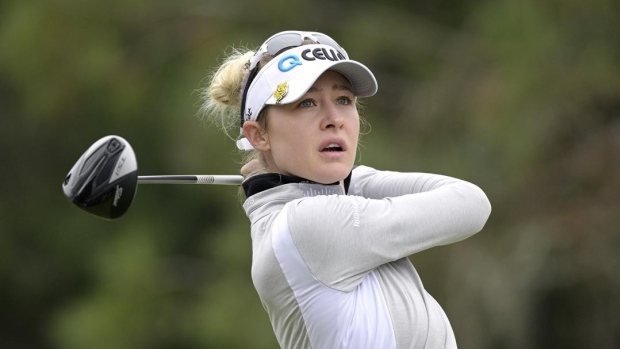 BRADENTON, Fla. (AP) — Top-ranked American and Olympic gold medalist Nelly Korda has a blood clot in her arm and is home seeking treatment.

Korda, the No. 2 player in the women's world ranking, posted on her social media accounts that she was in Ponte Vedra Beach on Friday for a commercial shoot when her arm felt as though it was swelling following a routine morning workout.

She went to the emergency room as a precaution and was diagnosed with a blood clot. She did not say which arm.

The 23-year-old Korda said she was home getting treatment, will post updates when available and hoped to return soon.

Korda last year emerged as one of the LPGA's biggest stars when she captured her first major at the KPMG Women's PGA Championship to reach No. 1 in the world and won the gold medal at the Tokyo Olympics as one of her five victories.

She ended the year playing the PNC Championship with her father, Petr, a Grand Slam tennis champion who won the 1998 Australian Open.

Korda decided to skip the LPGA Tour's two-week swing through Asia, which ended Sunday, and was scheduled to play next week at the JTBC Classic near San Diego. The LPGA's first major of the year, the Chevron Championship at Rancho Mirage in California, starts March 31.