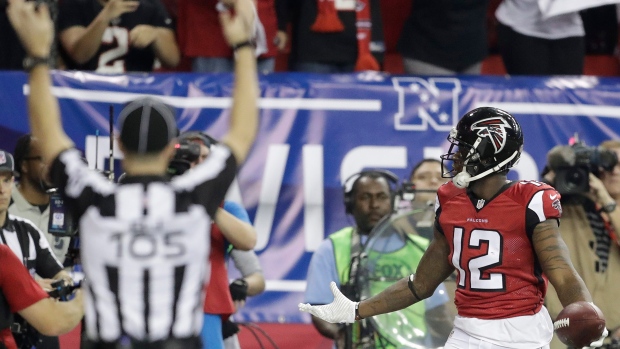 BOSTON — The Patriots have done a lot of shuffling at receiver this season.

They are hoping Mohamed Sanu can provide some stability as they try to solidify their offence heading into a difficult part of their schedule.

The Patriots traded a second-round draft pick in 2020 to the Atlanta Falcons for the eighth-year veteran, according to a person within the NFL.

The person spoke to The Associated Press on condition of anonymity because the teams were still completing Tuesday's deal, which was first reported by ESPN.

The trade came less than 24 hours after the Patriots blew out the New York Jets 33-0.

For New England, Sanu represents their latest attempt to give quarterback Tom Brady another versatile receiver to throw to following the short-lived tenure of Antonio Brown.

The 30-year-old Sanu has 33 receptions for 313 yards, but only one touchdown so far this season. His opportunities to be more involved will almost certainly increase as he heads to the reigning Super Bowl champion Patriots (7-0) and to an offence that leads the league in scoring at nearly 32 points a game.

He had a career-high 67 catches for the Falcons in 2017 and followed up with 66 catches for a career-best 838 yards last season.

"I appreciate everything the organization has done for my family & I," Sanu wrote on Twitter. "Mr. Blank, TD, Coach Q, & everyone through the organization, I am forever grateful for the opportunity. To my Teammates & fan y'all know how I feel about y'all love y'all to death. #ThankYou."

Sanu joins a receiving group that includes Super Bowl MVP Julian Edelman, Josh Gordon, Phillip Dorsett, Jakobi Meyers and Gunner Olszewski. The Patriots also have N'Keal Harry, a first-round pick in this year's draft who went on injured reserve after hurting an ankle during training camp. He is eligible to return to the roster in Week 9.

But with Gordon currently recovering from ankle and knee injuries the offence needs help sooner rather than later. New England is preparing for a challenging second half of its schedule that includes matchups with Baltimore, Philadelphia, Dallas, Houston and Kansas City.

Sanu won't provide the deep threat of Gordon or Brown, but he has proven to be a reliable option as a slot receiver. That will help take the pressure off Edelman, whom Brady has relied on heavily this season in third-down situations.

Sanu's presence also will only benefit young receivers such as Meyers, a promising rookie who had a season-high five catches for 47 yards against the Jets.

For the Falcons, the move is a signal they are already looking to the future just seven weeks into the season. Atlanta (1-6) is mired in a five-game losing streak and off to its worst start since 2007.

Even before the trade, Sanu seemed unlikely to remain with the Falcons beyond this season. He has one year left on his contract, but the Falcons are facing some tough salary cap decisions and already have Julio Jones and Calvin Ridley to anchor the receiving group.