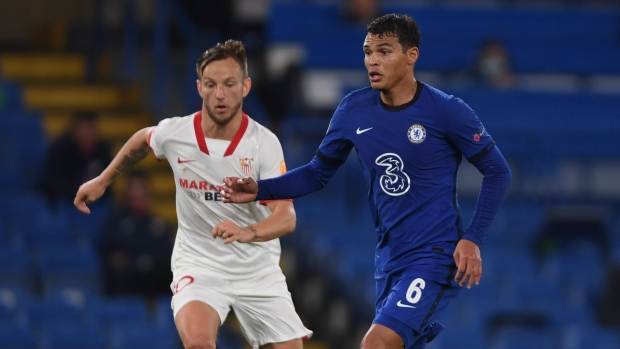 LONDON — For the first time since its $300 million spending spree, Chelsea finally got its six major summer signings on the field together.

They couldn't find a way past Sevilla in the Champions League on Tuesday.

Sevilla kept new-look Chelsea at bay in a 0-0 draw in Group E, with the English team involved in its first goalless match since Frank Lampard arrived as manager in the off-season on 2019.

Lampard managed to cure his team's issues at the back as Chelsea put on a solid defensive display at Stamford Bridge, helped by the return to the lineup of centre back Thiago Silva and goalkeeper Edouard Mendy — two of the new recruits.

And at one stage in the second half, Timo Werner, Kai Havertz, substitute Hakim Ziyech and Ben Chilwell — the other four expensive signings — were all out there for Lampard but Sevilla held firm in a game of few real opportunities.

The Spanish side lost centre back Sergi Gomez to injury in the first half, but restricted Chelsea to half-chances. The best fell to Kurt Zouma, who was unmarked at a corner but headed straight at the goalkeeper.

The closest Sevilla came to a goal was when Joan Jordán's volley — straight from a corner by Ivan Rakitic — flew just over the crossbar in the second half.