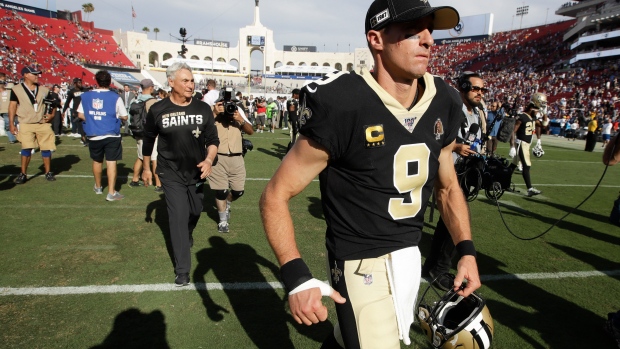 Finally, some good news when it comes to an injured quarterback.

#Saints coach Sean Payton tells reporters today that he does not plan to place QB Drew Brees on Injured Reserve, which sounds like good news. It indicates NO believes Brees can be back within 8 weeks. 6 weeks was the initial estimate.

New Orleans Saints head coach Sean Payton told reporters Wednesday that the team does not plan to place Drew Brees on injured reserve. Ian Rapoport of the NFL Network notes this indicates the Saints believe Brees could be back within eight weeks (which he would have to miss if he went on IR). The initial estimate for his injury was about six weeks.

Payton added that Brees is having surgery Wednesday and the team will continue to monitor the situation.

Brees was injured in Sunday's 27-9 loss to the Los Angeles Rams, leaving the game after his hand made hard contact with Rams defensive lineman Aaron Donald while following-through after a throw. Brees indicated after the game that he was "very concerned" about the injury.

"I felt it right away. You might get jammed thumbs or fingers, different things where it swells up. This felt like it was more significant and prevented me from gripping the ball," said Brees of the injury.

"I told him I'm hoping for the best," Rams quarterback Jared Goff said Sunday. "He's a great player for this league, a face of the league, and somebody we need in the league."

Brees was 3-of-5 for 38 yards and an interception prior to his departure. Teddy Bridgewater filled in under centre for New Orleans, going 17-of-30 for 165 yards and no touchdowns. New Orleans did not score a touchdown for only the fourth time since Sean Payton became coach in 2006. It is also just the second game Brees will miss since high school, adds Schefter.

The Saints also have quarterback Taysom Hill on the roster, who has been used in different situations throughout the last two seasons but often in a rushing or receiving capacity.

The Saints (1-1) will take on the Seattle Seahawks in Week 3 next Sunday.