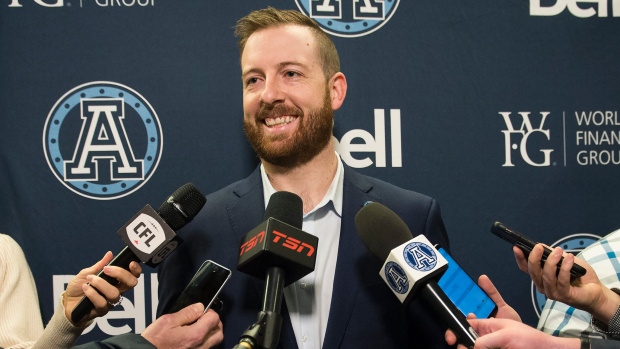 That's when Toronto faces the Winnipeg Blue Bombers this season. Nichols expects to be under centre for the Argos, who signed the 32-year-old Californian to a three-year deal Friday, less than two weeks after he was released by the defending Grey Cup champions.

"No, I'm out for everyone every time I'm out on the field," Nichols told reporters Monday. "I'm very gracious for the time I had (with Winnipeg), some of the best times of career.

"One of my daughters was born there so it will always have a special place for me but at the same time it's not something I take personally. I kind of got injured in a contract year, they decided to move on (and) that's led me to this opportunity and I couldn't be more excited for it."

The six-foot-two, 211-pound Nichols spent five seasons with Winnipeg, going 40-24 as a starter. The Bombers were 7-2 when Nichols suffered a season-ending shoulder injury in a win over B.C. on Aug. 15.

Nichols continues to rehab the shoulder and fully expects to be ready to play when training camp opens in May.

But he became expendable after Winnipeg re-signed veteran Zach Collaros last week. The Bombers acquired Collaros from Toronto on Oct. 9 prior to the CFL trade deadline.

Then again, Winnipeg didn't need one. Anchored by a tremendous offensive line and Canadian Andrew Harris, the Bombers averaged a CFL-best 147.9 yards while Harris ran for a league-high 1,380 yards.

The Bombers did average a CFL-low 212.2 yards passing per game. But Winnipeg countered with a solid ground game and a tenacious defence — league-low 64.2 yards rushing allowed, 45 turnovers (second-most) and 24 interceptions (second overall).

Over his four starts with Winnipeg, Collaros finished 67-of-97 passing (69.1 per cent) for 851 yards with four TDs and just one interception. He also didn't record a 300-yard passing game.

But that hasn't deterred Nichols' critics from labelling him a "game manager" because of his passing statistics.

"For me, that whole thing was for some reason you get this negative term for winning a lot of football games," he said. "Just doing things the right way is what matters to me.

"You can label it however you want. I'm going to be coming in and working my butt off and do everything I can to help this team win games."

Wins have been hard to come by for Toronto, which has posted consecutive 4-14 records since winning the '17 Grey Cup. And Nichols faces competition in training camp for the starter's job from veteran McLeod Bethel-Thompson, who signed a one-year extension last week.

Upon re-signing, Bethel-Thompson declared in his mind he remains Toronto's starter. And that sentiment is fine with Nichols.

"I think having that mindset from the jump will be a big difference."

"That (quarterback) is a crucial piece but it's a part," Clemons said. "It's not just having one competent guy but having two at that position and they'll really play off each other well.

"Both are great locker room guys, both are very strong spirits and very positive as well."

But Nichols sensed an immediate connection between himself and Argos head coach Ryan Dinwiddie, who is entering his first season as a CFL head coach after serving four years as Calgary's quarterback coach.

"Talking Xs and Os with coach Dinwiddie, I think we're on the same page with a lot of stuff," Nichols said. "It felt right, it felt like we connected immediately."

"I think a lot of it will come down to the pieces we ultimately have in place after free agency," Nichols said. "But at the same time I think the offence (Dinwiddie) is coming from is an offence that was a little bit more open, threw the ball a little bit more than what we did last couple of years."

Nichols' present situation is similar to the one veteran Ricky Ray faced in 2012. Dealt to Toronto by Edmonton in December 2011, Ray went on to lead the Argos to a Grey Cup under a rookie head coach (Scott Milanovich).

"Last weekend I went to Ricky's house and talked to him for a couple of hours," Nichols said. "He loved his time in Edmonton but playing in Toronto were his favourite years.

"It's kind of cool the two of us from the same hometown, he got traded here in 2012 and went to a Grey Cup and this is a similar feeling to me. I plan on doing the same."