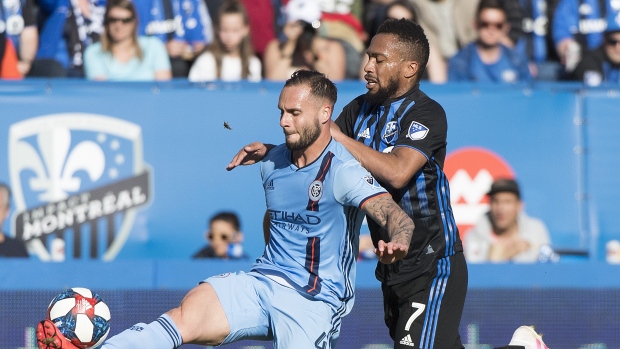 MONTREAL — Another early deficit was too much for the Montreal Impact to overcome.

New York City FC capitalized shortly after kickoff en route to a 2-0 victory over the Impact at Saputo Stadium on Saturday afternoon.

Argentinian midfielder Maximiliano Moralez found the back of the net six minutes in, pouncing on a rebound from Impact goalkeeper Evan Bush for his first marker of the season after an initial shot by defender Ben Sweat.

"Once again we were down on the score early in the game, and it's never a good situation," said Impact head coach Remi Garde.

It was the first goal Montreal had allowed at home this season.

In the second half, it was more of the same.

Forward Ismael Tajouri-Shradi found himself alone inside the box and made no mistake in the 49th, finding the top left corner on Bush for his fourth goal of the season to double NYCFC's lead.

"Conceding a goal in the first six minutes is not ideal for any team," said Impact midfielder Michael Azira. "That gave them some stability. On the second goal, the ball bounced back to (Ismael Tajouri-Shradi). You can't do anything."

The Impact registered a season-low zero shots on target, partly due to a crowded midfield.

"They had five (players) in the middle, we had three," Azira said. "That makes it a little bit different."

After NYCFC (3-1-6) dominated the first 30 minutes, while pinning the Impact (5-4-2) defensively, Montreal found its legs near the end of the first half.

The Impact's best chance of the game came in the 36th minute, when Saphïr Taider misfired on a beautiful cross from Zachary Brault-Guillard.

"I have the feeling that we could have deserved one or two goals in that game," Garde said. "I think Saphïr had a very good opportunity in the first half…it's not like we didn't create anything."

The Impact were once again without star midfielder Ignacio Piatti, who has been nursing a knee injury for the past eight games.

Garde acknowledged that the 34-year-old's absence is starting to be felt.

Piatti has suited up for just three of the team's 11 matches, but is still tied with Taider for the team lead with three goals.

At times on Saturday afternoon, NYCFC was able to assert itself by moving the ball at will through Montreal's midfielders.

"We've missed our best player for a long time now," he said. "We can't forget that. It's difficult."

Despite the loss, Garde was positive about the Impact's attitude and compete level during the match, noting that it had improved considerably compared to when he first assumed coaching duties in 2017.

"We were quite confident at halftime that we could come back and score," he said. "The attitude was right, the desire to score and the desire not to concede another one. Even after 2-0, I saw many players that ran back with high intensity and defend for the team, which is good. In some games, we didn't have that."

The coach feels the game was something to build off of as the Impact embark on a two-game road trip to face the New York Red Bulls and FC Cincinnati next week.

"You cannot be pleased after a defeat, especially at home, but the collective attitude has been good tonight," he said.

"I'm really disappointed for all the players regarding the effort they have made."

Notes…Moralez’s marker was the first goal Montreal surrendered since April 20 when they lost 3-0 at Philadelphia…Ignacio Piatti (knee injury) missed his eighth straight game…Montreal had a season-low zero shots on target.