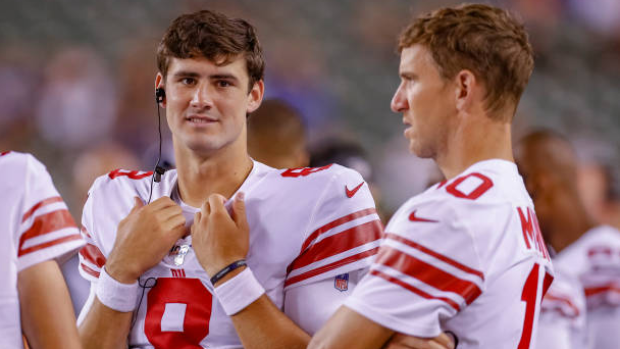 The Daniel Jones era for the New York Giants appears to be on hold.

The rookie quarterback's high ankle sprain means that it's "very likely" that Eli Manning will start behind centre on Monday night against the Philadelphia Eagles, says head coach Pat Shurmur.

#Giants coach Pat Shurmur tells reporters that QB Daniel Jones is in a walking boot with a mild high-ankle sprain… and Eli Manning will “very likely” start on Monday. So, Manning gets a potential farewell tour, after all.

Jones was in a walking boot on Wednesday, but Shurmur notes the sprain is mild and compared it to the injury running back Saquon Barkley had earlier in the season that sidelined him for three games.

Daniel Jones in a boot + has moderate high ankle sprain, per Pat Shurmur. He couldn’t play if Giants had game today. Shurmur compared it to what Saquon Barkley had, slightly less severe. Barkley missed three games. So get ready for the return of Eli Manning on Monday vs Eagles.

Manning, 38, was replaced as starter in Week 3. Through two games, the two-time Super Bowl winner threw for 556 yards on 56-for-89 passing with two touchdowns and two interceptions.

In his 16th season out of Ole Miss, Manning is in the final year of a four-year, $84 million deal. The New Orleans native is highly unlikely to return to the Giants next season.