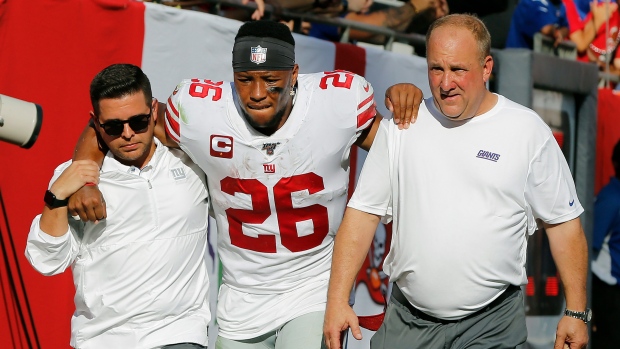 New York Giants running back Saquon Barkley has a high ankle sprain, and will go for an MRI on Monday, according to ESPN's Adam Schefter.

Giants diagnosed RB Saquon Barkley with a high ankle sprain and he is scheduled to undergo an MRI on Monday, per source.

Barkley left his team's game against the Tampa Bay Buccaneers late in the first half with the ankle injury.

He was helped off the field and didn't return to the game.

Injury Update: Saquon Barkley (ankle) and Alec Ogletree (hamstring) are Out for the remainder of the game.

The running back was seen with crutches and a walking boot while on the sideline, and met with the media after the game.

"I don’t really know too much about the injury," Barkley said, "I got an x-ray on it and nothing is wrong with it there. Tomorrow I’m going it get more of an understanding of what it actually is."

Barkley had just eight carries for 10 yards and another four receptions for 27 yards at the time of his injury.