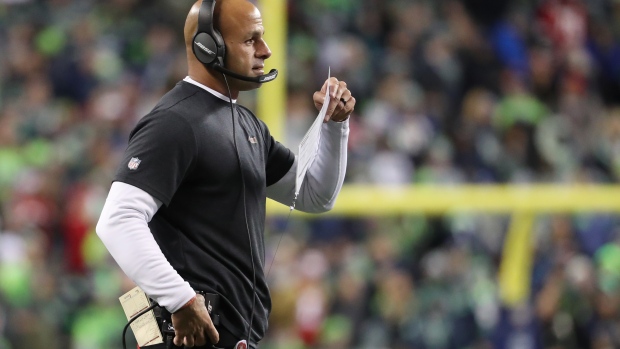 NEW YORK — Robert Saleh left no doubt for the New York Jets that he was their guy. And he knew this is exactly where he wanted to be.

“Throughout the interview process, it became clear that this is the right place to call home,” Saleh said in a statement issued by the team.

The 41-year-old Saleh, who is the first Muslim American coach in NFL history, was one of nine candidates interviewed by New York, but the first to get an in-person meeting last Tuesday at the team's facility in Florham Park, New Jersey. He left without a deal and the Jets later spoke in person to then-Tennessee offensive co-ordinator Arthur Smith — who was later hired by Atlanta.

“After a thorough process and meeting with a number of talented coaches, it was clear to us that Robert was the right person to help us move forward,” Johnson said in a statement. “He is a collaborative leader with proven success in the NFL. In addition to his work as a coach on this level, his passion and knowledge of the game along with his vision for establishing an identity for this team sold me."

Saleh is scheduled to be formally introduced by the team at 2 p.m. Thursday in a Zoom news conference.

"There are no shortcuts to success, and I am committed to working with Joe to build this team the right way: with talented players that play fast and smart, and a staff that supports and helps develop them through it all,” Saleh said in a statement. “To Jets fans, your passion and commitment are priceless. I understand your expectations and embrace them. We have a lot of work to do and can’t do it without your support.”

When the team began its search after firing Adam Gase on Jan. 3, both Johnson and Douglas spoke about finding someone who had strong character, was a leader and would be a “partner” with them in leading the Jets back to respectability. Johnson said Saleh would be exactly that for them to “help foster and develop the winning culture we are striving to establish.”

New York has not made the playoffs since the 2010 season — currently the longest active drought in the NFL.

“We spoke to some tremendous coaches, but Rob is the right partner and leader for us,” Douglas said in a statement. “His vision for this team aligns with what we have been working to establish here the last two years.”

Saleh has been recognized as an energetic leader who is well liked by his players and fellow coaches. He had been the 49ers’ defensive co-ordinator under Kyle Shanahan since 2017, overseeing San Francisco’s defence that ranked No. 2 overall on the way to the Super Bowl last season.

"For us as a group, we were impressed with the way he commanded the space and his ability to communicate his vision throughout the process,” Douglas said.

Saleh, the son of Lebanese parents, is the second minority coach to be hired by the Jets in the past six years, joining Todd Bowles, who is Black, in 2015. Saleh is believed to be the third Arab American to become a head coach in the NFL. He’s also the fourth active minority coach in the NFL, joining Miami’s Brian Flores, Washington’s Ron Rivera and Pittsburgh’s Mike Tomlin.

“You never travel these roads alone and there are so many that have helped along the way, but without my wife, Sanaa, this journey would have been impossible," Saleh said. "Thank you for everything. We have six amazing children, with one on the way, and now we are all proud to be part of Jets Nation.”

Saleh, from Dearborn, Michigan, began his coaching career in 2002 as a defensive assistant at Michigan State for two seasons, followed by stints at Central Michigan and Georgia. After stops with the Houston Texans, Seattle Seahawks and Jacksonville Jaguars, he was hired by Shanahan and quickly established himself as one of the NFL's top assistants.

“There is not much I haven’t already said about Robert’s abilities as a coach and as a leader," Shanahan said in a statement. "As a friend, I respect him greatly and could not be happier for him, Sanaa and their family. Robert helped to build a successful environment that has developed both players and coaches, and we are thankful for everything he brought to the 49ers these last four years. We wish him all the best.”

Saleh has begun to shape his coaching staff, although nothing has been made official yet by the team. San Francisco passing game co-ordinator Mike LaFleur is joining Saleh in New York as his offensive co-ordinator. LaFleur is the brother of Packers coach Matt LaFleur, who was the best man at Saleh's wedding and whose team is playing in the NFC championship game Sunday.

“I could tell you right now," Matt LaFleur said, "I wouldn’t be standing where I am without Robert Saleh.”