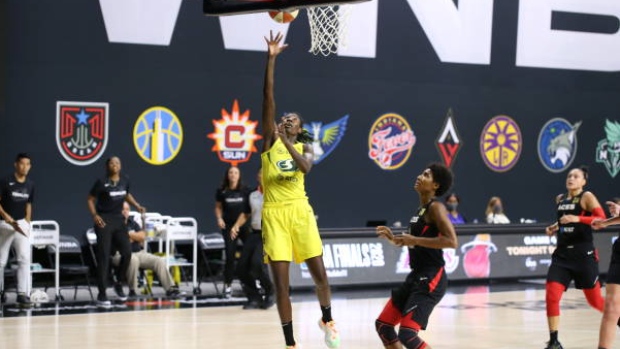 After dealing Kia Nurse and Megan Walker to the Phoenix Mercury, the New York Liberty have acquired two WNBA champions from the Seattle Storm in Natasha Howard and Sami Whitcomb in separate deals.

The Liberty sends the first overall pick in the 2021 WNBA Draft, the 2022 first-round pick acquired in the Mercury trade and its 2022 second-round pick to the Storm for Howard (via sign and trade).

Also coming over from the Storm is guard Sami Whitcomb via sign-and-trade in exchange for the rights to forward Stephanie Talbot.

“We have the privilege of welcoming multiple-time WNBA champions Natasha Howard and Sami Whitcomb to Brooklyn,” said general manager Jonathan Kolb. “The magnitude of Natasha choosing to be in New York cannot be overstated. She is an All-WNBA talent who has worked for and earned everything that she has achieved, who has contributed to championship runs on multiple teams, and who will fit seamlessly into Walt Hopkins’ system.

“Sami Whitcomb will be an instant fan favorite, not only for her elite shot making ability, but also for her tenacity and drive. A two-time champion in her own right, Sami knows what it takes to win in this league, and is exactly the kind of tough, talented, culture-first player we covet in New York.”