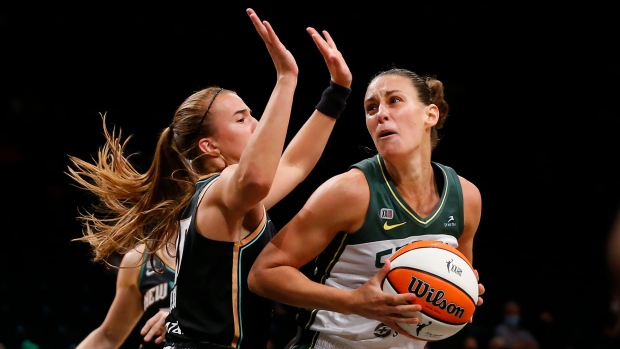 NEW YORK (AP) -- Betnijah Laney scored 17 points, including the go-ahead basket from the top of the key with 17.6 seconds left, to lift the New York Liberty to an 83-79 victory over the short-handed Seattle Storm on Wednesday night.

The Liberty (11-12) trailed by 10 heading into the fourth quarter before rallying behind Rebecca Allen, who had nine of her 17 points in the period. Her third 3-pointer of the quarter made it a two-point game with 1:38 left.

After a basket by Natasha Howard tied it. New York then got a stop on the other end and Laney took a few dribbles from the wing and banked in a shot just inside the 3-point line to beat the shot clock.

Laney then stole the ball on the ensuing possession and New York's Sami Whitcomb made two free throws with 2.6 seconds left to seal the win.

The comeback ruined a stellar effort by Jewell Loyd, who scored 21 of her 35 points in the third quarter for Seattle. The 35 points matched her career best.

The Storm (16-7) were missing stars Sue Bird and Breanna Stewart, who were still resting after leading the U.S. to a seventh consecutive gold medal at the Olympics earlier this month. They are expected back when the teams play again on Friday.

It didn't appear their absences would matter as the Storm still had Loyd, their third Tokyo Games gold medalist.

Trailing by one at the half, Loyd took over with a dazzling shooting display. She scored 17 of the team's 19 points in the first five minutes of the third quarter to give the Storm a 58-49 lead. She hit jumpers from virtually everywhere on the court, making seven of her first eight shot attempts in the period.

By the time the quarter was over, Loyd outscored the Liberty 21-20 and Seattle led 72-62. New York scored 10 of the first 12 points in the final quarter to get back in the game.

New York was missing Jazmine Jones, who was sidelined with a minor right foot injury. She was in a walking boot, but coach Walt Hopkins said she is day-to-day.