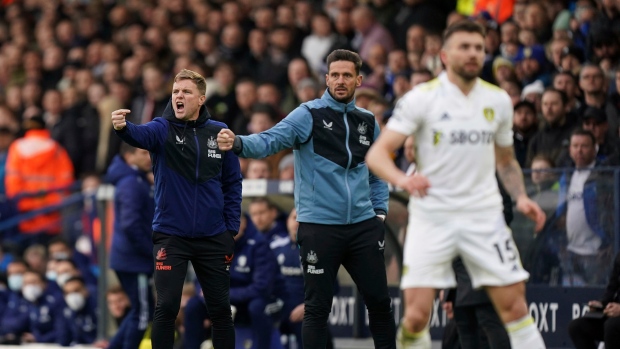 LEEDS, England (AP) — Newcastle claimed just its second Premier League win of the season by beating Leeds 1-0 on Saturday in a big boost to its ambitions of avoiding relegation.

Jonjo Shelvey's low free kick flew past a slew of outstretched legs in the area and squeezed into the far corner of the net in the 75th minute at Elland Road.

The victory wasn't enough to lift Newcastle out of the relegation zone but the Saudi-owned team is only one point from safety with a game in hand on fourth-to-last Norwich, which won at Watford on Friday.

Eddie Howe’s side was under pressure for long spells against Leeds, which was seeking a third straight win to move further clear of the bottom three. Marcelo Bielsa's team is now looking back over its shoulder after being punished for failing to cash in on its dominance.

Newcastle went close itself in the 28th minute when Shelvey’s thumping volley was well saved by Illan Meslier.

Raphinha caused Newcastle left back Paul Dummett lots of problems and set up another chance for Leeds that was wasted, before Newcastle forward Joelinton limped off just before halftime.

Leeds stayed in control at the start of the second half, with Dan James and Raphinha both cutting through the visitors’ defense only for the final ball to eluded their teammates.

Another injury for Newcastle saw defender Jamaal Lascelles limp off — Dummett had already been replaced by Javier Manquillo by then — but Howe’s side gave warning it was not done. Sean Longstaff fired narrowly wide from 20 yards (meters) and the visitors then silenced the home crowd with Shelvey's goal.