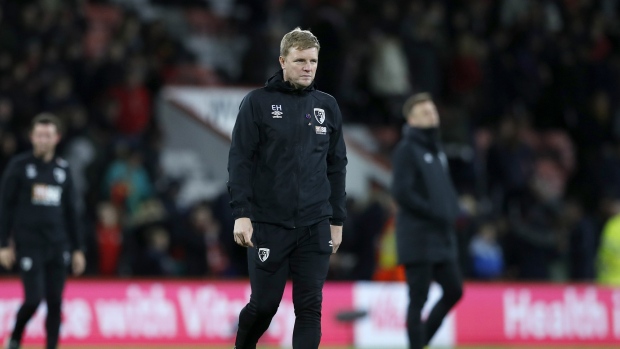 Newcastle United finally have their man.

The club appointed Eddie Howe as manager on Monday on a contract through 2024.

We are delighted to confirm the appointment of Eddie Howe as the club’s new head coach.

The job marks the 43-year-old Howe's return to management after leaving Bournemouth by mutual consent at the end of the 2019-2020 season.

"We have been incredibly impressed by Eddie through what has been a rigorous recruitment process," Toon co-owner Amanda Staveley said in a statement. "As well as his obvious achievements with AFC Bournemouth, where he had a transformational impact, he is a passionate and dynamic coach who has clear ideas about taking this team and club forward."

A native of Amersham, England, Howe spent eight seasons with the Cherries, the club for whom he made 200 league appearances for as a player, leading them from League One to the Premier League.

"This is a wonderful opportunity, but there is also a lot of work ahead of us and I am eager to get onto the training ground to start working with the players," Howe said. "I would like to thank the club's owners for this opportunity and thank the club's supporters for the incredible welcome they have already given me. I am very excited to begin our journey together."

Howe becomes the team's first manager under the new ownership of the Saudi Arabia Public Investment Fund, who took over the club in October from Mike Ashley.

Former manager Steve Bruce left the club by mutual consent on Oct. 20 with Graeme Jones having been serving as caretaker manager.

Howe takes over with the Magpies in the relegation zone. Newcastle sits 19th in the table, five point back of Watford for the final safe spot.

The team returns to action after the international break on Nov. 20 when they host Brentford.