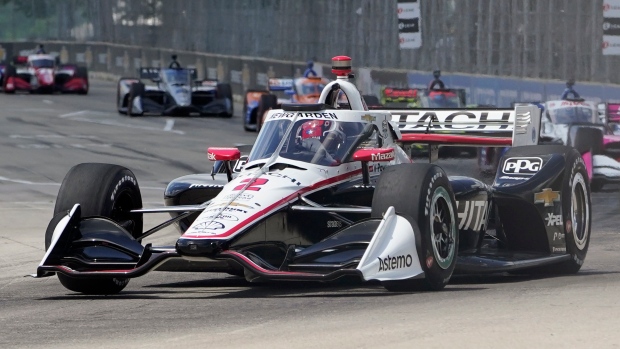 LEXINGTON, Ohio (AP) — On the final lap of warmup before the IndyCar race at Mid-Ohio Sports Car Course, Josef Newgarden heard “an audible vibration” in his engine that concerned him enough to alert his team.

Had he cut his warmup one lap short, another race weekend might have been ruined.

Team Penske and Chevrolet pulled Newgarden's engine ahead of Sunday's race, saving him from a potentially disastrous third consecutive defeat. Instead, he snapped his streak of late race misfortunes and won for the first time this season — earning the first IndyCar victory of the year for Team Penske on the same weekend the storied organization celebrated the 50th anniversary of its first win.

“If we had cut warmup one lap short, who knows? The engine could have gone on the parade lap for all we know,” Newgarden said. “That just would have been demoralizing.”

Newgarden led all but seven of the 80 laps at Mid-Ohio to earn an overdue victory. The two-time IndyCar champion dominated the two races leading into Sunday, but late yellows altered the outcome and denied Newgarden two trips to victory lane.

The American insisted nothing needed to change on the No. 2 team because the performance was just fine. After all, he had started from the pole and led 99 of 125 laps in the two races he lost after late restarts.

Now he's led 172 of 205 laps — or 83.9% — over three races and finally put Team Penske in victory lane in the 10th race of the season. The last time the Penske organization went this late in the year without a victory was its 1999 winless season.

“The speed, everything is there,” Tim Cindric, team president and Newgarden's strategist, told The Associated Press. “It's about trying to keep morale up with the team. We've led so many laps, it's ridiculous to have not had a win.”

Team Penske on Saturday marked the 50th anniversary of its first IndyCar win, with Mark Donohue at Pocono. The team celebrated by presenting Roger Penske with a commemorative trophy of Donohue's victory shaped as Pocono's “Tricky Triangle” with th e original program covers, ticket, parking pass and other memorabilia worked into the design.

Penske was one of the first to greet Newgarden in victory lane, where he celebrated his 19th victory — an IndyCar record for an American driver.

“Josef's confidence never wavered, that's the quality guy that he is — he doesn't walk around with a long face, he's putting his arms around the guys and trying to create momentum with the team,” Penske told AP. “So then to win, ironically on the weekend that was 50 years since our win with Mark Donohue, we needed this.”

This one again seemed to be in the bag for Newgarden — particularly after a pair of slow pit stops took fellow front-row starter Colton Herta out of contention — but a hard charge from Marcus Ericsson put Newgarden on the defensive. He had to hustle his way through the 13 turns over the final two laps to hold off the Swede by 0.8790 seconds.

IndyCar points leader Alex Palou finished third and was followed by six-time and reigning IndyCar champion Scott Dixon as Honda cars owned by Chip Ganassi went 2-3-4. Ganassi earlier this week said he had sold his NASCAR team and will focus on his IndyCar, IMSA sports cars and Extreme E teams at the end of the year.

“We had a great day, the whole team, to get 2-3-4 was a great result,” Ericsson said. “We were pushing very, very hard out there to catch Josef and a couple more laps, we could have challenged for it.”

Will Power, one of four Penske drivers in the field, was involved in one of the three earlier cautions at the start of the race when contact with Dixon sent Power spinning into a blind turn. Incoming traffic couldn't see Power stopped in the middle of the track and he was drilled by Ed Jones.

Power had his right hand wrapped when he left the care center and did not return to the race.

Palou scored his sixth podium finish of the season and pushed his lead in the championship race to 39 points over Pato O'Ward.

There are six races remaining for the Spaniard to hold off the challengers — which include former champions Newgarden and his own teammate Dixon. Palou has a 56-point lead over Dixon, while Newgarden is 69 points back.

“We’re going to win this championship just by being here every weekend, getting some more wins,” Palou said. “I mean, I would stop the count now, but I don’t think they'd allow me to do that. We’ll try to win some more races and be at the podium.”

Newgarden said Palou is the biggest threat of the crop of four young drivers who have taken the series by storm this season. Palou at 24 is the oldest of the four and has had a breakout year since joining Ganassi this season, his second in IndyCar.

Palou has two wins through 10 races and has finished lower than seventh only twice.

“I would give him the highest marks of all the young guys. I think he’s the most complete,” Newgarden said. “You look at the young crop. There’s some serious talent in this series from top to bottom, whether it’s young or the middle guys or old guys, but amongst the newcomers and the young generation, he looks to be the full package.”

Kirkwood's win Sunday was his second of the weekend and fifth in last six races. The 22-year-old has won six of the 12 Indy Lights races so far this season and leads the points standings for Andretti Autosport.

Kirkwood is remarkable at Mid-Ohio and has won all seven races he has entered in the Road to Indy ladder system.