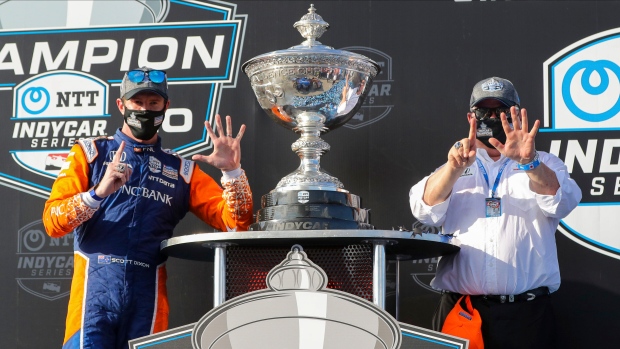 Anything short of a victory on the streets of downtown St. Petersburg left Newgarden with almost no path to deny Scott Dixon another championship.

Newgarden used a spectacular two-car pass for the lead to indeed win at St. Pete but it wasn't enough as Dixon stealthily finished third to collect yet another ring in his storied career. The 40-year-old New Zelander won his sixth title for Chip Ganassi Racing. He was a tactician and followed Newgarden all day; a finish of ninth or better gave him the title no matter where Newgarden finished.

“They just shadowed us all day, it was the smart play,” said Newgarden, who admitted his shot at the title was so slim it spoiled his mood the entire weekend.

Dixon has won two of the last three titles, a run interrupted last year when Newgarden won his second championship. The Tennessean tied Dixon with his series-best fourth win of the season but Newgarden was in too large of a hole after Dixon opened the abbreviated and pandemic disrupted schedule with three consecutive victories.

Newgarden, winner of two-straight at St. Pete, went to victory lane to congratulate his rival.

The season was supposed to begin seven months ago on these same streets before it was abruptly cancelled 48 hours before the green flag. It came to a close in front of a sold-out 20,000 spectators. the largest crowd of the season for IndyCar.

Although IndyCar lost races in seven cities and had just one street course, Sunday's finale, still managed to complete a 14-race season. IndyCar became the first major motorsports series to make it to the checkered flag, relatively unscathed, and as stable as anyone can be during the pandemic.

Stewardship from first-year series owner Roger Penske got IndyCar to the finish and Penske brought his awful inaugural season full circle with Sunday's finale. The last hurrah of a decent season was a dramatic error-prone ender in which three Andretti Autosport drivers ruined race-winning runs and Newgarden went down swinging.

The race was an Alexander Rossi runaway for the first 37 laps and then pole-sitter Will Power crashed for the first caution. Power, who was in a tight race for third in the final standings, threw his gloves in anger and admitted to driver error.

“I just lost it. Had a moment," he said. "I was definitely frustrated there, making a mistake and hitting the wall. It’s my bad. It put us out of the race and that’s a bad situation.

The Power crash triggered a span of three cautions over the next 10 laps, the third on a restart on lap 47 when brand new teammate Scott McLaughlin spun in his IndyCar debut. The New Zealander won his third consecutive Australian Supercars championship one week ago then journeyed to the United States to launch a new career at Team Penske.

McLaughlin's wreck also collected Rinus VeeKay, who still clinched rookie of the year on the day he was renewed for a second season with Ed Carpenter Racing.

McLaughlin finished 22nd, just two spots ahead of Power in last, but was thrilled with his 47-lap experience.

“Awesome. Far out. The best day of my life, besides my wedding,” enthused the 27-year-old newlywed.

Rossi then triggered a tailspin for the Andretti organization when he spun on lap 70 spun in marbles while racing for the win. Rossi had been determined to extend a streak of at least one win a season that dates to 2006 when was Skip Barber's youngest champion at 14-year-old.

His long and frustrating season ended with a 21st-place finish for the Andretti Autosport driver.

“Just lost it. It sucks, this is the first time I've crashed while leading," Rossi said.

It got even worse roughly five minutes later when Marco Andretti spun while racing for the final spot in IndyCar's bonus program. Andretti, the Indianapolis 500 pole winner, has not announced a program for 2021 and he was clearly furious as he paced outside his car in an incident that could have cost the race team about $1 million in bonus pay.

Canadian James Hinchcliffe, in another Andretti entry that had run in the top three most of the race, then spun, as well.

The pace car, used at that point for an unusually quick run of caution, reported it was low on fuel and then Colton Herta — in yet another Andretti car — spun after running for the win most of the day with Rossi and Hinchcliffe.

Newgarden had control but soon had Pato O'Ward on his corner, looking for the lead. O'Ward couldn't execute and Newgarden put space on the challenger by stretching his lead to nearly a full second with 10 to go.

The exiting champion was in cruise, but all the earlier attrition helped Dixon slip through the field to third. There was nothing Newgarden could do, even on a day he did everything he had to, to deny Dixon a sixth championship.

Dixon, considered the best of his generation, ranks third on IndyCar's all-time wins list behind A.J. Foyt — the series' only seven-time winner — and Mario Andretti. His first title was in 2003, his first season with Ganassi, and his latest championship comes as the team has welcomed NASCAR's seven-time champion Jimmie Johnson to the organization.

Ganassi next year will have the two most prolific drivers of their respective series on the same team.

O'Ward, in his first full IndyCar season, finished third in the race and third with Arrow McLaren SP in the final standings.