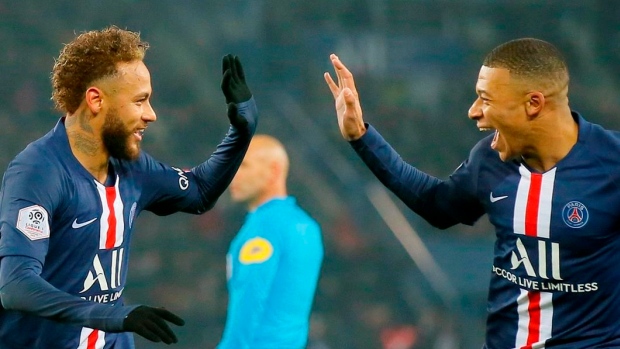 PARIS — Neymar, Kylian Mbappe and Mauro Icardi used their individual brilliance to compensate for a poor team performance as Paris Saint-Germain recovered to beat Montpellier 3-1 in the French league on Saturday.

The match was briefly interrupted toward the end after PSG goalkeeper Keylor Navas was hit by a projectile thrown from a stand with Montpellier fans. Navas appeared uninjured and carried on until the final whistle.

In front of a capacity crowd at La Mosson stadium, PSG struggled to develop its threats for most of the match despite an impressive attacking line.

After Montpellier took the lead from a corner in the first half, the turning point came in the 72nd minute when the hosts were reduced to 10 men. Pedro Mendes was sent off for a foul on Neymar close to the penalty area and received a second yellow card. The Brazil star, who lost possession 32 times in the game, took the subsequent free kick and curled the ball into the top right corner to silence the home fans.

The goal boosted the visitors' morale and PSG demolished Montpellier’s solid defence in less than 10 minutes. Following his superb free kick, Neymar turned provider two minutes later, setting up Mbappe down the left with a through ball. The World Cup winner fired a precise low shot past goalkeeper Geronimo Rulli.

Icardi sealed PSG’s win at the conclusion of a fast counterattack. Perfectly set up by Neymar, Mbappe found himself alone on the left of the area. With the outside of his foot, Mbappe sent in a precise cross for Icardi, who volleyed the ball into the net.

The win extended PSG's lead at the top of the table to eight points over second-place Marseille.

PSG lost two important players as defender Presnel Kimpembe was forced off in the 19th with an apparent leg injury as he tried to recover the ball from Damien Le Tallec. That was only five minutes before coach Thomas Tuchel brought in Tanguy Kouassi in place of the injured Idrissa Gueye.

Montpellier imposed a high pressing game but failed to break through until Leandro Paredes inadvertently hand balled into his own net from Montpellier playmaker Teji Savanier’s corner in the 41st.

"The pitch is very difficult, here, the crowd is very hostile and they play very well,'' PSG coach Thomas Tuchel said. ‘’It's a great result."

Following a poor start, Monaco increased the pace after the hour mark to secure a 3-0 win over struggling Amiens.

France international Wissam Ben Yedder broke the deadlock with a right-footed volley in the 61st minute, Guillermo Maripan made it 2-0 and Keita Balde completed Monaco's second consecutive win. That lifted the Principality club to ninth place, 15 points behind PSG.

Forward Mbaye Niang scored a goal in each half as Rennes moved to fourth place with a 2-1 win over Angers.

It was the third straight win for Rennes, which has a game in hand.