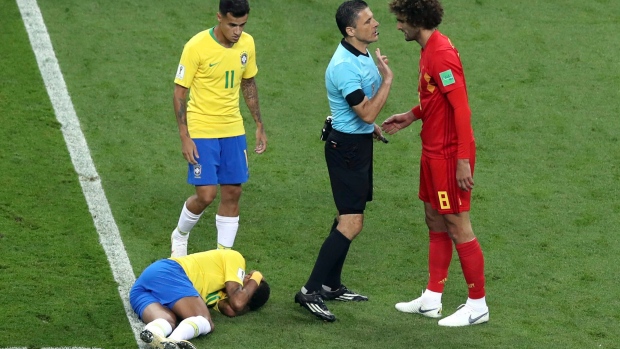 SAO PAULO — Neymar said he isn't upset with critics who have made fun of his apparent theatrics during the World Cup in Russia.

At an auction Thursday organized by Neymar Jr. institute, the striker appeared in public for the first time since Brazil was eliminated by Belgium in the World Cup quarterfinals.

Earlier Thursday, the Brazilian posted a video on Instagram like many others poking fun at his exaggerated reactions after being fouled during the World Cup.

"I was joking (in the social media video). Since everybody is hoping on the bandwagon, I take it as a joke. I am not upset," the Paris Saint-Germain striker told Fox Sports before the auction.

In the short video, Neymar is surrounded by children who fall after he gives them a sign. "It was just a moment I was with the kids and I decided to do it," the striker said.

Fans, players and former soccer stars criticized the Brazilian for his overacting on the pitch in Russia, including a tearful moment at the end of the 2-0 win against Costa Rica and a lot of rolling after being fouled by adversaries.

His advocates, however, say the 26-year-old needs to be more protected by referees against constant and aggressive fouling from adversaries, and that his reactions are not as important.

Neymar also said "the grief is over" after Brazil's World Cup elimination.

The Brazilian also praised his Paris Saint-Germain teammate Kylian Mbappe, who won the World Cup with France at age 19.

"He is a phenomenon, a great player. We knew that from our day-to-day with him. I am very happy he played such a great World Cup," Neymar said. "I speak to Mbappe almost every day. I congratulated him for the title. It will be great to welcome him back as a World Cup champion."