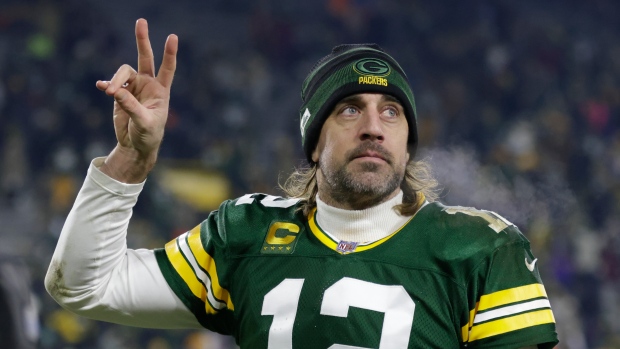 The addition of an extra game this season led to more drama. The playoff picture in the NFC wasn't decided until the final whistle of the Los Angeles Rams - San Francisco 49ers game, which saw the 49ers break the hearts of New Orleans Saints' fans and punch their ticket to the playoffs.

Now that the field is set, we have Aaron Rodgers sitting back this week and watching as the rest of the conference battles it out to make the Divisional Round.

Is this the year Rodgers and company get over the hump after not winning a Super Bowl in more than a decade? Can Tom Brady find his way to his 11th Super Bowl? Is this the year a young Kyler Murray leads the Arizona Cardinals franchise back to the promised land?

Your guess is as good as mine, so let's dive into the NFC playoff picture.

So much for Aaron Rodgers’ off-season comments about being unhappy and wanting out of Green Bay.

Reports ran wild during the NFL draft that the star quarterback was going to force his way out of town before this season, and when that didn’t end up happening, everyone pointed to their 38-3 loss to start the season as a sign of things to come.

But Rodgers had something much different in store.

Green Bay rebounded to win seven consecutive games, with wins over four playoff teams and saw their win streak come to an end with Rodgers out of the lineup in a 13-7 loss to the Kansas City Chiefs.

The team went 13-2 this season in weeks where Rodgers played the entire game and enter the playoffs as the odds-on favourite to win the Super Bowl.

However, the postseason hasn’t been friendly to this franchise over the last decade.

Can you believe it’s been 11 years since Rodgers won his only Super Bowl?

Since their Super Bowl win in the 2010 playoffs, Green Bay has made the postseason eight times; they've won multiple games just once in those eight attempts.

The losses have come in spectacular fashion as well.

In 2019 they allowed 285 yards on the ground to the San Francisco 49ers, 2016 were boat raced 44-21 by the Atlanta Falcons. In 2015 Rodgers extended the game with an incredible Hail Mary to Jeff Janis, only to lose in overtime, and in 2014 they led 19-7 with just over two minutes to play in the NFC Championship game before Russell Wilson and the Seattle Seahawks pulled off a miraculous overtime win.

Last season, the Packers’ year came to an end when head coach Matt LaFleur decided to kick a field goal down eight points on a fourth and goal in the championship round against the Tampa Bay Buccaneers with just over two minutes to play.

The Bucs would get the ball back and run out the clock to advance to the Super Bowl.

Is this the year Green Bay once again gets over the hump? Or will it end in heartbreak like we’ve become accustomed to seeing.

What an interesting season it has been for the defending Super Bowl champion Buccaneers.

Despite losing wide receiver Chris Godwin in Week 15, and only having Antonio Brown active for seven games this season, Tom Brady managed to lead this team to 13 wins and the league’s second-best passing offence.

Brady, 44, averaged a career-best 312.7 passing yards per game this year and led the league in completions, attempts, passing yards and touchdowns.

Since losing Godwin to injury, the team has looked fine, averaging 33.66 points per game in the final three games of the season.

However, those scores were put up against the lowly Carolina Panthers (32, 41) and the awful New York Jets (28).

With Godwin and Brown out of the picture, look for Rob Gronkowski to get some more action.

The tight end has started 20 playoff games with Tom Brady as his quarterback, and has 89 receptions for 1,273 yards and 14 touchdowns in those games.

Last year he caught eight passes for 110 yards and two touchdowns in the playoffs en route to his third Super Bowl win.

Aside from Brady, Tampa Bay’s defence was a big story in their Super Bowl win last season.

The defence became the first to knock off three former MVP winners in the same postseason run and allowed just 19.5 points per game.

This year they once again have a top defence that could be the difference maker.

However, I question if Brady has enough playmakers around him to repeat as Super Bowl champions.

At the start of the season I took out my typewriter and told the world Matthew Stafford had some great value to win MVP at his pre-season odds of 18-1.

And eight weeks into the season, I looked like a genius.

And then… I don’t know what happened.

After opening the season with a 22-4 touchdown to interception rate, Stafford took the field in Week 9 for Sunday Night Football and just melted under the bright lights.

He threw two interceptions that night, both deep in his own territory and one being a pick-six.

And he followed it up with another two, including another pick-six the following week.

Stafford, after turning the ball over just three times in his opening eight games, ended the season with 13 interceptions and 15 turnovers in his final nine.

Yes, Cooper Kupp was the best wide receiver in the league this season.

And Odel Beckham Jr. appears to be fitting in perfectly with this Rams team, and they have the playmakers on defence that can totally flip a game on its head.

And yes, I have a ticket on the Rams to win the Super Bowl at +2800 that I placed after the Jared Goff trade in the off-season.

But at the end of the day, I’m having a very hard time trusting Stafford – 0-3 lifetime in the playoffs – to quarterback this team to much success this season and think they could get bounced in Round 1.

I wasn’t alive the last time the Dallas Cowboys advanced past the divisional round.

Since 1997, the year I was born, the Cowboys have made the playoffs nine times. They’ve managed to win just three times in those nine appearances.

Dak Prescott, now in his sixth season, has looked better than ever in his return from his season-ending ankle injury in 2020.

He managed to throw for 4,449 yards and 37 touchdowns with just 10 interceptions in 16 games this year.

On the ground, Dallas has established a lethal one-two punch with Ezekiel Elliot and Tony Pollard combining to rush for 1,721 yards and 12 touchdowns this season.

At wide receiver this team is loaded with three playmakers that can make an impact one any given play.

CeeDee Lamb led the team with 120 targets and 79 receptions, but it was Amari Cooper’s eight touchdowns that led Dallas’ wide receiver room and tight end Dalton Schultz had an impact on this offence the entire season.

Schultz was sixth among tight ends this season with 808 receiving yards and his eight scores ranked fifth among NFL tight ends.

On defence, Dallas allowed the seventh-fewest points this season, and their 34 turnovers forced led the league.

In the opening round, they’re taking on a 49ers team that has only allowed 18.1 points per game since Week 10.

If the Dallas defence can hold serve in the opening round of the playoffs and lead them to an opening round win, I might experience something for the first time – a Cowboys playoff run.

Is this finally the year for America’s Team?

I like this year’s Dallas Cowboys team. I think they’re a good team with a bad coach and against most teams, they’ve proven they have the talent to overcome their poor coaching with rare talent.

But I fear how they match up against this 49ers team.

I circled the 49ers at the start of the season as a team with good value to win the Super Bowl.

And while they haven’t exactly been worldbeaters, I think they’ve shown their own ability to rise up in big moments and win big games.

No game this season was bigger than their Week 18 meeting with the Rams.

It was a game where they trailed by 14 at the half and clawed back to win 27-24 in overtime and punch their ticket to the playoffs.

Deebo Samuel was a solid player in his first two seasons, but he’s emerged as a flat out superstar this season.

Alongside Samuel, tight end George Kittle is a force to be reckoned with.

Kittle had 910 receiving yards in 14 games this season and his ability to open up holes in the run game with his blocking makes him one of the best tight ends in the league.

The defensive unit allowed the third-fewest yards this season, and has forced a turnover in 11 of their last 13 games.

Since Week 10, this team has gone 3-1 against playoff teams.

While I worry about the ceiling of this offence under Jimmy Garoppolo, we’ve already seen him manage this franchise to a Super Bowl appearance before.

And I'd like the value at +1200 for this team to reach this Super Bowl, if it weren’t for the next team on this list.

In his third NFL season, Kyler Murray has led the Cardinals to the playoffs for the first time since 2015.

And their path to the Super Bowl is an interesting one for a team this low on the board.

Arizona will take on a team they know all too well in the opening round of the playoffs.

A Los Angeles Rams team that is 5-1 against Murray in his career.

But you already know how I feel about Matthew Stafford in this postseason, and I think the Cardinals will be the team to benefit from his poor play this time of year.

If Arizona is able to escape the first round, watch out.

A Cardinals defence that has looked good at times this season is expected to get JJ Watt back for the postseason, and is it possible we see DeAndre Hopkins back on the field if they make a deep run?

For me, +1200 is a very intriguing number, because we’ve seen this team string together wins this season.

Just two weeks ago, we watched them march into Dallas as nearly a touchdown underdog and win outright.

In fact, they matched up with an NFC playoff team six times this season and went 4-2 in those games.

Is it a sure thing? Nope.

Could they get bounced in the first round? Yup.

But if they catch fire and you’re sitting on Championship weekend with Arizona +1200 to make the Super Bowl, you’ll have a ton of value.

What a weird season it’s been in Philadelphia.

After almost refusing to run the ball the first seven weeks of the season, the Eagles flipped their 2-5 start into a 9-8 season that saw them clinch a wildcard spot in Week 17.

“It’s crazy, we ran the table and get to rest starters in Week 18. I can’t believe this,” my good Eagles friend said to me after their 20-16 win over the Washington Football Team.

But, sadly, a meeting with the Tampa Bay Buccaneers could mean trouble for this team.

Only two teams this season gave up fewer yards than the 1,573 rushing yards Tampa Bay allowed this season, and if the Eagles are unable to move the ball on the ground I’m not sure I trust Jalen Hurts as a thrower against this defence in a playoff game.

Nonetheless, I think the game could go a long way in terms of development for this team.

It’ll give someone like Hurts an opportunity to experience the playoffs, and come back stronger next year.