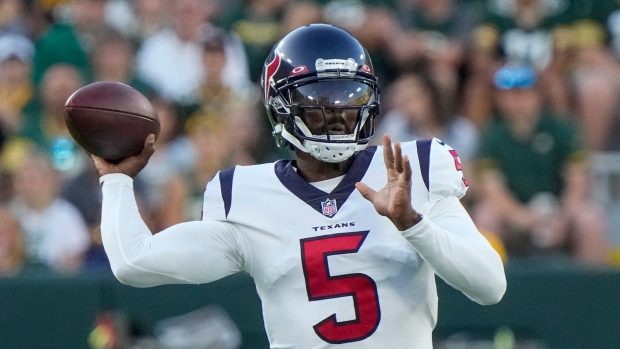 Week 12 in the NFL kicked off with another strong performance from road teams on Thursday.

The visitors went 3-0 straight up and 2-1 against the spread on U.S. Thanksgiving Day.

Road teams have covered at nearly a 59 per cent clip this season, which is on track to be the highest mark in the Super Bowl era.

In fact, home teams are currently on pace to finish below .500 outright for just the second time since the 1970 merger.

Will those trends continue on Sunday?

Here are some of our best bets for Week 12 in the NFL.

I’ll roll the dice with a road team getting points in what projects to be a favourable matchup as my best bet for Sunday.

The 49ers have lost nine straight games as a home favourite.

Per ESPN Stats & Info, that’s the longest losing streak as a home favourite in the Super Bowl era.

Kyle Shanahan is just 3-16-2 ATS as a home favourite in his career, which is the worst mark by any coach in the Super Bowl era with a minimum of 15 games.

Now Shanahan and the 49ers will face a Minnesota side that is 5-1 ATS as an underdog this season.

The Vikings have covered four straight on the road, including a 34-31 overtime loss to the Baltimore Ravens in Week 9 and a 27-20 win over the Los Angeles Chargers in Week 10.

Coming off an impressive 34-31 win over the Green Bay Packers last week, Minnesota is right back in the NFC playoff hunt despite a pretty tough schedule to date.

Plus, they can’t afford to take their foot off the gas with several teams in the NFC playoff mix, including the 49ers.

At the very least, the Vikings should be able to cover as a three-point road dog.

It’s not often lately you get a chance to tout the Houston Texans in a favourable spot. It’s even less common to be able to back Houston as a favourite. The Texans are giving points for the first time all season on Sunday, when they host the New York Jets.

Houston is fresh off a convincing upset win over Tennessee in a game they flat out dominated. They jumped out to a 19-0 lead before cruising to victory, and made a mockery out of the Titans offence.

The Texans sacked Ryan Tannehill twice, and forced five turnovers, including four interceptions. Before you chalk that up to an outlier performance, this was actually the second straight week Houston racked up five turnovers.

Now they get to face the Jets, the 31st-ranked team per DVOA. New York will get Zach Wilson back under centre, which is great news for Texans’ backers. Wilson has the second-lowest passing grade among starting quarterbacks per Pro Football Focus, and has produced the highest percentage of turnover worthy throws in the NFL.

On the other side of the ball, Tyrod Taylor will make his third straight start, and Houston is a much more competent team with him leading the offence. In games that Taylor has started this season, the Texans are 2-2 straight up, and 3-1 against the spread.

The matchup couldn’t be any more favourable for Taylor and Co. as New York ranks last on defence per DVOA, and are yielding a league-high 32 points per game.

Lamar Jackson has started five games against the Cleveland Browns in his NFL career.

Yup, in four of his five starts against Cleveland the Baltimore Ravens quarterback has gone over this rushing prop and he’s done it averaging 6.74 yards per carry.

On top of that, the Browns have allowed at least 160 rushing yards against in their last two games.

Jackson, despite throwing the ball much more this season than years prior, has used his legs frequently and efficiently in prime-time games this year.

The 24-year-old quarterback has rushed 37 times for 232 yards in just three prime-time games.

After missing last week due to an illness, I expect Jackson to enter this Sunday Night Football game fresh and ready to run all over a franchise he has dominated in his young career.

I’ll have my popcorn ready Sunday night as he runs over this rushing prop.