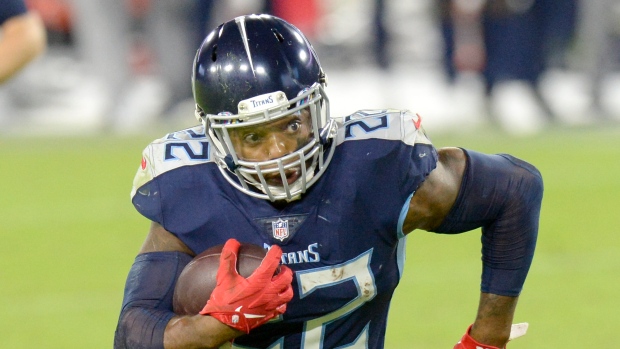 The best weekend of football is upon us.

The NFL Divisional Round kicks off on Saturday with the No. 1 seed Tennessee Titans a 3.5-point favourite at home against the Cincinnati Bengals.

This will be the first time all season Tennessee has had all 22 of its starters healthy, and will mark the return of star running back Derrick Henry.

King Henry hasn’t played since suffering a foot injury in Week 8, but his return elevates the entire Titans’ offence, not just the run game.

The Titans consistently face eight or more defenders in the box with Henry in action because teams are so worried about getting burned by him. That’s where Tannehill shines. He posted the NFL’s best passer rating versus eight-man boxes from Weeks 1 through 8, averaging 9.8 yards per pass attempt.

The @titans need to come out throwing on 1st down-the @bengals will have an extra guy down near the ball to try and stop the run-be aggressive-because while Cincy doesn’t blitz often-they do it well! #NFLLIVE pic.twitter.com/HyIOW8J2oK

When Henry does get the ball on Saturday though, his outlook is strong. Cincy boasts an average run defence at best, but is dealing with numerous injuries to its defensive line. The Bengals yielded 7.4 yards per rush against Las Vegas on Wild Card Weekend, and if the Raiders can find that kind of success imagine what the two-time rushing champ will be able to do.

Derrick Henry is expected to start tomorrow vs the Bengals, per @TDavenport_NFL

Henry’s presence is key to a deep playoff run, but so, too, is a healthy A.J. Brown and Julio Jones. The Titans average seven yards per play when all three are on the field this year, but just five yards per play when at least one is out. An extra two yards per play makes a huge difference considering Tennessee averages 67 plays per game.

More yards equals more points, so it’s no surprise the Titans average a full touchdown more in games where all three of Henry, Brown, and Jones are healthy.

Cincinnati has won each of Joe Burrow’s past four starts, but despite the success there’s reason to think the Bengals offence could underwhelm in this contest.

They managed just six points in the second half of last week’s tilt with Las Vegas, and Tennessee plays a similar style of defence as the Raiders. They don’t give up big plays, and they create pressure without blitzing.

The Titans ranked 10th in sacks this season despite blitzing at the league’s fifth-lowest rate. Burrow has eviscerated blitz happy opponents, but has had floor games against teams that prefer to drop back and play coverage – last week’s game versus Las Vegas is a perfect example.

Burrow put up good, but not great numbers. He threw for 244 yards and two scores, but averaged nearly two yards less per pass attempt than in the regular season.

Versus the blitz this season, Burrow completed 70.5 per cent of passes, averaging 10.8 yards per throw. When facing no pressure, his yards per pass attempt dips to 8.2 yards, and his TD rate drops by nearly three per cent.

The Titans grade out as a top-12 defence per DVOA, and allowed 19 or fewer points in four of their final regular-season games.

Is there a coach in the NFL more underrated than Mike Vrabel? Only the New York Giants lost more man games due to injury this season than the Titans, but while New York finished as the NFC’s second-worst team, Tennessee won the AFC.

.@Titans HC Mike Vrabel keeping it real: It’s not just a game. This is more than just a game, it’s an opportunity. pic.twitter.com/99hNuoVJCk

With this being the first game the Titans have had all their starters healthy for, there’s a good chance we still haven’t seen how good they can be.

Back to Vrabel. Give him time to prepare and chances are he’s going to lead Tennessee to a victory. In eight games with eight or more days to prepare as a head coach, Vrabel’s Titans are 8-0 both straight up and against the spread.