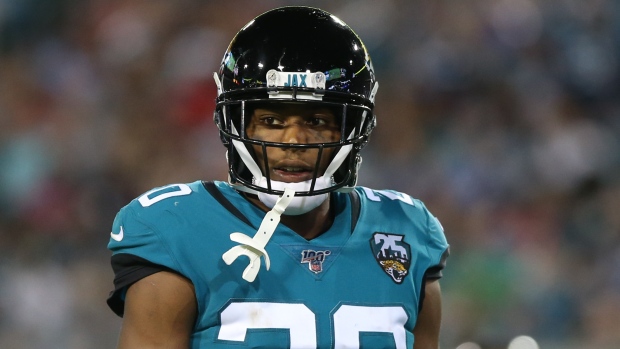 The latest news and injury reports ahead of Sunday's games for Week 7 in the NFL.

Jalen Ramsey is set to make his Rams debut in a revamped secondary against Julio Jones and the Atlanta Falcons.

Ramsey, the former All-Pro cornerback acquired by Los Angeles in a trade with Jacksonville on Tuesday, is active and expected to be matched up against Jones. Ramsey practiced with the Rams on Thursday and Friday after missing the past three games with the Jaguars because of a back injury.

Receivers Marquez Valdes-Scantling and Geronimo Allison are both active for the Green Bay Packers for Sunday's matchup against the Oakland Raiders.

Report: Trubisky to play vs. Saints

Chicago Bears QB Mitchell Trubisky, listed as questionable for Sunday's game against the New Orleans Saints due to a shoulder injury, will play, according to a report from ESPN's Adam Schefter.

Bears’ QB Mitchell Trubisky, listed as questionable for today’s game against the Saints due to a shoulder injury, will play, per sources.

Trubisky missed the Bears' last game against the Oakland Raiders in London in Week 5. Chicago was on a bye week last week.

Howard expected to play vs. Bills

The Miami Dolphins should have star cornerback Xavien Howard when they take on the division rival Buffalo Bills Sunday. Howard, listed as questionable with a knee injury, is expected to play against the Bills, per Rapoport.

#Dolphins CB Xavien Howard, questionable with a knee injury in their game against the #Bills, is expected to play today, source said.