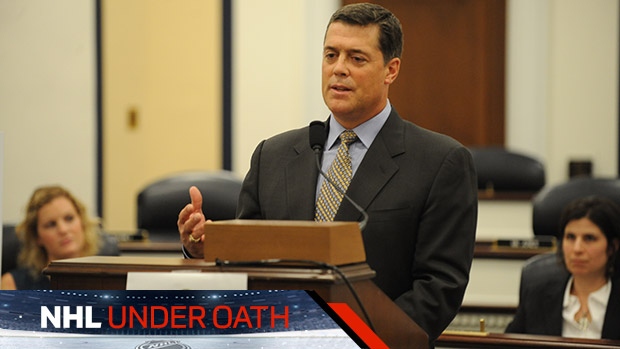 When the National Hockey League announced in late 2011 that Hockey Hall of Famer Pat LaFontaine would star in a weekly documentary called Making of a Royal about his coaching of a Midget rep hockey team, the league promised an “unprecedented” series with behind-the-scenes footage.

The 24-part series about the Long Island, N.Y., Royals was shown on the NHL Network, NHL.com, and the NHL’s YouTube channel.

Six days before that five-minute Making of a Royal episode was posted on YouTube on Dec. 16, 2011, NHL vice-president of media relations Frank Brown ordered NHL video producer Ryan Bader to remove a section of LaFontaine’s comments about concussions.

“Once you get a concussion you are four to six times more likely to get another one – and it’s probably exponential from there,” LaFontaine said in a clip that was dropped from the show.

It wasn’t the only clip Brown asked to have removed.

“The closing quote from Pat LaFontaine about ‘A lot less mothers and fathers cringing, wondering when’s the next ambulance going out…’ MUST go,” Brown wrote in a Dec. 10, 2011, email to Bader.

Meagher’s deposition was among more than 30 held in connection with the NHL concussion lawsuit, filed in a U.S. federal court in Minnesota in 2013.

Brown wasn’t deposed in connection with the NHL concussion lawsuit and Meagher said he didn’t know why his colleague demanded changes to the video.

“Why would Frank Brown from your communications group want that to be deleted from a video that was being produced by the NHL?” plaintiffs’ lawyer Mark Dearman asked.

“I don’t know the answer to that,” Meagher said.

Former NHLer Brendan Shanahan, then director of player safety for the league, also appeared in episode nine of Making of a Royal.

Brown also asked for an edit of Shanahan’s interview clips.

At one point, Shanahan said, “There’s a tremendous amount of peer pressure if you’ve got a banged up shoulder or a banged up knee, it’s sort of like, ‘Look, your ankle will heal over the summer, get through this, for us.’ But I think when there’s a head injury, the brotherhood wants to come together and protect the guy with that head injury.”

Brown ordered Bader to cut the rest of Shanahan’s quote where he said, “This might not end over the summer … it might affect him for the rest of his life … might end his career.”

Brown wrote, “THE FOLLOWING MUST BE DELETED” about another clip of the video that showed Shanahan on the ice in an NHL game “looking up/dazed.”

All professional sports leagues and companies, of course, are in the business of trying to shape a favourable opinion in the public eye. And yet with a high-profile concussion lawsuit being argued in a U.S. federal court, that is especially so for the NHL, whose executives paid close attention to the LaFontaine series to remove any commentary that might be considered negative or controversial.

The depositions show that the league’s efforts to gauge and help shape public and media opinion about issues such as fighting, head hits and violence in hockey were ongoing long before the concussion lawsuit was filed.

Meagher testified that monitoring of the media’s coverage of the NHL is handled by a 15-person communications staff working in offices in Toronto and in New York.

During meetings with NHL team owners and general managers, the NHL’s public relations department has made presentations about public attitudes regarding violence in the sport.

During one such meeting in March 2010 with NHL general managers, public relations staffers shared that an independent poll found 80 per cent of Canadian fans believe hits to the head in pro hockey were “getting out of hand.”

League executives have similarly been tuned in to how teams promote and market fighting in games and how fans have responded to violence in hockey.

According to a PowerPoint presentation made Meagher during a March 9, 2009, general managers’ meeting, “There is apparent marketing and or additional multimedia in more than 5 per cent of the fights in our [NHL] game. Examples In-Arena: Boxing bells are rung before the first punch is thrown. Drum/cymbals sound every time the home player lands a punch. Typical songs – Bloody Sunday (U2), We Salute You (AC/DC), Raise a Little Hell (Trooper), Eye of the Tiger (Survivor), Fight for Your Right (Beastie Boys).”

According to NHL statistics, there were 734 fights during the 2008-09 NHL season. Five per cent of those would represent about 36 fights.

On Oct. 29, 2011, about two months after Wade Belak died, making him the third NHL player in three months to have died prematurely, Bernadette Mansur, then an executive in the NHL’s PR department, sent an email to NHL commissioner Gary Bettman, Meagher and Brown. The email was titled “NHL Community Charitable Associations and messaging.”

“Because of the recent player suicides and deaths we are now considered the poster child for mental illness,” Mansur wrote.

Meagher’s deposition also highlighted the NHL’s decisions about what information to disclose to the media and public and what the league tries to avoid sharing publicly.

In February 2011, Willem Meeuwisse, an NHL medical consultant, reviewed an internal NHL spreadsheet that showed a number of NHL players had returned to the same games in which they had suffered concussions.

“WOW,” Meeuwisse wrote in a Feb. 18 email to Meagher, NHL senior vice-president of hockey operations Kris King, and NHL lawyer Julie Grand. “That is a completely different picture than we get from the injury data.”

“I think we should keep this new spread sheet very tight to this group going forward,” King wrote in his Feb. 22, 2011, email. “Does anyone disagree? This information in the wrong hands would not be a good thing in my opinion. Looking for comments or advice.”

“Totally agree re your point below,” Grand responded.

In another email about the issue, Meeuwisse wrote Meagher, “This is a pretty big deal from a clinical perspective. We think players who continue to play after the hit get a worse injury …”

Meagher was asked about that exchange during his deposition.

“Do you know why Kris is telling you we should keep this spreadsheet very tight?” plaintiff lawyer Mark Dearman asked.

“I do not,” Meagher answered.

“… Do you get a lot of emails where somebody like Kris King or somebody else at the NHL is saying, if this gets into the wrong hands it wouldn’t be a good thing. Do you agree or disagree?” Dearman asked.

“I don’t know how many of those emails I might have received,” Meagher said.

The NHL’s public relations and marketing departments have a mandate to monitor and shape the public image of the league, and there is evidence that the league may, in some instances, bow to that public opinion.

In 2005 the NHL introduced new instigator rules for players who fight and who are repeat aggressors. For instance, a player who receives his third instigator penalty in one season is automatically suspended for two games.

Two years later, Burke, then the general manager of the Anaheim Ducks, wanted to increase the number of instigator penalties a player could receive before being suspended.

His suggestion was refused and he blamed that failure on the media, according to emails discussed with Burke during his Aug. 19, 2015, deposition in New York.

“The media have goaded the NHL into this,” Burke wrote in an Oct. 24, 2007, email to Colin Campbell. “They will continue to goad you to raise the bar again. Then they will [expletive] kill us when we have totally removed hitting from the game and our buildings are half full and our ratings are even worse than they are now, if that’s even possible.”