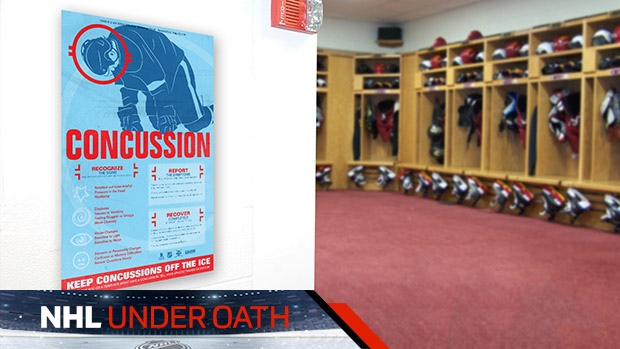 A medical consultant to the National Hockey League Players’ Association has testified under oath that a top NHL lawyer watered down a warning to players about the long-term dangers of repeated head trauma on a poster displayed in every NHL team dressing room.

The union ultimately went along with the NHL’s request in order to move along the process of getting a poster done, according to Dr. John Rizos’ Aug. 12, 2016 testimony in the landmark concussion lawsuit against the league.

The behind-the-scenes glimpse into the evolution of the NHL’s head injury warning poster is found among the 31 NHL concussion case court depositions from 2015 and 2016 obtained by TSN.

After several years of discussion, the league and union agreed in September 2013 to produce and display a blue and red poster about concussions, advising players to recognize the signs of head injuries, report their symptoms, and to make sure they recover completely before returning to play.

The posters – written in English and the approximate size of a magazine cover – are still displayed in locker rooms throughout the league, NHLPA spokesman Jonathan Weatherdon confirmed.

“Each club was instructed to place the concussion education poster in the NHL club’s home, practice and visiting club’s dressing rooms,” Weatherdon wrote in an email to TSN.

The Montreal Canadiens posted the warning poster in both English and French.

NHL teams were also instructed to distribute translated versions “as appropriate” to the players, Weatherdon wrote, adding that the NHLPA has the posters in eight languages available on the union’s secure website.

The NHL’s in-locker room warning in 2013 came three years after the National Football League began distributing its own poster advising players of the potential consequences of concussions.

The NFL’s poster asserts that repeated head trauma may lead to dementia and early onset of dementia. The poster also advises players that repeated concussions “can change your life and your family’s life forever.”

The NHL went in a different direction.

Posters hung in NHL locker rooms do not include the word “dementia.” The NHL posters also don’t include the warning issued by the NFL to its players that repeated head trauma could lead to permanent brain damage.

According to the testimonies of an NHL lawyer and a league medical consultant, as well as that of an NHLPA medical consultant, an NHL doctor worried about using too many words on the poster because of the growing percentage of foreign players in the NHL and so-called cultural differences.

The NHL/NHLPA Concussion Working Group first began discussing the prospect of a warning poster on Aug. 6, 2010 – about three months after the NFL released its bluntly worded version, according to a copy of meeting minute notes.

During a deposition in Toronto, Dr. Rizos was asked about the poster’s evolution.

He testified that he initially used wording borrowed from the U.S. Centers for Disease Control and Prevention (CDC).

Under the heading, “What Should I Do If I Think I’ve Had A Concussion,” an early draft of the poster read into the court record of Dr. Rizos’ deposition included the warning that traumatic brain injuries “can cause a wide range of short or long-term changes affecting thinking, sensation, language or emotions. These changes may lead to problems with changes in memory and communication, personality, as well as depression and the early onset of dementia.”

By the spring of 2012, the NHL had problems with the union’s proposed poster.

NHL lawyer Julie Grand, who is a member of the NHL/NHLPA Concussion Working Group, wrote in an email to Dr. Rizos that she had discussed the draft version of the poster with league doctors Ruben Echemendia and Willem Meeuwisse and that she had concerns about including the CDC’s warning.

Grand, who was deposed in connection with the concussion lawsuit but not asked specifically about the poster’s creation, wanted to take out the word dementia according to Dr. Rizos.

In a May 2012 email to Dr. Rizos, Grand wrote she had “a few concerns with the way it is now written.”

She wrote, “I think the written statement seems alarmist and seems to suggest that the consequences listed could result from having one concussion.”

“That is watering it down, isn’t it?” Cashman responded.

“I would with this in view, I would say this is watering it down,” Dr. Rizos said.

Dr. Rizos later testified about why the NHLPA agreed to the NHL’s request.

“What I see and my initial impressions are that we came up with compromises with language that was acceptable to all parties in order to move the process along,” Dr. Rizos said.

Dr. Meeuwisse explained in a July 15, 2016, deposition why the word dementia was eliminated from the NHL poster.

“The objective was to make the message simple and clear and define as to its scope,” he said.

Dr. Echemendia was asked in a June 22, 2015, deposition why the NHL poster didn’t include a warning about permanent brain damage.

“I do not know the specific reason for why it does not,” he said.

Dr. Echemendia added, “…A part of the problem that we face in the NHL that the NFL does not face is a language issue, where half of our players speak a language other than English.”

Dr. Frank Conidi, chief of the Florida Center for Headache and Sports Neurology and the former team neurologist for the Florida Panthers, said in an interview with TSN that he believes the warning poster was watered down because the NHL sensed a lawsuit by former players would be filed.

“The editing of the poster is insulting,” Dr. Conidi said. “The thing that comes to my mind is: That’s the best you can think of? I think I would have said, ‘I don’t know’ before I said, ‘My players don’t speak English.’ These players get to and from NHL rinks okay and read English street signs and live in North America. There are a number of very intelligent hockey players and I think many would be offended that these guys are basically saying the players aren’t smart enough to read the poster.”