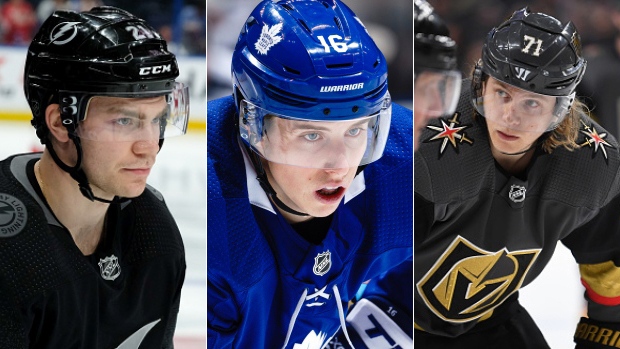 It's been six years since a restricted free agent last signed an offer sheet and more than a decade since one went unmatched, but Jared Clinton of The Hockey News believes four RFAs this season could at least end the offer sheet drought.

Clinton believes Mitch Marner, Kasperi Kapanen, Brayden Point and William Karlsson could all be offer sheet targets this season with their respective teams already up against the projected $83 million salary cap.

TSN Hockey Insider Darren Dreger said earlier this week he expects Marner's camp to at least hear out other teams ahead of July 1 and opined the Toronto Maple Leafs would have to make an offer with an average annual value above $10 million over the next month to keep him from doing so. Clinton suggests that the New Jersey Devils and Carolina Hurricanes have the cap space to make Marner an $11 million per year offer, which would net the Maple Leafs a return of four first-round picks if unmatched.

Clinton notes Kapanen could be a target since a team would have to send the Maple Leafs only a second-round pick if he's signed to a deal under $4.227 million.

Karlsson did not match his 43 goals from 2017-18 this past season, but still managed to post 24 goals and 56 points as the Vegas Golden Knights top-line centre. The Golden Knights are currently over the projected $83 million cap for next season and are expected to try to clear space in June, but Clinton believes a $6.5 million-$7 million offer sheet to Karlsson would be difficult for Vegas to match. His question, is whether Karlsson is worth the first-, second-, and third-round picks a team would have to give up in exchange.

Like the Maple Leafs and Golden Knights, the Tampa Bay Lightning are also up against the cap and Clinton expects Point to command at least the team's remaining $8.5 million on a projected $83 million cap this summer. Point, 23, scored 41 goals and posted 92 points this season and Clinton believes Point could fit on "nearly any team's top line." He suggests a rival team could "put the screws" to Tampa Bay by offering Point $9 million per year, in an offer that would be matched but cause the Lightning to spend more than they planned.

Offer sheet compensation has been set for 2019/20

It appears there's a good chance Jeff Skinner will be staying with the Buffalo Sabres.

According to TSN Hockey Insider Bob McKenzie, talks between Skinner and general manager Jason Botterill have increased during the NHL scouting combine this week in Buffalo. McKenzie adds "it's very close," but a deal is not quite done yet.

"Ralph Krueger, the new head coach of Buffalo, has spent some time with Skinner, extolling the virtues of his program and what they think it's going to be," McKenzie said while on the NBC Sports Network. "Buffalo certainly wants him back and Skinner would like to come back, but they just have to [iron out the details] to the point where both sides are happy. It's very close, but it's not done, and until it's done, it's not done."

McKenzie added that he believes the contract would most likely be more eight years somewhere around $8.5 million to $9.5 million per season.

"For quite some time now, I've been saying that I think the sweet spot for a number is an eight-year deal somewhere between $8.5 million per-year and $9.5 million per-year," McKenzie said. "Obviously Skinner would like to get on the high side of that. He wants to try to get a deal in the $9 million range. The Sabres would like the deal to try and be in the $8 million range. We'll see if they can come up with a number that works for both of them."

The 27-year-old scored a career-high 40 goals with 23 assists over 82 games with the Sabres in 2018-19, his first season in Buffalo after being acquired from the Carolina Hurricanes last summer.

Skinner is currently scheduled to become an unrestricted free agent on July 1.

The Winnipeg Jets re-signed backup goaltender Laurent Brossoit on Wednesday, which Ken Wiebe of The Winnipeg Sun writes could signal the end of Eric Comrie's time with the franchise.

Wiebe writes that Comrie, a restricted free agent this summer, will not be waiver-exempt next season and the Jets will have to consider trading him no rather than risk losing him for nothing in the fall.

Comrie posted a 25-20-2 record with the AHL's Manitoba Moose this season with a .917 save percentage and a 2.69 goals-against average. He appeared in one game with the Jets, allowing five goals on 28 shots in a loss to the Minnesota Wild.

The 23-year-old has spent the past four seasons with the Moose, posting a save percentage of .915 in each of the past two seasons. He selected by the Jets in the second round of the 2013 NHL Draft.

Phil Kessel has already turned down a potential trade from the Pittsburgh Penguins this off-season and NBC Sports' Jeremy Roenick believes he could reject more in the future.

Roenick told WGR 550 in Buffalo on Wednesday that Kessel, who has an eight-team approved trade list in his contract, has only one destination he wants to move for.

"I know where he wants to go and we’ll see if he gets that option,” Roenick said. “He does want to go west. There is one team that he does want to go play for, and I don’t think he’ll stand for anything less. He’ll stay in Pittsburgh and his contract now and be happy with it or not be happy with it or they’ll trade him to the team that he wants to go to.”

Jonathan Bombulie of the Pittsburgh Tribune-Review believes "it's pretty clear" Roenick was referring to the Arizona Coyotes. The Coyotes have been linked to Kessel previously due to his close relationship with head coach Rick Tocchet, who was previously an assistant in Pittsburgh.

Josh Yohe of The Athletic reported while Kessel was weighing a trade to the Minnesota Wild that the Coyotes are believed to be interested in the 31-year-old winger, but their current ownership situation was holding them from making an offer.