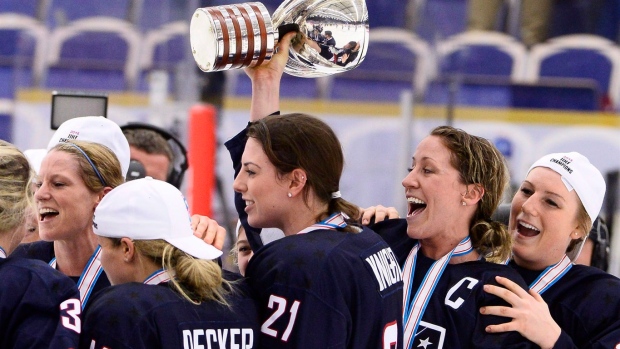 As sports organizations and notable hockey figures express support of the U.S. women's team, several players say they rejected overtures from USA Hockey to serve as replacements for the upcoming world championships.

Two players told The Associated Press on Friday that USA Hockey reached out to them to gauge their interest for the worlds, which begin next week in Plymouth, Michigan.

Brittany Ott, a goaltender for the Boston Pride of the National Women's Hockey League, and Annie Pankowski, a junior forward at the University of Wisconsin, said the email from USA Hockey was not an invitation but rather an inquiry about their availability.

"I responded to that email and I said I'm not willing," Pankowski said.

A third player, goalie Lauren Dahm, told the AP on Saturday she also turned down an invitation. Dahm plays for the Canadian Women's Hockey League's Boston Blades. USA Hockey also reached out to former North Dakota player Samantha Hanson, who turned down the expression of interest.

The U.S. team has said it plans to boycott the worlds over a wage dispute with USA Hockey, which confirmed Thursday it would begin reaching out to potential replacement players. Several players posted messages on social media saying they support the national team and would decline or have declined any outreach from USA Hockey.

"From a personal standpoint, I have never been invited to a USA Hockey series or camp or anything like that, and I would honestly love to be invited to something like that," Ott said by phone. "However, at the current time, this is a fight that I believe in and I'm definitely going to stand up and help fight as much as I can."

Many players posted a version of a Jerry Rice quote on Twitter on Friday: "Today I will do what others won't so tomorrow I can do what others can't. I said no to USAH & will not play in the 2017WC." Not all players who tweeted that message were asked by USA Hockey if they could play.

On Saturday, the NFL Players Association and National Basketball Players Association joined the chorus of support for the players. The NBPA said in a statement it "stands in solidarity with the efforts by the U.S. Women's Hockey Team to secure fair and just treatment for its players."

NFLPA executive director DeMaurice Smith said on Twitter that the organization stands behind their pursuit of fairness and equality.

"These women understand inequality when they see it and are expressing their right to be treated fairly as athletes and workers," Smith tweeted. "Of course, they have the NFLPA's support in daring to withhold their services until a fair agreement is reached."

"I see how hard she's worked to get to the level she's at," he said. "It's a situation that's unfortunate, but hopefully, things get resolved for them and better for the future."

On Friday, the NHL Players' Association and Major League Baseball players posted messages of support. The NHLPA posted on Twitter that it supports players and panned USA Hockey's bid to stock the team with replacements, adding that the decision "would only serve to make relations, now and in the future, much worse."

The MLBPA encouraged all female hockey players to stand united behind their national team colleagues.

Players are seeking a four-year contract that includes payments outside the six-month Olympic period. The sides met for 10-plus hours Monday, but players have called USA Hockey's counterproposal "disappointing."

USA Hockey said Thursday its priority was to have all the players selected for the national team on the ice March 31 when the tournament begins. But the organization added that it informed players' representatives it would begin reaching out to potential replacements with the tournament coming up.

Star national team forward Hilary Knight said last week she wished USA Hockey luck putting together a suitable team of replacements to defend the gold medal because the player pool was united in the dispute. Ott and Pankowski said they had not heard from any players expressing a willingness to play in worlds.

"It's a very unified front," Ott said. "It's a tight-knit community that we have in women's hockey here. This is definitely a big opportunity for us to make a big change and have a big impact on our sport and have it grow. We're all standing together."