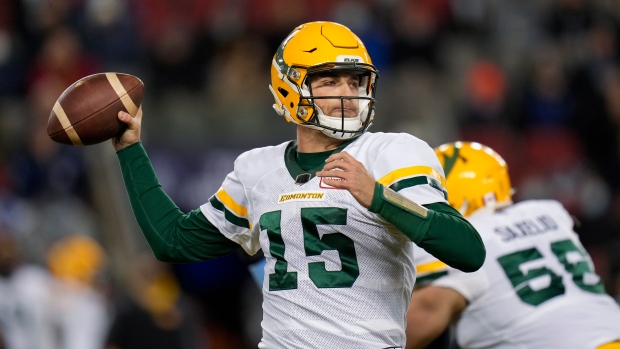 In the wake of Sunday's statement by the CFLPA advising all veteran quarterbacks not to attend this week's voluntary sessions, Edmonton Elks quarterbacks Nick Arbuckle and Taylor Cornelius have been exempt and will participate in rookie camps, reports TSN Football Insider Farhan Lalji.

I’m told that @GoElks were the one club whose vet QBs were given the exemption by @CFLPA. Arbuckle & Cornelius will participate on Wed when rookie camps begin. My understanding is a number of veteran QBs were supportive of the #Elks exemption. @CFLonTSN @TSN_Sports https://t.co/h2hgZVkx7D

"My understanding is a number of veteran QBs were supportive of the Elks exemption," Lalji tweeted.

Arbuckle, 28, was dealt mid-season from the Toronto Argonauts to the Edmonton Elks after finding himself on the bench in favour of McLeod Bethel-Thompson, who led the Argos to the East Final against the Hamilton Tiger-Cats.

A native of Camarillo, Calif., Arbuckle appeared in seven games for the Argos, completing 96 passes for 1,158 yards, five touchdowns and six interceptions. He did not play in the 2021 season for the Elks due to injury.

Cornelius, 26, played in 14 games for the Elks during the 2021 campaign, completing 143 passes for 1,795 yards, nine touchdowns and 13 interceptions and took over under centre after Trevor Harris was dealt to the Montreal Alouettes.

Both quarterbacks will look to compete for a starting role under new Elks head coach Chris Jones.

Rookie camps are slated to begin on Wednesday.