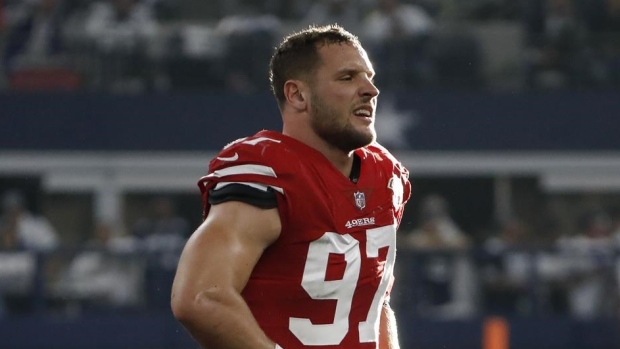 ARLINGTON, Texas (AP) — San Francisco pass rusher Nick Bosa has been ruled out of a wild-card game against Dallas because of a concussion after a collision with teammate D.J. Jones.

Bosa was rushing Cowboys quarterback Dak Prescott from the left side when he was crunched in the head and neck area as Jones came from the other direction late in the second quarter Sunday. Bosa stayed down for a couple of minutes before flashing a thumbs-up as he prepared to leave the field.

The 49ers' sack leader during the regular season went to the locker room before halftime and was ruled out early in the third quarter.

Bosa had 15 1/2 sacks during the regular season and was credited with half a sack of Prescott in the first half. San Francisco was up 16-7 at halftime.