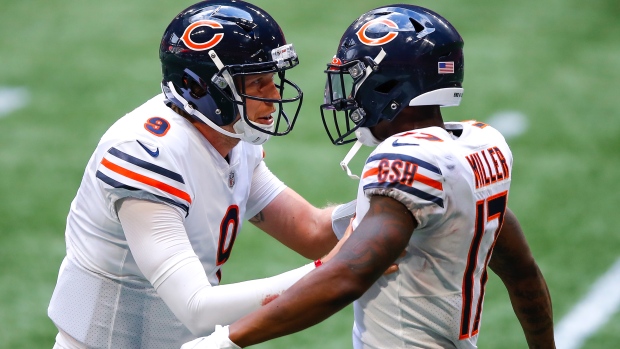 LAKE FOREST, Ill. — Nick Foles made a strong case for being the starting quarterback for the Chicago Bears after a 30-26 comeback win Sunday over the Atlanta Falcons.

On Monday, coach Matt Nagy confirmed Foles had done enough in a relief effort of Mitchell Trubisky and selected the Super Bowl 52 MVP as the Bears new starting quarterback.

Foles had come on in relief of Trubisky following Blidi Wreh-Wilson’s interception in the third quarter, and led a rally from a 26-10 deficit.

Nagy said frustration over the way the offence was struggling in the first half and the interception led to his decision. But he was also irritated by the way the Bears failed to come up with points on their first drive of the game when Cairo Santos missed a field-goal attempt. The coach had seen this type of situation too often in the past.

“We’re struggling on third down, we have 10 points, and then you get to the third quarter and we’re struggling a little bit and it’s an interception,” Nagy said. “And there’s just, you’re down 16, it ends up being a gut feel, you know what I mean?

In the fourth quarter, Foles threw three touchdown passes including a 28-yard TD against the blitz to Anthony Miller for the winning points with just under two minutes remaining. The play was basically ad-libbed by Foles with an adjustment made in the huddle to account for a blitz.

“That’s a strength of his that he has,” Nagy said. “He’s seen a lot of different defences and I think that that will be something when it’s done the right way can be very effective.”

Foles was the Super Bowl 52 MVP in a Philadelphia Eagles victory over the New England Patriots. He went to Jacksonville as a free agent last year, struggled after a broken collarbone and the Bears traded a fourth-round pick to get him largely because of his experience with their style of offence.

Nagy said his team benefited on Sunday from Foles’ experience.

The Bears earlier in the game had run the same play Foles threw to Miller for the winning touchdown, but Trubisky had thrown the pass and failed to complete it. Later Trubisky admitted to Nagy it was a bad mistake.

“I credit Mitch for understanding that and admitting that, and that’s just part of the game.”

Trubisky has started for the Bears since the fifth game of the 2017 season after being the team’s No. 1 draft pick, the second pick overall that year.

Trubisky had completed 13 of 22 for 128 yards with a touchdown Sunday before the interception by Wreh-Wilson set up a field goal for a 26-10 Atlanta lead.

Foles threw a 3-yard TD pass to Jimmy Graham and a 37-yard TD strike to Allen Robinson before the game-winning TD.

The Bears had rallied earlier in the season opener against Detroit in a similar way, overcoming a 17-point deficit in the fourth quarter with Trubisky at quarterback.

“I want to credit both of those guys in yesterday’s situation for being really supportive of each other this whole time,” Nagy said. “Even as hard as that was for Mitch to be told that Nick’s going to go in and play, Mitch was to his credit just an awesome supporter of Nick the rest of that game.

“He flat-out told Nick, ‘I’m going to have your back just like you’ve had mine from the start.’ ”